Pakistanis were enraged as the viral video of famous actress Saba Qamar and vocalist Bilal Saeed hit social media on 8th August 2020. The reason for this ongoing hate and resentment was due to the violation of sanctity that was carried out in the famous mosque of Lahore, Wazir Khan mosque in a shoot, for which Bilal Saeed made an apology now.

From calling both the celebrities out on their insensitive and highly inappropriate stance, both Saeed and Qamar became a target of trolling, Twitterati angst and so much more. Later on, the situation spiraled completely out of hand as people wanted the provincial government to take strict action against the two. 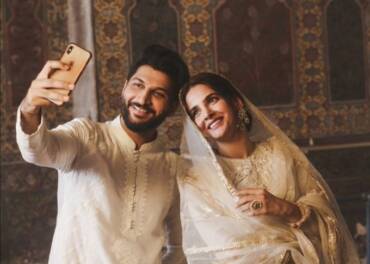 However, Saba Qamar took to social media to apologize to the public of Pakistan and clear the air, about the matter. In addition to that, she mentions that there was no dancing within the mosque, rather they were only taking a single shot for the entire video.

Now even Bilal Saeed is taking to social media to make an apology for their stance and also mentions that it wasn’t their intention to hurt anyone’s feelings shooting in mosque. He adds that there has been no violation of the sanctity of the mosque. He himself nor Qamar would even imagine doing such a horrible thing.

Simultaneously, he explains that the entire video shot that shows Qamar spiraling isn’t a form of a dance sequence, but only a single shot they were preparing for the entire video.

Will both the stars be forgiven?

Now the question that arises is will both Qamar and Bilal Saeed be forgiven right after they made an apology to the public and even took back their stance for the shoot in the mosque. We wonder both the stars be given a chance to reform and correct their claims?

Due to the inconsistent complaints, even CM Punjab has taken the matter into his own hands and has asked for a report on the matter.

We realize what has happened over the past few days has hurt your sentiments deeply. We as Muslims, as decent human beings and as artists will never, ever trivialize or condone disrespect to Islam or any other religion, race, caste, colour or creed. If we have unknowingly hurt anyone’s sentiments we apologise to you all with all our heart. Please find the video below as a sincere apology from myself, Saba Qamar and the rest of the team. . #BilalSaeed #SabaQamar #Qubool #OneTwoRecords

Perhaps, it is important to look at those perspectives and make sure to take strict action on them as well. We hope that both the stars, Qamar and Bilal Saeed are capable of getting things straightened out now that they have made an apology for the shoot in mosque. In addition, we hope to see their collaboration on the song Qubool real soon.