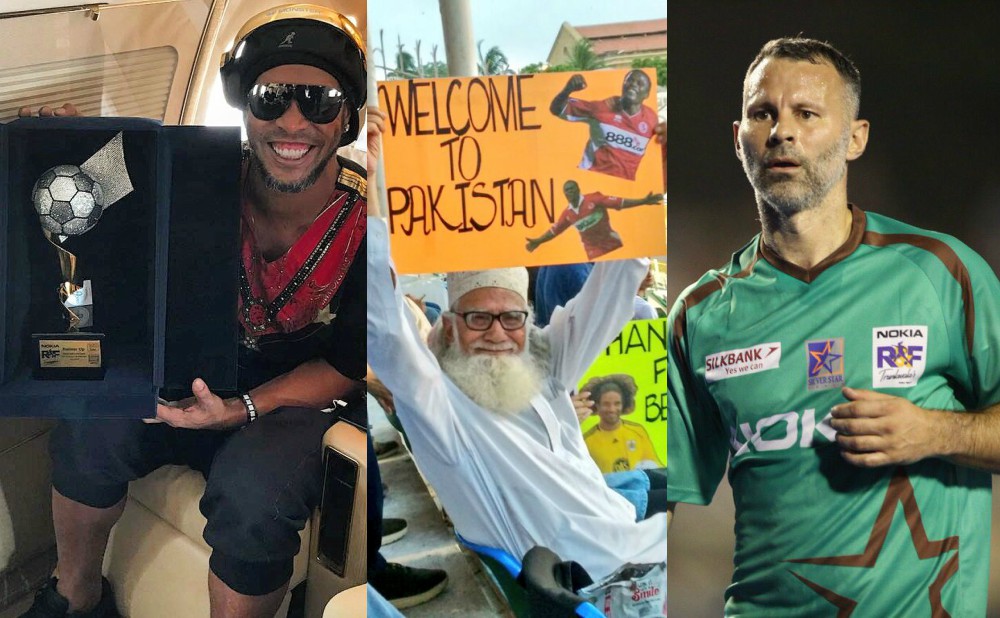 What a time to be alive and what a time to be Pakistani! Pakistani football fans got their wildest dreams come true after some of the greatest players to have ever played came to our country and played football. Ronaldinho and Friends – a two-day event with exhibition matches arranged by the efforts Nokia, Leisure Leagues PK and the rest in Karachi and Lahore on 8th and 9th of July, respectively. Players including Manchester United legend, Ryan Giggs, Barcelona legend, Ronaldinho, Arsenal legend, Robert Pires, Nicholas Anelka, former England goalkeeper David James as well as George Boateng and Boa Morte. It was dream come true for Manchester United, Arsenal and Barcelona fans, to say at least! #UniteForFootball 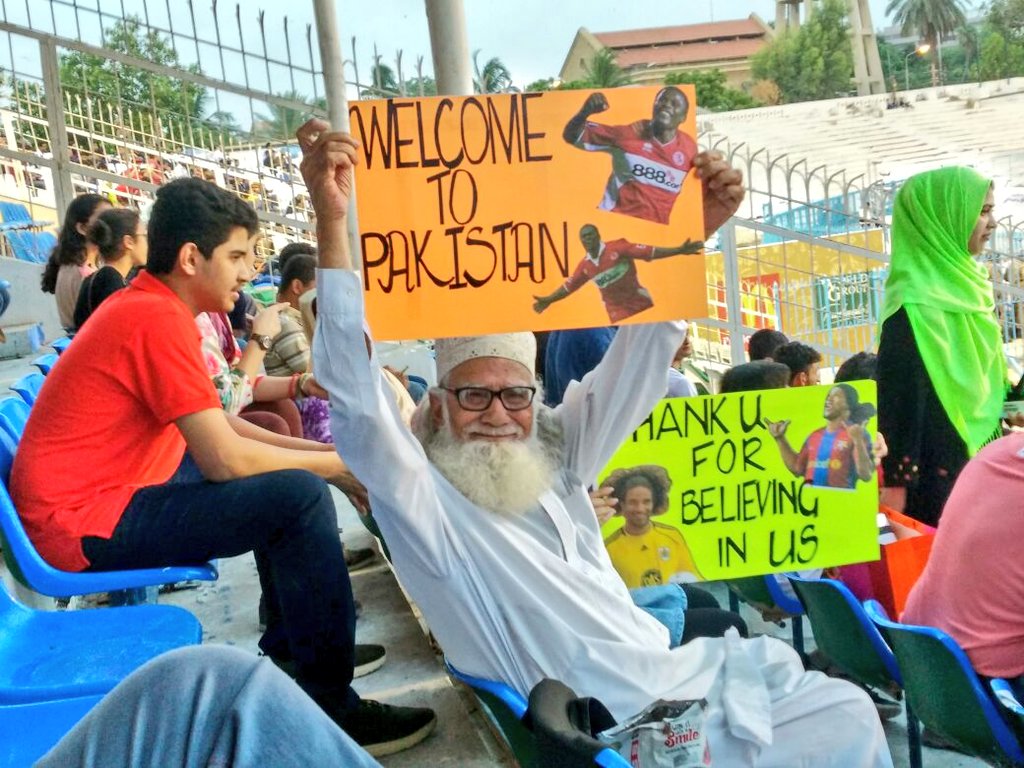 It was all an effort to promote football in Pakistan and gave a vast majority of fans a treat to enjoy. Tickets were sold rapidly and every football fan reckoned not to miss an event that made history in Pakistan. All thanks to the players who joined us and the management behind everything, who’s relentless efforts made it possible. We look back to the past days and counting on some of the best moments that made the past 2 days really special for Pakistanis.

The first day in Karachi, the atmosphere was electrifying. A rift of enthusiasm was blistering everywhere in the city and it seemed noticeable that Karachi was about to witness something insanely special. Karachiites flocking to the Abdul Sattar Edhi Hockey Stadium, even the massive traffic jam did not bother but the need to arrive on time and enter the stadium was on the minds of everyone. The clock was ticking and the crowd was eagerly waiting and before the show had begun, we witnessed a unique performance that happened for the first time in Pakistan.

First ever Laser show in Pakistan

Witnessing this unique performance was a great experience for the crowd.

David James reminding people why he outshined as England’s no. 1 all those years!

Ronaldinho taking a penalty against David James in Pakistan – CAN YOU BELIEVE IT? I couldn’t believe my eyes as I witnessed this moment. An overwhelming sensation took over me and it was a moment no football fan in Pakistan could have even imagined witnessing ever in their lives before. As Ronaldinho stepped up and kicked from the spot, James dived and saved it! Trust me, nobody could handle their emotions!

Karachiites witnessed this moment live just before kick-off. Apart from that, Giggs also mentioned the same during his press conference in Lahore.

“GIGGS TEARING YOU APART SINCE 1991” – Giggs does it again and in Karachi! 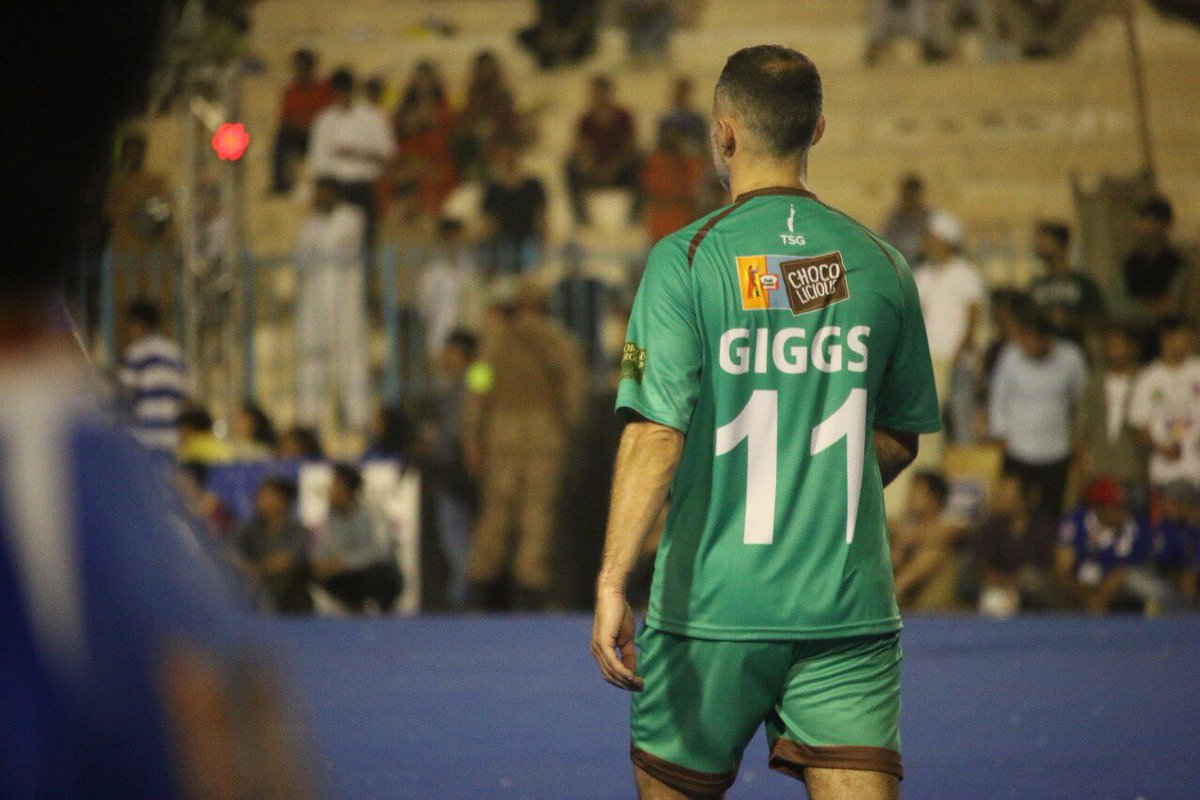 It was before the penalty he saved. Perhaps, he was portraying a few moves before he actually did save it.

A successful “Mexican wave” in Lahore

Tho I was there at Karachi match yesterday, wish I was a part today too. One can never have enough of enthusiastic crowd. #UniteForFootball pic.twitter.com/zUfUk3ujdx

Some butthurt fan did this…

This happened last night. Where an anti Manchester United fan chanting i hat you Giggs and still he is waving hand towards him,wht an idiot+ pic.twitter.com/UsSBMQcOBm

These were some of the moments that remained the highlight in the past two days. We simply are at a loss for words here as for how we should sum up the experience. Big thanks to all the legends who made the effort of coming to Pakistan amid all the political tension and hoaxes of security issues. They defied all the odds and made history in Pakistan.

Before you go, here what these celebrities have to say…

Shout out to all Pakistanis who made it to the games on 8th and 9th of July. Thanks to Nokia and the rest and kudos to all the fans for embracing these remarkable moments. Tell us about your experience during the Ronaldinho and Friends matches in Karachi and Lahore.

These Pakistani Celebrities Are Up To Something Very Strange and Nobody Can Tell What’s Happening
Revealed: This Unexpected Truth Behind Doraemon and Nobita Will Change Your Perspective on this Show
To Top