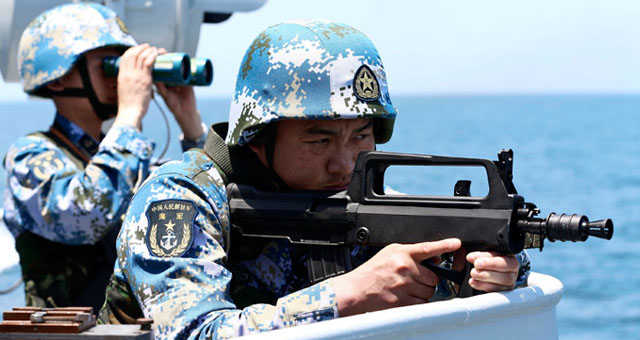 China is increasing military spending, particularly through â€œunprecedentedâ€ modernization of air force, the Pentagon said in a report. Beijing rebuked the document as â€œpreposterous criticisms of China’s normal defense and military building.â€

Beijingâ€™s military spending last year exceeded $145 billion, assessed the US Department of Defense on Thursday in its annual report to the Congress. The estimate is more than 20 percent higher than the official Chinese figure.

â€œChina has the fiscal strength and political will to support defense spending growth at comparable levels for the foreseeable future,â€ the report said. â€œContinued increases will support Peopleâ€™s Liberation Army (PLA) modernization efforts and facilitate Chinaâ€™s move toward a more professional force.â€

The report admits that assessing the amount of military spending by China is difficult due to â€œpoor accounting transparency,â€ failure to include foreign weapon procurement into military budget and close ties between Chinese civilian and military production, where dual-use technology is involved.

“Year after year the United States issues this so-called report on ‘Military and Security Developments in Chinaâ€™, making preposterous criticisms of China’s normal defense and military building, exaggerating the ‘China military threat’, which is totally wrong,” the ministry said in a statement on its website.

“As for the detailed contents of this year’s US report, we are currently assessing it, and will react further, depending on the situation.”

Chinese diplomats were more restrained and called on the US to â€œobjectively assess the defense potential of China.â€

â€œChina is guided by its own interest in building up its military potential,â€ said spokesman for the Foreign Ministry Hong Lei.

Xinhua news agency called the report â€œbiasedâ€ and pointed out that US own military budget exceeded $600 billion in 2013, according to the International Institute for Strategic Studies.

The Pentagonâ€™s report gave an overview of the latest effort to modernize Chinese military in various service branches as well as Chinaâ€™s participation in international military and security events. The report particularly pointed out the investment into PLAâ€™s Air Force, which is already the biggest in Asia and third-largest in the world.

â€œThe PLAAF is pursuing modernization on a scale unprecedented in its history and is rapidly closing the gap with Western air forces across a broad spectrum of capabilities,â€ the document said.

â€œAlthough it still operates a large number of older second- and third-generation fighters, it will likely become a majority fourth-generation force within the next several years,â€ it added.

Chinese military may further improve their capability to dominate airspace through purchase of Russian S400 air defense system, US military planners say. Beijing is also in talks with Russia on a possible deal to buy advanced Sukhoi Su-35 aircraft, which would also bolster its military fleet.

Domestically, the modernization includes the ongoing development of the second prototype fifth-generation fighter, the J-31 and the continued upgrade of the G-6 bombers to carry land-attack and anti-ship cruise missiles, which is giving China â€œa long-range stand-off offensive capability with precision-guided munitions.â€

The Chinese Navy may see a delay in developing its domestically-build aircraft carriers, which the Pentagon believes would become operational in the beginning of next decade as opposed to earlier forecast for end of this decade. But the PLAN is heavily building new surface ships and submarines with advanced capabilities, which could be used to back up Beijingâ€™s territorial claims.

This year China is expected to deploy its first Luyang III-class guided missile destroyer, which has Chinaâ€™s first multipurpose vertical launch systems. Along with an expanded fleet of Jiangkai II-class guided missile frigates, the Chinese Navy will get a significant upgrade to area air defense capability, â€œwhich will be critical as it expands operations into â€˜distant seasâ€™ beyond the range of shore-based air defenses.â€

The Pentagon noticed other new advances demonstrated by China, including the development of new space and counter-space capabilities. In addition to other space launches, Beijing tested its first quick-reaction launch vehicle Kuaizhou, which can deploy a small satellite of the same name in response to an emergency, like a natural disaster or a military flashpoint. Another vehicle with a similar purpose, the LM-11, may be tested this year, the report says.

While a military conflict with Taiwan is a primary contingency for PLA, the cross-strait relations are currently warm enough and are directed at closer economic ties, that would potentially help mend the political divide between Beijing and Taipei, the report said. At the same time China is preparing for possible conflicts with other regional nations. For instance it is fielding more lethal and numerous conventional medium-range ballistic missiles, which â€œimprove its ability to strike not only Taiwan but other regional targets.â€

Another example is the joint naval exercise of all three Chinese fleets in October 2013. The Maneuver 5 drill in the Philippine Sea was the largest open-ocean exercise of the PLAN to date.

In addition to holding its own exercises, China increasingly participates in international training events, the Pentagon said. This gives Chinese military â€œopportunities to improve capabilities and gain operational insights by observing tactics, command, and equipment used by more advanced militaries,â€ the report said.

In 2013, the PLA â€œconducted seven bilateral and multilateral exercises with foreign militaries, three of which were with Russia.â€ Beijingâ€™s closer military ties with Moscow were also stressed by the first overseas demonstration of the Chinese Air Force Aerobatics Team in Russia in August 2013.