The type of music which provokes your soul has no religious boundaries. In the peaceful blend of lyrics and soothing music, we lose ourselves. We surrender ourselves to the words which remind us of our love for Him. Despite who is singing it, despite what his or her background is, we lose ourselves in His love.

One of the recent songs which calm our nerves is the beautiful Kun Faya Kun, a song composed by Oscar-winner AR Rahman and sung by Mohit Chauhan. The wonderful lyrics of the song, with the blend of pleasant vocals and music such as of qawwalis makes the listeners lose themselves in the aura.

Originally, the song was composed for Indian film Rockstar. While the song originally gives you goosebumps, the cover by Berkley College of Music takes the mesmerizing feeling to a whole new level. What makes their cover even more outstanding is that the orchestra and choir are filled with students from different nationalities and religious backgrounds. 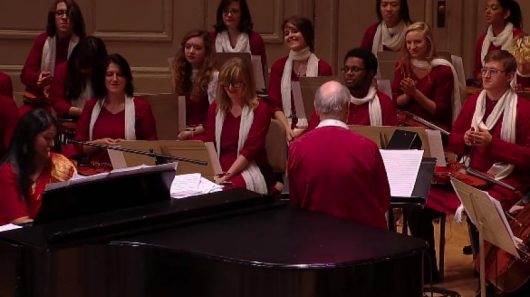 Being from different backgrounds and following different religions, the students perform a mesmerizing cover of a song which highlights the love for Allah and Prophet Muhammad (SAWW).

It is one of the most peaceful and melodious covers of the song and despite the religion it highlights, the students covered it beautifully.

Here’s the Link to the Cover by Students

Watch the video and notice how such diverse ethnicities sitting under the same roof are calling the love of God in such a lovely manner.

Music that provokes your soul has no boundaries – not race, not religion.

A Young Pakistani Bowler Nearly Took His Life During a Live Match in Lahore
This ‘Zombie Drug’ is Turning People into Cannibals and it is nothing but Scary!
To Top