Animal cruelty is one of the saddest forms of inhumane practices that have become quite common throughout the world. A devastating and rather disturbing incident of bear baiting took place in the city of Rahim Yar Khan.

Two brothers, Haq Nawaz aka Haqqu Fakeer, and his brother organized an entire event of bear-baiting with a lump sum amount of gambling on the animals in Rahim Yar Khan.

⚠️ Animal Cruelty⚠️
Despite it being illegal and forbidden by Islam,bear baiting continues under ground in #pakistan with huge sums being gambled on the outcome.This fight took place in Haji Poor Tehsil Rahim Yaar Khan and organised by Haq Nawaz aka Haqqu Fakeer and his brother pic.twitter.com/jaf2izwBWr

Even though these practices tend to violate the lessons and message of Islam, they are still carried out. In addition, these practices are completely based on animal cruelty and are extremely violent and disturbing, to say the least.

Now as you all might wonder what is so horrific about this sport; well here it is. The sport of bear-baiting is a horrific blood sport, where the animal, which is the bear, is tied to a place and wild dogs are set after it like the one recently happened in Rahim Yar Khan. Along with that, the bear is also tormented and worried through different tactics, after which the audience bids on which animal will win.

Sad and traumatizing, both Islam strictly condemns the practice of animal cruelty. Time and time again, the role and importance of animals have been mentioned in the Holy Quran.

‘We have made animals subject to you, that ye may be grateful’. Surah Al-Haj 22:36

In another context Prophet Muhammad (PBUH) Hadith also states, “It is a great sin for a man to imprison those animals which are in his power.” (Hadith: Muslim).

It is sad to see that the importance and role of living beings are being forgotten by humans on a daily basis. This bear baiting sport in Rahim Yar khan is just a small example of it. Just a while back, a traumatic incident where 15-year-old boys raped a Kitten, shook the people to the core. 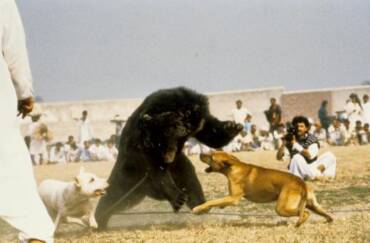 Not only this, but it also seems people have forgotten the importance of lives and are often negligent to animals. Take the Bakra Eid 2020 incident as an example. A number of sacrificial animals became a victim of abuse on different occasions. Such as the sacrificial goat in Gadap Town, which almost became a meal to the street dogs.

So the question is, why are ‘Muslims’ enjoying this forbidden sport so immensely? And why is no action taken on the matter as of yet? In the end, we are hopeful that the government takes notice of these crimes of animal cruelty and bear-baiting that happened in Rahim Yar Khan real soon.

Why This ‘Lockdown Ke Side-Effects’ Web Series Is A MUST Watch!
WATCH: A Vigilant Karachiite Foils A Theft Attempt In His Neighbourhood Like A Hero
To Top