Beaconhouse Issues Its Official Statement Regarding #BoycottBeaconHouse And People Are Still Not Buying It! 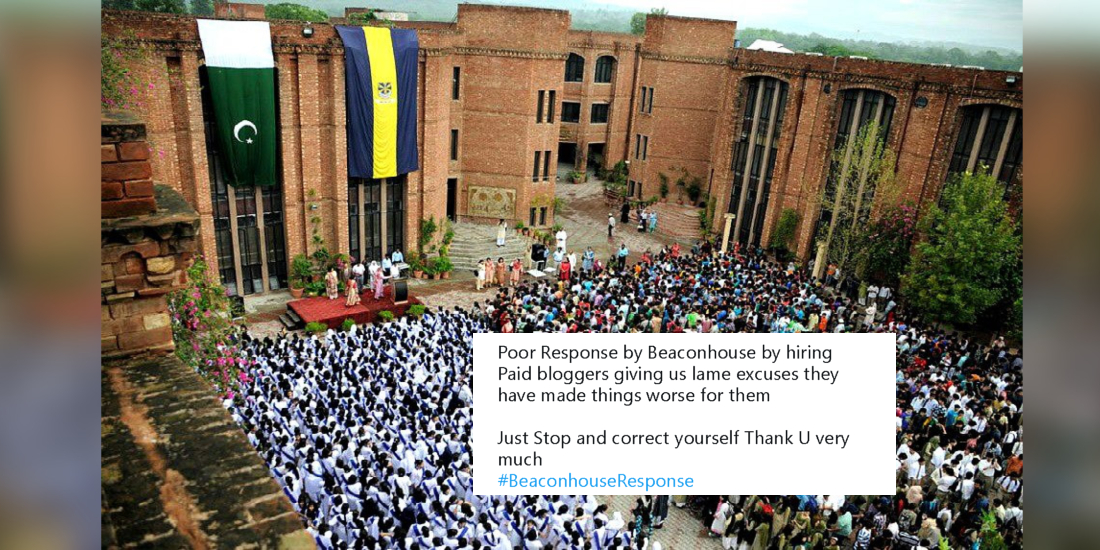 Beaconhouse in the past shut the twitteratis when they questioned the school upon releasing the notice of “not using the foul language” and the foul language includes; abuses, taunts, and Pubjabi. To which people were cross and asked beacon-house to look into this and how can they ban a language just like that?! Beaconhouse back then quickly responded to these tweets and responded by saying that the writer of the notice wanted to say “Punjabi (swears)” Oh well!

But this time, what caught people’s eye was shocking! This question paper from Beaconhouse has a doubtful question

Which eventually created a major social media outburst and people started questioning many things from Beaconhouse!

From all those questions this is one of them! Non-Pakistani writer for Pakistan History

After this issue got worse and people started calling Beaconhouse “Enemy of the state”. The institute finally had to come out and respond to these people!

Beaconhouse is deeply grieved to note a sudden flurry of social media activity labeling it an ‘enemy of the state’. This engineered hate campaign on 3 major social media platforms cannot be further removed from reality. The spirit of patriotism and commitment to our beloved land is deeply embedded in all Beaconhouse students, employees, and owners. Our students demonstrate pride in their national identity, even as their achievements take them to global platforms. Moreover, many of our schools have been operating in army cantonments for decades and we feel privileged to be a school of choice for the defenders of our country.

This hate campaign was initially launched by an ex-employee of The Educators who was terminated for physically assaulting his line manager. An FIR was lodged against this individual on 26-12-2017 as well as a defamation suit in the District Court Multan on 06-04-2018 and a criminal complaint in the FIA Cybercrime Circle on 24-02-2018. This individual, however, does not alone have the capacity to sponsor a campaign of this magnitude. He has become a willing pawn in the hands of certain media individuals whose motives are still unclear. What is 100% clear, however, is that this hate campaign is not organic. It is fully engineered and sponsored, and we have lodged another strong application with the FIA Cybercrime Circle to identify and take action against these miscreants.

The core issue in this campaign pertains to the highly regrettable but inadvertent misrepresentation of the Pakistan map in the textbooks of The Educators. The Educators has in the past acknowledged this human error and apologized to its parent body. Attempts have been underway to rectify it since 2015 when this was first brought to light. This process has however taken longer than expected because there are 267 images of the Pakistan map in 21 textbooks/workbooks/teachers guides for Social Studies, History and Geography from Classes 1 to 8 featuring political borders, population density, rainfall, topography, and Pre-Partition maps. Many of these maps have since been corrected, but unfortunately not all mistakes were identified on time, resulting in further misprints in 2016.

All textbooks of The Educators have once again been proofread and the proposed drafts submitted to the Punjab Curriculum & Textbook Board (PCTB) in May 2018 for their official approval, which is now awaited.
If The Educators truly wanted to promote an anti-Pakistan agenda, why would it have correctly represented political boundaries in the majority of the maps? Moreover, since the real target of this hate campaign is Beaconhouse, why has Beaconhouse not made the same blunder in its own textbooks?
Answers to the above may be deduced by any reasonable and fair-minded person: that it was nothing more than human error.

The persons behind this campaign have also stitched together other falsehoods to create a compelling ‘anti-Pakistan, pro-West narrative’ including:
1) Lying that Beaconhouse exclusively uses a certain OUP Pak Studies textbook; in fact, this book is prescribed by many leading private schools as well as Army Public Schools (which may be easily verified). Why has Beaconhouse then been singled out?
2) Falsely attributing a past exam paper for Pak Studies (excerpts of which have been shared on social media) to Beaconhouse. This is in fact a Cambridge O Level exam for all Pakistani students. Why has Beaconhouse been singled out?
3) Highlighting ‘objectionable images’ of children’s extra- and co-curricular activities from Beaconhouse Schools that are similar to activities at all good private schools that aim to provide a holistic education. Why is Beaconhouse being singled out?
4) Posting Memes, digitally altered images, videos, and much more.

This has all been done purposefully, professionally, and in an engineered manner on all social media platforms with the clear intent to harm Beaconhouse. While the engineers and paid promoters of this campaign clearly have an agenda, it has troubled us that many social media users have unthinkingly shared their lies without questioning how Beaconhouse has become a ‘traitor’ overnight. Have we truly become a society that harbours so much hate that we will give no person or institution the benefit of the doubt?

Beaconhouse’s unwavering patriotism is not mere rhetoric. We have come forward during national emergencies such as the 2005 earthquake, 2010 & 2014 floods, and 2014 IDP crisis by providing emergency food and medical assistance, rebuilding 6 government schools and 21 computer labs, and donating generously to the government’s disaster relief funds of the time. Moreover, we have established the not-for-profit BNU, taken over 48 government schools in Gujranwala where learning standards have been significantly raised, assumed responsibility for 4 government preschools in ICT and 4 schools at SOS Children’s Villages, and built children’s facilities at the Children’s Hospital Lahore, amongst countless other initiatives. Over 14,000 students study on scholarship and financial aid at Beaconhouse alone, not including The Educators. Finally, Beaconhouse is one of the largest taxpayers in Pakistan – as well as one the largest employers of women in the private sector. These are not matters that we have ever wished to highlight in this style before.

To conclude, Beaconhouse and The Educators deeply regret the pain caused to our community by individuals with vested interests and hidden agendas. We ask all our students, parents, employees, and alumni to stand with us in the face of this engineered hate campaign. We ask our teachers to tell the world exactly what values they impart, and our students to shed their own light on the ‘insidious agendas’ of Beaconhouse. As Pakistan’s largest school network, we don’t doubt that we will continue to be targeted by hate-mongers in the future, since this kind of intimidation and blackmail have become endemic to social media, but are certain that the core Beaconhouse community will never doubt our commitment and unparalleled service to our beloved country spanning nearly half a century.

After their response, people are more furious and dig more issue regarding the institute!

Because beaconhouse started this vulgarism and other institutions has to follow it. Its business just business , they have to match their products otherwise they will loose business. Instead of defending some one we should crticise all of them

Well, here we have many questions for which Beaconhouse might not have an answer for

Is this the right way to teach???
Is this our Islamic and Country's culture???#BeaconhouseResponse pic.twitter.com/fQbuW2cygj

However, there aren’t many people who are okay with the statement given by Beaconhouse!

Government or authorities are yet to declare their stance on this issue, but beacon-house sure needs to careful now. Playing with curriculum on the topic of national interest could go very dangerous.

According To Islam, Here Are The First 3 People To Enter Hell
Reckitt Benckiser’s Project Hope Is About To Change Many Lives In Pakistan And Here’s What You Need To Know
To Top