A renowned Barrister, Huma Price has written a note for Sharmeen Obaid-Chinoy and the entire epidemic of controversy surrounding her. The barrister’s message is an open Facebook post that is being read by thousands of Pakistanis. Many people actually agree with the 16 reasons provided by Huma, a barrister/broadcaster based in the United Kingdom.

Recently, Sharmeen Obaid broke her silence on the whole controversy; here’s what she said: 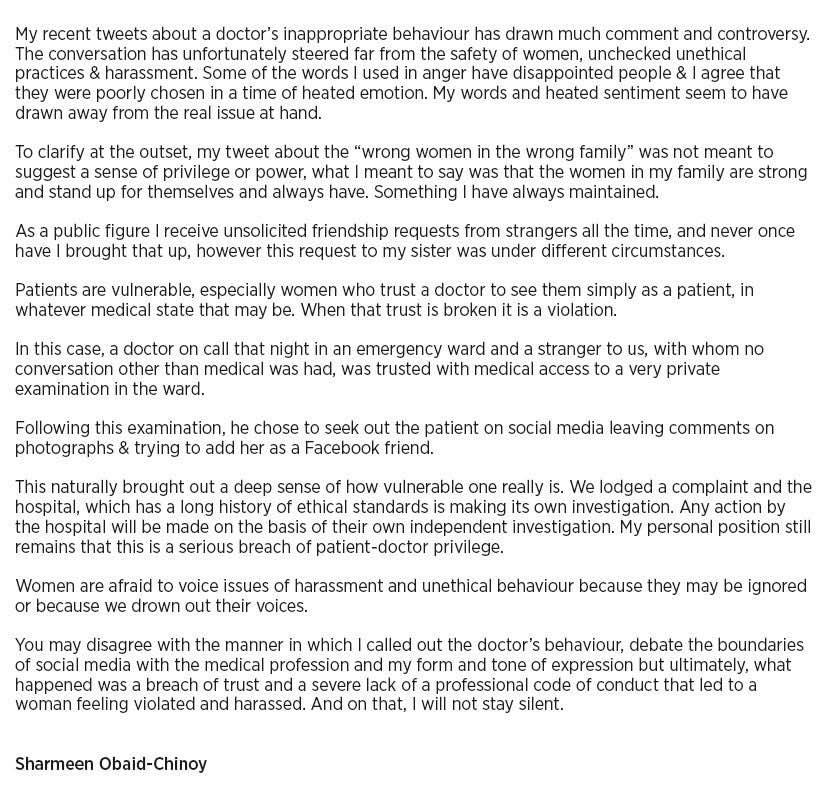 Here is what she has to say:

1. Firstly, you say that “the women in my family are strong and stand up for themselves and always have”. I simply don’t believe you. If the women in your family had been empowered your sister would have dealt with this issue on her own without hiding behind you, her celebrity sister to fight her battles for her.

2. Secondly, she could have exercised her choice of rejecting the Friend Request on Facebook, blocking the Dr, and then if he persisted, she could have complained about him without bringing you in the picture; without even mentioning that she is your sister. It would have been interesting to see what the Hospital had done if they didn’t know they were dealing with celebrities.

3. If they had done nothing, you could then have made all the comments quite legitimately about how harassment goes un-tackled as there are “zero-boundaries” in Pakistan. Let me tell you about one boundary I have observed, it is the one that divides the rich and powerful from the working classes. And you know which side you stand on. And you exploit your position for personal gains.

4. I suspect there was a discussion in your house after the Facebook request, a decision was then made that you as the famous one will take this matter up with the hospital. In fact, you used your fame to create a lot of noise by confusing a case of unethical behavior with harassment, trivializing a problem that devastates many women’s lives. In the process, you got a father of four dismissed from his job.

5. And is your sister so totally unaware of the privacy settings on Facebook? The new information that you have now revealed that he had also liked some of her pictures before adding her suggests that your sister puts photographs up as “public” posts. That is why someone who is not her friend is able to see them. The poor dear urgently needs a course in Facebook Privacy settings.

6. Even in this letter (below), you have used strong language “Severe lack of a professional code of conduct that leads to a woman feeling violated and harassed”. If only your sister knew of the severity of harassment many women go through on a daily basis in this world. The reason it doesn’t get dealt with is because arrogant women like you who fancy themselves as activists raise it as an issue only when it suits you.

7. Oh yes, are you aware that Dr. Jawad was also accused of sexual harassment? You know the Dr you used in one of your documentaries. Maybe you will recognize him from the picture below. I understand even after he was investigated for sexual harassment of his patient you went to his Clinic launch party? Is it only people who are in a lower status to you that have to be taught a lesson for “harassment”? 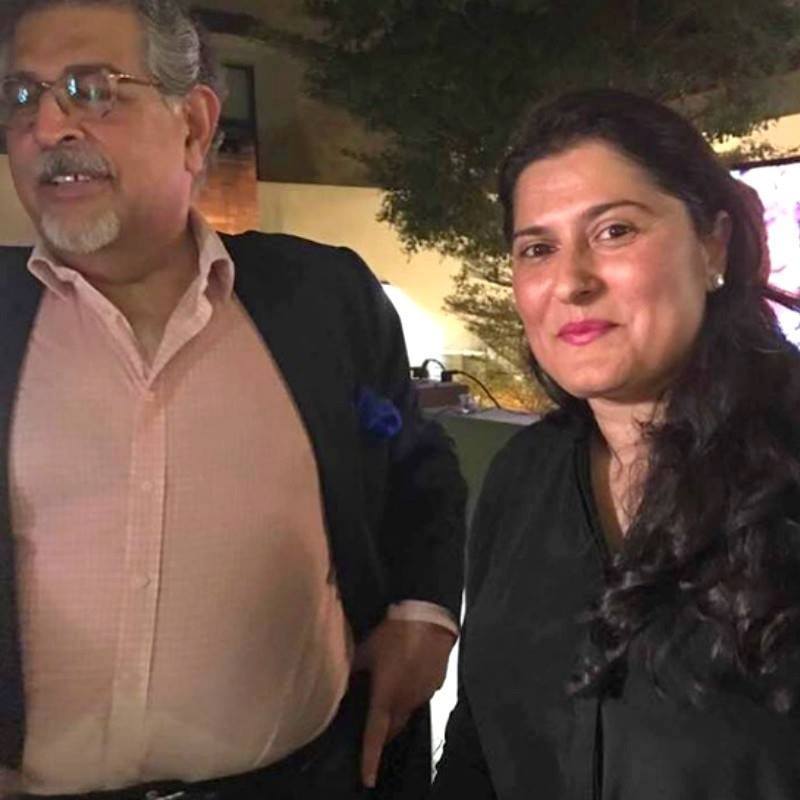 8. Thanks for caring so much for women that you got this Dr dismissed although I am still fairly sure you did it because you were incensed that he had the nerve to think he could become friends with the great Chinoy “family”. The cheek of it! How dare he be friends with and seek to network with the superstars who have been to Hollywood!

9. That is the sum total of your strength; your fame, isn’t it? You are not really that strong otherwise, are you? You see truly strong and powerful women don’t behave like you do. So if a powerful woman had been in your place she would have first and foremost protected her sister from the public by NOT announcing this issue on social media.

10. She would have supported her sister to recover from her “ordeal” and then take reasoned steps to deal with the doctor. Powerful women stand behind vulnerable women and empower them to become strong and deal with their own issues. What powerful woman most definitely don’t do is have an emotional rant on social media that drags country and nation into question.

13. Most of all powerful women are compassionate, not arrogant. They care about the weak and vulnerable regardless of gender. So a powerful woman instead of going off on her high horse would stop and think of all the people who would be affected by her actions. So how many vulnerable patients do you think would be affected if you take out a Doctor in a busy Accident and Emergency ward?

14. So you didn’t care about the patients presumably as that would have included men too and you only take up the cause of women so the men can damn well suffer even if they are ill and in need of an emergency doctor. But did you stop to think about the consequences of your actions on an innocent woman who had four children to worry about? Yes, the Doctor’s wife.

15. Did you stop to think about the stigma four innocent children would have to suffer if their Daddy was accused of “harassment”? They may not understand the difference between sending a friend request and groping a female patient while examining her, something that would have amounted to harassment. Are you aware of the trauma you have exposed these poor innocent children to both socially and in their relationship with their father?

16. If a truly powerful and strong woman had dealt with this issue we wouldn’t even have known about it. But it was dealt with by a powerful celebrity rather than a victim seeking justice so it has become a national controversy. It was actually not about vulnerable women and their rights but about the supreme rights of a privileged family to privacy and the protection of it from what they see as riff-raff.

But you know I don’t need misguided, arrogant, emotionally unstable women like you who have developed no responsibility or humility after reaching a position of fame to fight for my rights. You don’t even know what harassment is. I really don’t need you representing me or fighting for my rights. You have lost my trust and I know many others feel the same.