Journalist Hassan Zaidi Got A Bank Alfalah Employee Fired From Job For Abusing Him And People Are Furious!

Workplace ethics matter the most when it comes to working in the banking sector. The sectors lying within the corporate manner adhere to their created rules and regulations. Every company has its own policies regarding its employees and the strict guidelines need to be followed or else the consequences can be unfavorable.

Recently, a renowned bank in Pakistan came under hot waters after a quarrel between a known filmmaker/journalist and one of its employee erupted on Twitter. The higher authorities of the bank took swift action and without even investigating much about the issue, fired the employee. As the issue broke out among the general public, a massive uproar was seen on social platforms.

The truth behind the firing of Bank Alfalah’s employee!

Labeled as the 5th largest bank of Pakistan, Bank Alfalah recently fired its Unit Head (Financial Reporting), Fazeel Tajamul who also happens to be a Certified Chartered Accountant from ICAP. It all started when the employee got into an argument on Twitter with a known filmmaker and journalist, Hasan Zaidi. In a previous tweet, Zaidi shared his personal opinion on the performance of the current PTI government to which Tajamul replied with hate speech and it gradually turned into a heated argument.

Well, upon digging deep, it was found that Tajamul has been a carrier of hate comments and personal attacking from quite some time. His Twitter handle was filled with unpleasant tweets and offensive replies to various famous personalities of Pakistan. It is even believed that Tajamul is also a misogynist who has made some serious allegations against different women at times. Whereas, Zaidi is said to have direct links with Bank Alfalah’s CEO Nauman Ansari which actually resulted in the instant action against Tajamul.

The reason behind the massive brawl! 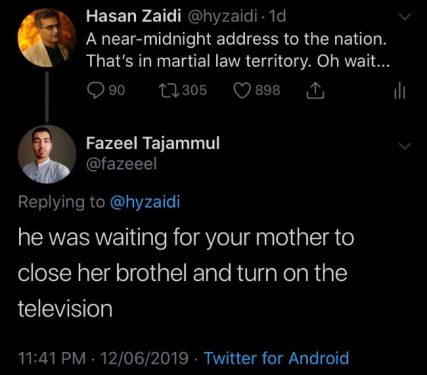 Zaidi shared the employee’s LinkedIn profile and his vile reply!

Dear @BankAlfalahPAK, this man works for you? Is this the level of scum you employ? pic.twitter.com/u8HbCgNS2k

Another tweet was added regarding the anchor Sana Bucha!

Another ‘gem’ from your ‘Unit Head Financial Reporting’ @BankAlfalahPAK @BankAlfalah Please, tell me how it’s not a case of sexual harassment? #MeToo #metoo pic.twitter.com/ISR3VUfCEk

Also read: JS Bank Signs On As Title Sponsor For Pakistan-Australia ODI Series And This Is Absolutely Brilliant!

The bank later issued an official apology to its customers and that they don’t support this sort of attitude from their employees.

Therefore, there was a display of mixed opinions on social media and the hashtag#BoycottBankAlfalah became a trend on Twitter. Some were in favor of Bank Alfalah while the majority were supporting Tajamul. The real question that arose was why is Bank Alfalah concerned of anything done by its employees after working hours? Apparently, no statement has been issued by Tajamul till now and the issue is still being discussed on the internet.

Have something to add to the story? Write to us below!

Pakistan Army Is Making Us Proud After Winning The International Military Drill Competition In UK!
Tuba Aamir Gave A Cracking Reply To Aamir Liaquat’s 14-Year-Old Daughter And This Internet Fight Should Stop!
To Top