Balochistan University's VC Resigned After Being Accused Of Misconduct!

In this uncertain time when the least expected turns out to be true, harassment cases have taken over ordinary lives. After the entertainment industry, the specified element is shattering the educational aspect of Pakistan.

Only in the last few years, numerous cases have been reported by different educational institutes regarding physical abuse. Earlier this October, another similar case made it to the news from the University of Balochistan (UoB) and recently, its VC resigned facing accusations of misconduct.

University of Balochistan (UoB)’s VC stepped down for fair inquiry!

Unfortunately, stories related to the maltreatment of students in educational institutes make it to the news very often. Two weeks back, a student of Comsats University in Islamabad died of management’s gross negligence.

Recently, a mass student protest broke outside the University of Balochistan (UoB) in Quetta after its Vice-Chancellor (VC) Javaid Iqbal came under harassment charges.

Last week, the VC of Balochistan University resigned after bearing charges of misconduct from female students on the campus. 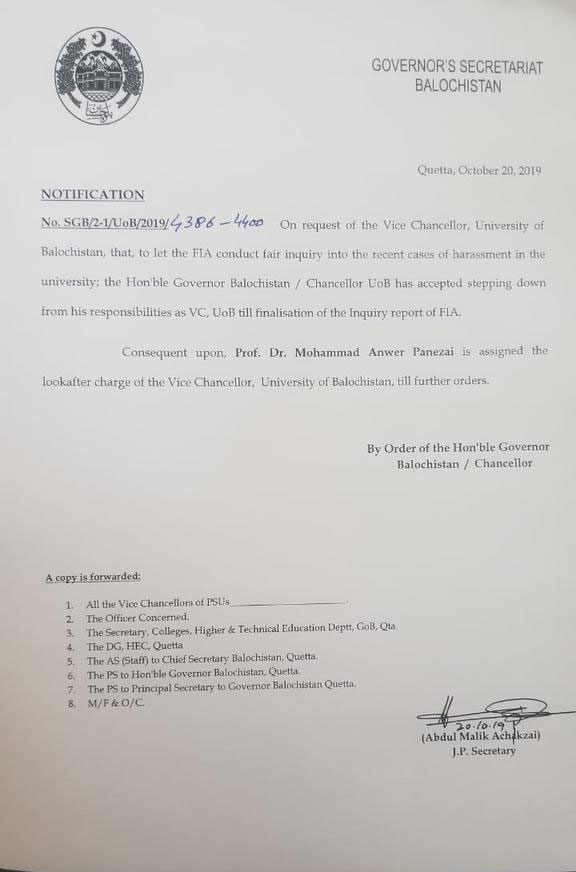 As per the official release issued from the Governor’s Secretariat of Balochistan, VC Javaid Iqbal’s decision of resigning from his post is accepted. Apparently, the decision was made in response to the harassment allegations he was facing since the start of October.

Moreover, the letter stated that the VC stepped down to make sure the investigation is fair. Now, Professor Dr. Mohammad Anwer Panezai is appointed in his replacement until further notice.

FIA’s statements regarding the harassment scandal!

While the FIA probe is getting tensed with time, former VC Javaid Iqbal has rejected all allegations and stated, “These allegations are based on lies. Achakzai is not even a professor. He is a lecturer but claims to be a professor. He has been involved in appointing people illegally.” Well, the FIA hasn’t made any major arrests till now and if they did, it will be through an official media presser. 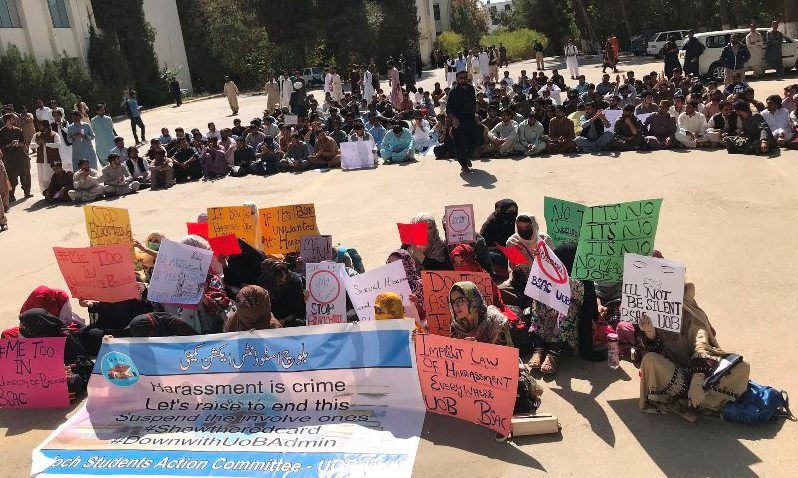 Reportedly, the varsity’s vice-chancellor and the administration were involved in harassing female students. However, the media is portraying that hidden cameras were installed all across the campus on VC’s orders.

Later, the objectionable recordings were used in blackmailing and threatening female students of the university.The Federal Investigation Agency (FIA) is probing the scandal since the start and has revealed many unexpected details till now.

According to an FIA official, up till now, 12 videos of female harassment have been traced. The perpetrators were some of the officials from the university’s administration also. Students are protesting against the University of Balochistan (UoB)’s administration for misconduct and reveal the filthy attitude of the institute’s higher authorities. However, the FIA is all hands in to reach the final verdict of the case and provide justice to the female victims.