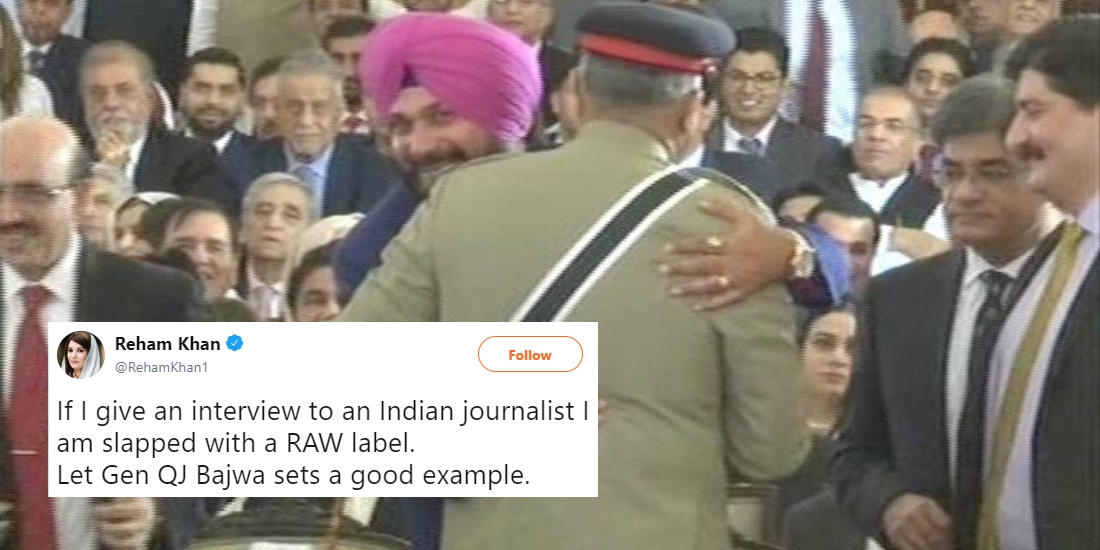 Another day, another controversial post by Reham Khan on Twitter. Honestly, it feels like she’s made a habit of this. Every other day, she posts a Tweet that goes viral and hundreds of PTI supporters start trolling her in the comments.

This time, her tweet was in response to something. Navjot Singh Sidhu (ex-cricketer, politician, and television personality) came to Pakistan for the Prime Minister’s oath-taking ceremony. A picture of him hugging it out with our army chief QJ Bajwa was greatly appreciated by people spread across both nations.

This must have really irritated Reham Khan. How do I know that? The same way the rest of the world does – through Twitter.

If I give an interview to an Indian journalist I am slapped with a RAW label.
Let Gen QJ Bajwa sets a good example. https://t.co/zwFG1Rr7Rh

Before I continue, I would like to say that her Tweet isn’t wrong in principle. Thousands of Pakistanis are quick to label people they dislike as RAW agents (Malala, Jibran Nasir, etc.) and that is wrong. Just because someone disagrees with you on something doesn’t mean they’re a spy sent from India.

But Reham Khan’s comparison in the tweet is very off as well. Why on earth is she comparing herself (ex-wife to the current Prime Minister) to the leader of Pakistan’s army? They both are entirely different positions.

My point exactly! Reham Khan could have literally used anyone else to compare herself with and I would have been on her side.

Apparently @RehamKhan1 has hard time coming into terms with reality especially with her ongoing war with common-sense!

Someone please tell her there’s difference between meeting with India in official capacity and making stuff up, lying about PTI & calling Pakistan failed state!

Even though this reply is not really addressing the issue, the person makes a good point. General Qamar Bajwa met Najvot Singh Sidhu in an official capacity. Sidhu himself is the Minister of Local Government, Tourism, Cultural Affairs, and Museums of the State of Punjab. Meeting a foreign dignitary with respect is to be expected of a leader of the army.

Hahaha yes for a women it is very hard to see

Then there are sexist and misogynistic people like Haider Abbas over here that make fun of women while missing the point entirely. Bash Reham Khan for her thoughts and ideology as much as you want. But if you’re gonna undermine her just because she’s a woman, please delete your twitter account and avoid showing your face in public. We’d rather not look at it.