What! King Of Bahrain Arrives In Dubai With Robot Bodyguard Fitted 360 With Cameras & In-Built Pistols?

The minute we all walked out of the theatre or watched the film, ‘Terminator’ and ‘iRobot’ the fear of a robot revolution has given us the chills. However, it seems the nightmare might be coming true after all.

Recently, videos were circulating showing the King of Bahrain arriving at an exhibition in Dubai with an extraordinary and unusual surprise. A robot bodyguard!

In an exhibition held in Dubai, the media and all the people were blown away with both amazement and horror as the great King of Bahrain walked in with his robot bodyguard stomping its feet behind him.

His robot bodyguard took social media by a storm and everyone was feeling giddy and in shock to see a complete robot walking within the crowd. 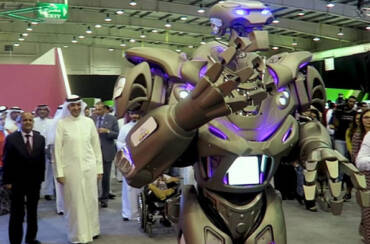 The most exclusive features of this high-tech robot are that it comprises of about 360 fitted cameras and built-in pistols. If the film ‘Iron Man’ didn’t give us goosebumps, this real-life robot surely is.

It is mindblowing and extraordinary and proves to be one of a kind invention. The notion that sci-fi is about to touch the sky is an understatement when it comes to this bodyguard, to say the least.

Viral video of the robot bodyguard and netizens

While the video is insanely going viral on social media and netizens are pouring in their thoughts, it is truly inspiring to watch this robot walk, stomp, and turn to check the crowd for safety. No wonder, it won’t be long when politicians around the globe would prefer to have one of these bodyguards for their protection.

King of Bahrain arrives in Dubai with his robot bodyguard fitted 360 with cameras and in built pistols. Technology moving very fast than ever in history. Now politicians might order this too pic.twitter.com/YK8aI65z4N

Ironically, some people are fearful, that if this robotic gadget gets in the wrong hands terrorism and hacking crimes might become more easy and harmful to civilians – can it be said that this is also a chance of the beginning of the apocalypse?

Is this REAL? If so there will soon be Robot Terrorists and like Hackers they will always be one step ahead of the Establishment mob? Hi Sci Fi !!!

While many are using this opportunity to joke and troll, some are lauding the evolution of science and technology.

This is quite possibly the coolest, and scariest, thing I have ever seen 😳

Oddly, some are commenting on how the film ‘Terminator’ is about to become an actual reality very soon.

Here’s the truth about the robot

The irony of the entire situation is that this robot was not actually a bodyguard, rather a part of the projections presented at the exhibition and the video is also not recent but an old one. It is funny how people can just make up anything from thin air.

Perhaps the world really is changing and perhaps it is now time to prepare for the inevitable to happen. Besides, shouldn’t we be ready for the end anyway? At least, we would get to see robots come to life! That has to be cool right?

All in all, we are truly impressed and a little bit freaked with this mind-blowing invention. As a matter of fact, we wonder how many of these robots will be ordered if they were to come here to protect Pakistani politicians. Albeit, the fact that such inventions prove that the world is indeed progressing; there is always the risk of the repercussions it might have. Recently, robots in Japan wore gowns during a virtual graduation ceremony also.