Azerbaijan: A Country Where Values Are Protected And Religious Tolerance Is Highly Ensured 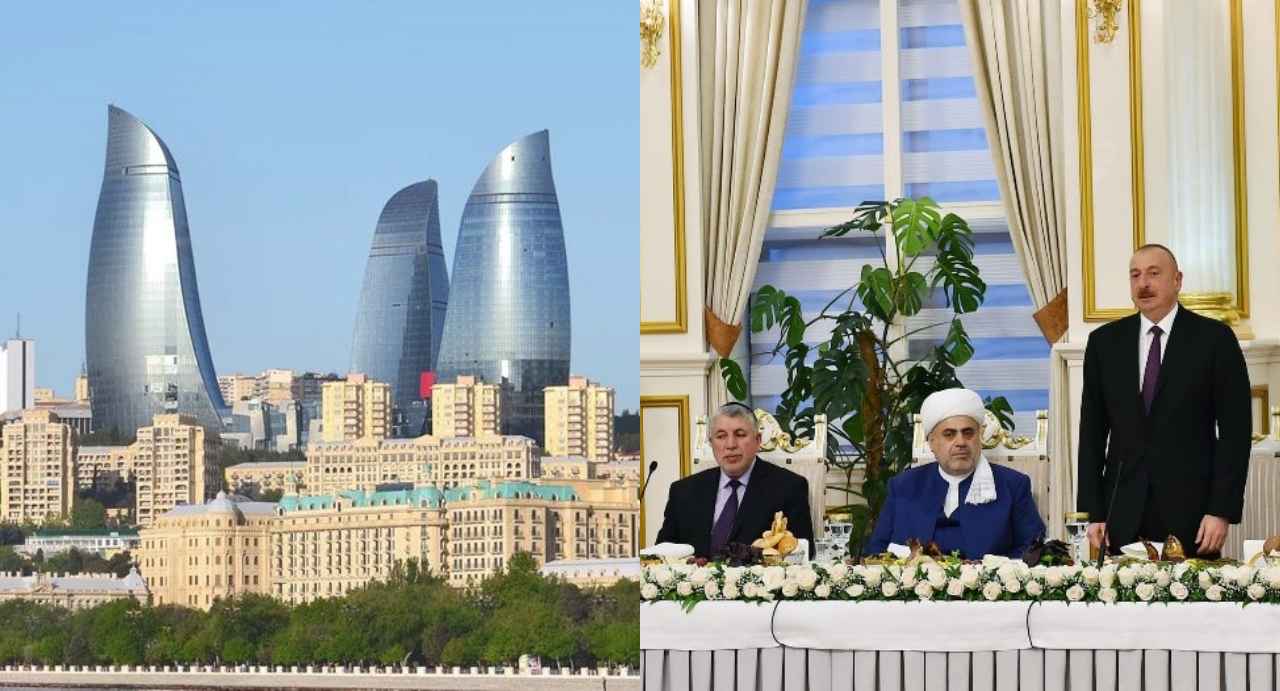 The Azerbaijan Democratic Republic proclaimed its independence in 1918 and became the first secular democratic Muslim-majority state in the eastern-Muslim world. In 1920, the country was occupied by the Army of Soviet Russia.

The modern Republic of Azerbaijan regained its independence after 71 years on 30 August 1991, shortly before the dissolution of the USSR in the same year.

One of Azerbaijan`s ancient settlement and culture centers, Nagorno-Karabakh is part of Karabakh region. In 1923, the Soviet government established the Nagorno-Karabakh Autonomous Oblast (NKAO), covering a total area of 4,400 км², in the mountainous part of Karabakh. This laid the foundation of separatist trends in that region. But in fact the root cause of the problem goes back to the 18th century when the Armenians, who were resettled in Azerbaijan, laid claims to Azerbaijani lands.

The Armenia-Azerbaijan Nagorno-Karabakh conflict started with the Armenians` open territorial claims to Azerbaijan`s historical lands and ethnic provocations in 1988. Thus Armenian armed forces have occupied the internationally recognized more than 20 percent of the Azerbaijani territory – Nagorno-Karabakh region and 7 surrounding districts.

A ceasefire signed in 1994 ceased the grave situation, albeit only temporarily. To this day, Armenian forces have been violating the ceasefire with Azerbaijan and making infrastructural changes in the occupied territories of Azerbaijan.

Over a million of Azerbaijanis in the occupied territories have been subjected to bloody ethnic cleansing by the brutal Armenian forces.

By the early 1990s, more than one million Azerbaijanis were expelled, becoming refugees and IDPs by Armenia, The UN Security Council adopted four resolutions – 822 (1993), 853 (1993), 874 (1993), and 884 (1993) recognizing the land as Azerbaijan’s, and demanding the complete withdrawal of Armenian armed forces from these territories of Azerbaijan. However, Armenia ignored these resolutions.

Along with abovementioned points they committed aggressive policy not only against the people due to their nationality, but also historical-cultural heritage of Azerbaijan.

Today there remain 403 historical and religious monuments in the occupied territories, including 67 mosques, 144 churches, and 192 sanctuaries. But, these religious edifices, which also hold cultural and historic importance, are under threat of being demolished or converted to other uses. Precedent highlights this risk.

Despite this conflict emerged in the aftermath of the Armenian occupation, the Armenian Saint Gregory Church in downtown Baku is fully refurbished and under State protection.

According to estimates, more than 96% of the population are Muslims. Most of the remaining 4% of the population are Orthodox, adherents of the Armenian Apostolic Church (mainly living in the occupied territories of Azerbaijan), Jews, adherents of various Protestant sects, Bahá’ís, Hare Krishnas, Catholics and others. As you can see, the biggest group after Muslims are Christians.

Azerbaijan people are known with their rich national-moral values, religious tolerance and traditions all across the world. Although our people have experienced various socio-political formations, they have preserved their moral values and approached them as the most precious wealth.

National-moral values play an important role in the formation of public opinion and ensuring civil solidarity. The people of Azerbaijan have preserved their national moral values and religious tolerance and been loyal to those values even in the most turbulent periods in history.

The National Leader pursued a purposeful policy aimed at ensuring that progressive religious values which are one of the components of national-moral values.

Highly appreciating the importance of religious values in the country, National leader Heydar Aliyev said: “There are a number of religions in the world and each of them has its own specific place. We, Azerbaijanis being proud of our religion-Islam, which have never displayed negative and unfriendly attitude, towards other religions, have never been at enmity and never obliged other nations to practice the religion of Islam”.

The establishment of the State Committee on the Religious Associations of the Republic of Azerbaijan by National leader Heydar Aliyev’s decree dated June 21, 2001, was aimed at regulating the state-religion relations, conducting enlightenment work in the sphere of religious beliefs, so forth. was an important event.

The work done in order to preserve traditions, especially the restoration of examples of Islamic culture – mosques, historical architectural monuments, shrines destroyed during the Soviet period is a clear proof of national leader’s commitment to national-moral values.

National leader Heydar Aliyev’s political course that contains progressive development of national-moral values is consistently and purposefully implemented by the President of Azerbaijan Republic Ilham Aliyev.  President Ilham Aliyev’s services in this area are an example of high level of care and attention to Azerbaijani culture, literature, folklore and art. The work done in this direction comes from the state policy aimed at promoting the idea of Azerbaijanism and national-moral values worldwide.

Considering the modernization of the country based on national-moral values, President Ilham Aliyev said: “Modernity, innovation, and commitment to national values, national roots in the meantime. This idea which reflects current Azerbaijan is very clear and known to everyone.

Azerbaijan people have always been people connected to their national roots, and our future success depends on these factors. We are building modern, strong, secular Azerbaijan based on our historical, rich cultural legacy”.

By the decree of President Ilham Aliyev, dated October 10, 2017, the Moral Values Promotion Fund was established under the State Committee on Religious Associations of the Republic of Azerbaijan in order to establish wide-ranged conditions for the activities of religious confessions, protect and develop moral values and attract government support to this area.

The tolerant environment, inter-religious dialogue in the country have created favorable conditions for the development of national-moral values and relations between state and religion.

The Republic of Azerbaijan contributes to the development and enrichment of Islamic culture, religious tolerance and moral values as an integral part of the Muslim world.  Religion of Islam, both as a religious belief and a national-moral value of the people is an integral part of people’s lives. Islam has a key role in the development of national values, the establishment of a strong and healthy foundation of the family.

While the entire world experiences great problems based on religious intolerance and conflicts, Azerbaijan can serve as best example of a community where each person shows respect to human-beings of different races and religions.

dialogue around the world. President Ilham Aliyev pursues a consistent policy to promote and advance this value.

Baku International Multiculturalism Centre was founded with the presidential decree dated May 15, 2014 taking into consideration the promotion of Azerbaijani multiculturalism all across the world, analysis of philosophical, social and political aspects of multicultural models of different countries in the reality of the country.

Azerbaijan has hosted prestigious international events, summits and international conferences in various spheres. The Baku International Humanitarian Forum, the World Forum for Intercultural Dialogue, the Global Forum of the UN Alliance of Civilizations, the Summit of World Religious Leaders also have special place in this series. Declaring 2016 as the “Year of Multiculturalism” and 2017 as the “Year of Islamic Solidarity” in Azerbaijan is the best indicator of country’s commitment to the progressive values ​​of Islam.

Also the First Vice President of the Republic of Azerbaijan, Goodwill Ambassador of UNESCO and ISESCO, President of Heydar Aliyev Foundation, Mrs. Mehriban Aliyev has been paying special attention to projects being implemented in Azerbaijan at the state level towards science, education and culture are of great importance in promoting our national-moral values ​​not only in Azerbaijan, but also around the world. Plenty of mosques, churches and other religious monuments were restored and put into operation with the support of Heydar Aliyev Foundation.

The abovementioned facts prove that the national-moral values of the people of Azerbaijan are developing on the basis of the principle of historical heritage and they have a special place in the enrichment of world culture. Protection and promotion of national and moral values are one of the main directions of Azerbaijan state policy. Azerbaijan’s contributions to Intercultural and interreligious dialogue is of great importance in the development of these values.

Chairman of the State Committee on Religious Associations of the Republic of Azerbaijan,