"Govt. Must Resign If They Don't Want Chaos In Pakistan" - JUI Chief

The stage is finally set, and the show is about to begin. No, not an opera or a tv show, we’re talking about Maulana Fazal-ul-Rehman and JUI-F’s Azadi March in Islamabad.

The Azadi March which began on 27 October from different cities of the country, is set to reach Islamabad today. JUI-F workers have already started establishing their set-up at D Chowk. 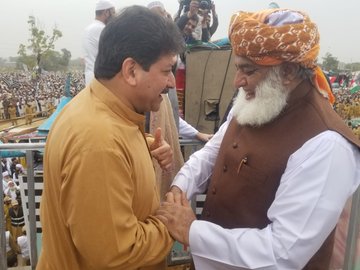 Additionally, Maulana Fazal-ul-Rehman’s latest statement against the government makes his agenda all the more clear. The JUI-F Chief is clearly warning the government. He says if they fail to step down in 2-3 days, things might get rogue.

‘Government responsible for what happens’

Furthermore, the JUI-F leader also did not oppose the idea of a sit-in (dharna) in Islamabad, similar to one that PTI held for 3 months.

“We will give the government two to three days to perceive the matter while sitting in Islamabad,” Maulana said to a private TV channel.

“There will be chaos in the country if the government doesn’t step down. We will not surrender until their resignation,” he further added.

The Azadi March mastermind did not just single out Islamabad but said that ‘chaos’ might spread throughout the whole country. It is pertinent to add here that the JUI-F has a huge following all over the country, especially in KPK and Balochistan.

Moreover, small factions from Awami National Party (ANP), PML-N and PPP have also joined Maulana’s army. The white and black striped caravan is set to take the Red Zone by storm as well.

As the Maulana puts it, chances of that happening cannot be ruled out as matters are ‘out of his hands’ now. He says that it’s up to the people if they want to go all the way to Constitution Avenue in the capital city.

Maulana Fazal-ul-Rehman’s motive of Azadi March, although very clear, are still mysterious. The JUI-F frontman had said the march was to dislodge the PTI government, but the steps remain unclear.

How does the Maulana plan on achieving it? Will there be a confrontation between the government and Maulana’s jiyalas?

Everyone seems to be talking about it, but nobody knows what will happen in the Azadi March. Islamabad was home to PTI’s dharna for 3 months, will JUI-F and its thousands of protestors bring tabdeeli? Only time will tell.

As of now, the government has deployed almost 10,000 security officials to counter any ruckus created by the JUI-F fraternity. District management, along with police and special forces, is ready to counter plans of bringing the government down.

Daraz Gyara Gyara: A World Of Discounts That You’d Absolutely Love!
Coke Studio Will Not Release Episode 3 Because Of Tezgam Incident!
To Top