In recent times, when Pakistan is reviving its lost credibility among other world countries, the opposition is not ready to accept it. Apparently, under Prime Minister Imran Khan’s honest leadership, the country is pacing towards progress and development, drastically. Well, in the midst of the ongoing “Azadi March” in Islamabad, PM Imran Khan has recently, decided to solve the issue through reconciliation.

PM Imran Khan to reconcile with the Azadi Marchers!

Initiated by the Jamiat Ulema e Islam (JUI F) leader Maulana Fazal ur Rehman, the anti-government protest is currently in full swing. Instead of worrying, Khan is ensuring proper assistance and relief for the Azadi Marchers. This week, during a meeting, PM Imran Khan has assured that the Azadi March issue will be solved through reconciliation, not strict measures. 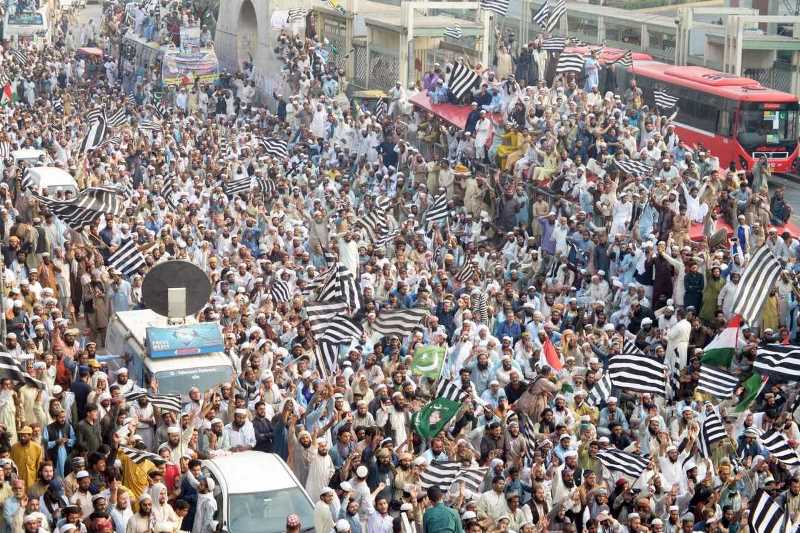 Earlier this week, PM Khan had a meeting with PTI parliamentarians to discuss the turmoil caused by the Azadi March. Currently, Pakistan is facing an extreme economic crisis, Maulana Diesel’s protest is raising the inflation bar much higher. Talking about the Azadi March dharna, the Premier shared the decision with his party workers, implementing a ‘no violence’ policy.

“The issue will be solved through reconciliation!”

Specifically, on the dharna going on in the Capital city, PM Imran Khan stated, “The issue (Azadi March) will be solved through reconciliation.” Opting for a reconciling strategy, it sure provides a meaningful message across the protesting parties. Apparently, the mere reason for the dharna is to make PM Khan step down from his seat reflecting upon his governing capabilities.

Apparently, it seems like Maulana Diesel’s Azadi March is about to end in failure as the PTI government knows the drill. Moreover, PM Imran Khan discussed the reasons behind the rising inflation in the country. Since Pakistan was already in a state of turmoil regarding its unstable economy, the Azadi March is making it more crucial.

Elaborating his clear stance further, the Premier said, “We will bring hoarders to the book. Pakistan is going through artificial inflation because of these hoarders.” Clearing his stance over the protesting atmosphere, PM Imran Khan had previously stated that no matter what happens, he will not resign because of Azadi March.

Not only the Azadi March issue but, the meeting comprised of several other aspects as well. Particularly, the revenue-generating metropolitan city of Pakistan, Karachi has always faced neglection in every government tenure. Picking up the leap, PM Imran Khan also criticized the Sindh government as the metropolis’ condition is getting worse with each passing day.

Calling out the provincial government, Khan maintained, “The Sindh government has completely failed. I will visit Karachi soon.” Moving ahead, the Premier then mentioned the passing of the Pakistan Medical Authority bill. Eventually, the PTI lawmakers were then directed to grab their parliament seats and stay within.

Money-making strategies of those associated with the Pakistan Medical Authority!

Lashing out at the people who just take up the doctorate degree to make money without caring for human lives. Furthermore, PM Imran Khan showed anger towards those who had started their own medical colleges while holding medical board seats. He added, “These people are playing with human lives. They should be dealt with strictness.”

While Maulana Diesel is seen presenting his demands, the Azadi Marchers have found a new way of passing their time. However, its a fact that whether the opposing alliance like it or not, eventually, they will have to face PM Imran Khan. Well, the chances of reaching a similar point seem impossible but PTI’s calm take on the matter is appreciable.