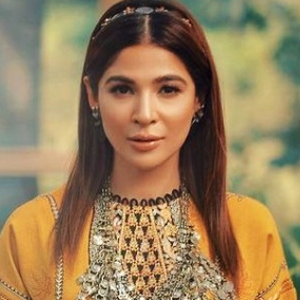 Ayesha Omar usually works in the Pakistani film industry and Television media. She started her career by hosting when she was only fifteen years old. But get fame through the well-known character ‘Khoobsurat’ in Bulbulay.

Also from Natasha in Ladies Park, Sara in Zindagi Gulzar Hai, Arzoo in Tanhai , and Aleena in Dil Apna Aur Preet Parai. She has proven herself as one of the most popular and commendable actresses of Pakistan. Now she is also among the highest-paid actress in the Pakistani television industry. She released her first single, “Chalte Chalte” and “Khamoshi” which, gain commercial success in Pakistan in 2012. Ayesha Omar went on even further and win Lux Style Award for Best Album. In 2015, she appeared in her film debut as the lead role with successful romantic-comedy Karachi Se Lahore.

Ayesha Omar made her acting debut with the serial College Jeans, which on-aired on PTV. After she appeared in the drama serial Dolly Ki Ayegi Baraat on Geo Tv. And earlier to this, she also performed in a few Reality shows Including “Meray Bachpan Kay Din, Rhythm, Yeh Waqt Hai Mera and Hot Chocolate.”

She gets her early education from Lahore grammar school, Pakistan and gets her graduation completed from the National College of Arts, Lahore. While in school, she took great interest in co-curricular activities and learned acting through performance in center plays.

Ayesha Omar was born in Lahore, Pakistan. She was about a year old when her father died, and her mother raised Ayesha Omar and her sibling as a single parent. She described her childhood as “intense” and “autonomous.” She went to Lahore Grammar School and then the National College of Arts to love art.

In 2009, she was seen on the well-known sitcom Bulbulay as Khoobsurat, with opposite on-screen actor Nabeel. Bulbulay becomes the most-watched comedy series in Pakistan. Succeeding the achievement of Bulbulay, Ayesha Omar got massive media attention and turned into a commonly recognized name. Omar then showed up in the PTV serial Dil Ko Manana Aya Nahi with the opposite co-star Amanat Ali. Further in Geo TV’s drama serial Ladies Park with  Humayun Saeed, Azfar Rehman, Hina Dilpazeer and Mahnoor Baloch. In 2012, she was seen in Hum TV’s profoundly successful romantic-drama serial Zindagi Gulzar Hai. She represented Sara, a young lady who carries the shades of a sibling relationship. In the same drama, she played the role of on-screen sister of Fawad Khan. In 2013, she played the significant challenging role called Arzoo in Tanhai on Hum TV. The show was an achievement of her career at that time.

After turning into a built-up mature actress of Pakistani TV, Ayesha Omar ventured into the film industry in the lead role with Wajahat Rauf’s street show film Karachi Se Lahore, in which she has made impeccable chemistry with Shehzad Sheik. After the release, the film got generally blended reviews from the audience that includes criticism as well. Her next movie which was released was Yalghaar in 2017. She played the serious character of Zarmina portrays her character as the lady of the hour who is taken from her wedding service by Tor Jan and his fear-based oppressors.

Even progressively smooth is Ayesha Omar’s motivation on the set. She plays the movie ‘Yalghaar,’ which is among the most costly Pakistani films. The expense also includes waterproof cosmetics, Ayesha Omar’s powder-colored face, combined with an unending course of glycerine tears, have clearly contributed to the cost that occurred.

In 2018, Ayesha Omar showed up in the film Saat Din Mohabbat that has Mahira khan and Sheheryar Munawar as main leads, which was released in June 2018. Talking about the movie in a press speech, Ayesha Omar commented:

The film was an achievement in the film industry.

In the beginning of 2019, she has shared the screen alongside Ahsan Khan in TV director Amin Iqbal’s introduction film Rehbra, which is said to be a lighthearted comedy. Moreover, she has likewise portrayed a supporting character in the movie Kaaf Kangana, directed by Khalil-ur-Rehman Qamar. She is now supposed to be seen in Karachi Se Lahore 3 with co-actor Yasir Hussain as per the source.

In 2012, Ayesha Omar released two of her collections, “Chalte” and “Khamoshi,” for which she won Lux Style Awards for Best Album, and in 2013 she released her third collection, “Gimme.” In 2013, she gave her voice for an old-style tune named “Laage Re Nain” and another blend tune “Miyan Ki Malhar” for Coke Studio Pakistan (Season 6).