The political drama continues in the aftermath of Panama verdict in Pakistan. As if the bygone week was not overwhelming, the latest updates in the political scenario are enough to raise many concerns. After Naz Baloch, another member of Pakistan Tehreek-e-Insaan (PTI) part ways with the party. MNA Ayesha Gulalai departs from the party after announcing her imminent decision during a press conference yesterday. 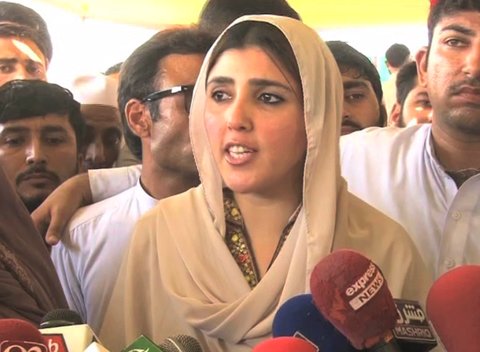 This is what she said during her press conference:

“We are respectful Pashtuns. Our dignities are under a threat as long as we are in PTI. Mr. Imran Khan just cannot control himself. It was October of 2013 when I started receiving ‘lewd’ text messages from him; you can check his BlackBerry smartphone. What those texts said cannot be tolerated by any individual who has a shred of self-respect in them. I have all the records of his text messages.”

To support her claim further, she tweeted this:

Here is the clip of Ayesha Gulalai’s press conference:

Her press conference took a toll on the social media – here are the imminent reactions:

Another educated woman exits the PTI. MNA Ayesha Gulalai's rebuke adds to the disquiet about a woman's place in the party. Not good https://t.co/2jJiIraLtV

I will do press conference & expose "number 2" people in #PTI, they are morally corrupt, have no respect for Women: #PTI MNA Ayesha Gulalai

1st @MalaikaSRaza then @NazBaloch_ now #AyeshaGulalai. PTI must reflect why those who stood with the Party when all doubted it are leaving

I think Imran khan is responsible for all this , He was the one who put her on comfortable chair instead Fozia Qasuri, #AyeshaGulalai

Women are strength of Pakistan. PTI can't bring any change until they give due representation & respect to the women. #AyeshaGulalai

Shameless character assassination of #AyeshaGulalai and her sister. #PTI is proving to be a cult that punishes those who leave it.

@ImranKhanPTI should NOT respond at all to #AyeshaGulalai allegations. Not even mention her. He has bigger things to handle.

What a TALENT ? CHEAP PUBLICITY ???

#AyeshaGulalai wants ppl to imagine the text mesgs sent to her.Why not go to the Police or the courts? 15 mins of fame seeker.

I'm not a PTI supporter, but whatever #AyeshaGulalai said is totally disgusting.
Cheap publicity isn't going to protect her from falling.

And why is #AyeshaGulalai repeatedly saying "Nawaz Sharif khandani aadmi hai"? What is the context here? What is actually happening ppl?

Whether her allegations stand to any truth or not, PTI and Imran Khan have a grave problem to deal with. We shall see how they would react to it and see it past. Not ruling out the credibility of Ayesha Gulalai over her claim; it could be true and it could be not either. What do you guys think about it? Share your opinions.

Ahmed Ali Butt had the Perfect Reply for Hamza Ali Abbasi Calling Him an ‘Item Boy’
Singer-turned-Politician Jawad Ahmad’s take on the Ayesha Gulalai and Imran Khan Fiasco is Extreme!
To Top