Autism spectrum disorder is a genetic disorder caused due to mutations that are inherited by the offspring’s parents. However, many treatments and cures are found for this disorder, a young Dubai-based Pakistani hero of hope is surely winning our hearts while he practices to run 100 kilometers. The purpose of this 100-km sprint is to raise awareness about children with special needs.

The mother of this beautiful young soul mentioned that she wants her child to run a 100 miles so that they both can raise awareness about the disorder and also about special needs in sports for children with special issues/disorders.

The young boy’s mother, Qurat-ul-ain Jawwed, also brought into focus that she shared her plan on a social media platform. Upon getting positive comments and encouragement, she decided to go with it.

She adds, “Suleman is six, he is autistic and non-conversational. He also has Attention Deficit Hyperactivity Disorder (ADHD). During the recent lockdown, this activity was not possible for him and it affected him a lot.”

She mentions that her little autistic boy loved to run, however, during lockdown due to COVID-19, he was unable to do so. This also made him even more irritated and non-communicative.

Hence, once the lockdown was lifted, he felt great and used to run daily. His enthusiasm for running is what gave his mother an idea about her son, Suleman Jawwed.

The Heroes of Hope

The Heroes of Hope is a non-profit organization that operates on developing different activities and sports programs for children that are facing disorders or have special needs. The founder of this program is Hollie Murphy. Amazingly, even young Suleman is a part of this program.

“Hollie thought it was a great idea and it would also motivate other parents. That’s when I asked other community members also to accompany Suleman,” said the autistic boy’s mother. 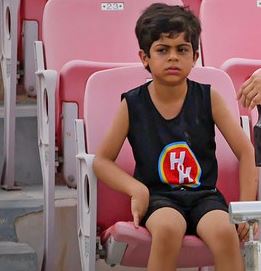 What we find even more inspiring is that this young boy has managed to run about 50 kilometers as of yet. It won’t be long when he finally manages to run an entire 100 kilometers.

Hollie Murphy when asked spoke on the matter and her ideology will truly astound you, “We embrace all of them for who they are. In fact, we don’t see children for their autism or Down’s Syndrome; we just see them as our athletes”.

Mental health or psychological issues aren’t given much consideration in Pakistan. It is truly refreshing to see how quickly things are about to change and the mentality is finally evolving in a positive direction.

To see young Suleman run and fulfill his little dream is truly beguiling. We can’t wait for him to finally complete the 100 kilometers sprint. To say we are proud of him is an understatement and we wish him the best of luck!

Mufti Muneeb Appeals Govt To Declare Third Day Of Eid As A Holiday
Cow Wash! Pakistanis Scrubbing Their Animals At Car Cleaners Before Eid
To Top