"They Broke The Door, Cut Our Hair And Harassed Us" - Horrific Incident Of Gang Rape In Karachi

The birth of an intersex child is considered as an act of shame and is immediately handed over to some intersex/transgender community to save themselves from the embarrassment which results in a lifetime of both inequality and brutality for the Transchild. The amount of rights and respect which is given to the Trans-genders community is no secret, after all these years the community just now got a CNIC and a passport having their gender which for sure is the only milestone. It is sad that a creation of God is a disgrace for us to such an extent that some don’t even count them as a part of our society. Recently, a Transgender named Chanda Sharmeeli was killed in Karachi while a group of Transgender people was traveling in 4WD vehicle where passengers firstly threw rotten eggs at the group and then opened fire.

CHILLS DOWN THE SPINE 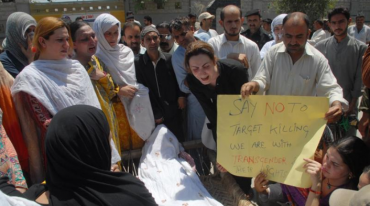 But that is not it as the journey of barbarism for them have always continued for ages. Before we could even digest the incident of a Trans being killed, we heard about another incident that is now making headlines. It is known to all of us that Trans are often considered as an object for seeking pleasure but now they were even attacked for not allowing some group of people to spend time with them. Nonetheless it resulted it the group breaking their door and humiliating them by cutting their hair, sexually abusing them, taking their stuff and what not. If you are astonished to read all of it then they have a look at this video.

FIR of this incident is still in progress, and people are giving a strong reaction over this which denotes that finally we have started to accept them as humans along with that we all as a nation stand against such behavior.

STAND FOR THEIR RIGHTS

THE AGGRESSION IN PEOPLE

Let us know in the comment section down below as to what’s your take on it, and don’t forget to  share it because we have to stand for their rights.

Karachi: Sacrificial Camel Tied Up in a Temple Irks Hindus
Stop Everything and See Badnaam’s Crazy Performance That Received a Standing Ovation in Pepsi Battle of the Bands!
To Top