This Empowering Pakistani Mother Works With Mechanics & Rides A Motorcycle

From an individual perspective, a dependency is an immense feebleness of every human being. However, independence has soulful prosperity for doing anything with inherent potential.

Usually, in Pakistan, women sit at the back of a motorcycle, behind a male member of the family. While sitting at the back, they often hold a child or two in their laps while their flowing dupattas risk getting stuck in the wheels of the motorcycle. This is also a common cause of accidents. The above scenario illustrates that dependency on man is the only way to survive for women in our society. However, a woman in Sheikhupura has challenged this stereotype.

The inspirational life journey of Asma

Asma said that she got married at the age of thirteen. On the other hand, her husband was forty-eight years old. In four years of marriage, they had two children. Their financial conditions were never good. She left home and started working so that she could earn some money. However, she was later divorced by her husband after accusing her of having an affair with another man.

Then Asma started to work with mechanics for a living. She also learned to ride a bicycle. Soon she collected ten thousand and bought a motorbike on which she goes to work as a laborer and drop her children off at school. Her elder son is in class 6th while her younger daughter is in class 4th. Asma says that when she picks up bricks as labor during work and carry them to the top of the roof, the men who work with her also get surprised.

Even though it seems like a simple topic to write on but considering how difficult it is for women in Pakistan to drive bikes, women like Asma need to be appreciated.

Initiatives for women empowerment in Pakistan

There have been various initiatives in Pakistan for the empowerment and financial inclusion of women. In January 2020, Careem announced the introduction of a new vehicle category on their app named Women on Wheels (WoW). 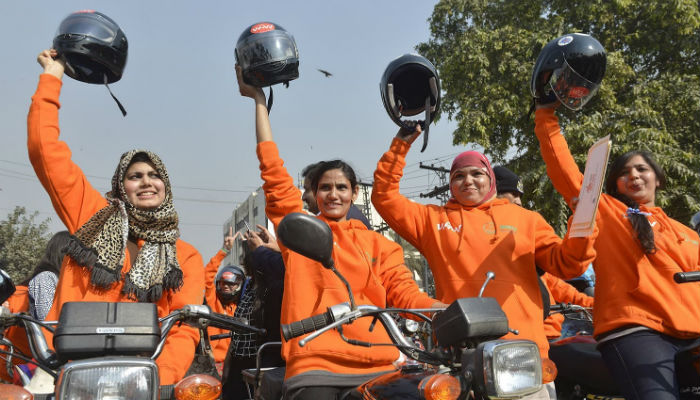 In this initiative, both captains and customers on a bike ride will be female. The main objective of this initiative is to empower women to reclaim public spaces and become financially independent.

What do you think of this story? Let us know in the comment section below!