Singer-turned actor Asim Azhar buys his mother’s dream car for her. The singer shares a picture of himself posing with the new car. He writes, “My mother always wanted this car. Today I got it MashaAllah. Alhamdulillah.”

He posted another, separate social media post which included pictures of his family with the car. Asim Azhar bought a Toyota Fortunate for his mother and shared his happiness with his followers.

The singer recently shared his version of the Bollywood song ‘Humraah’. This song was removed from the Bollywood movie ‘Malang’ due to the tension between India and Pakistan. He began his career with renditions of various Western songs and went on to compose his very own music. 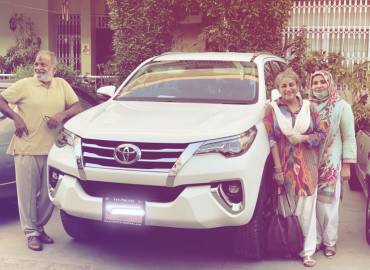 Asim Azhar has become one of the most successful singers in Pakistan. With all the fame and success the singer has achieved till now, he recently bought his mother her dream SUV.

The trollers really need to take it a notch down!

Despite his brilliant act of kindness, the singer is getting severely trolled on the Internet. All he did was buy his mother a car of her dreams. Isn’t this similar to what we all do for our loved ones out of love?

Why do people have the need to ruin the happiness of other people? Sure, it might be just another car for some people. It is, however, not the case for everyone. All he wanted was to share his happiness with his fans. What did he get in return? 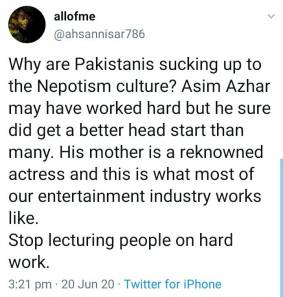 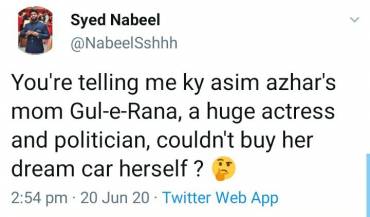 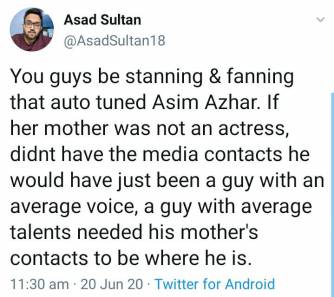 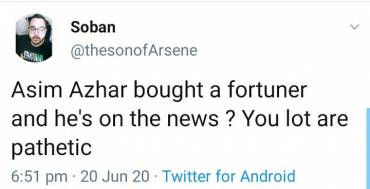 As a society, we have simply lost the ability to be happy for others. People have become so intolerant and dismissive that they could not care any less about hurting other people’s feelings. Trolling someone for fulfilling his mother’s dream is downright sadistic.

Asim Azhar’s mother is a veteran actress, Gul-e-Rana. She played a significant role in helping her son to become what he is today. The grateful son obviously does not miss any opportunity to embrace his mother- so much so that he bought her an SUV.

My mother always wanted this car. Today I got it MashaAllah. Alhamdulillah 🙏🏽♥️😊 pic.twitter.com/1t3BTkJqIj

Why is he getting so much hate? Are people that heartless that they cannot see how hard the man worked to turn his mother’s dream into reality.

Needless to say, we all enjoy memes and all the trolling on the Internet. But let’s face it- we need to set some boundaries. What did the guy even do to deserve all this backlash? And how can we forget the shoe-attack during his live concert last year!

The young singer who recently sang Bewafa also received a dozen of congratulations from many fans and celebrities. Thank God, there is still some decency and humanity left in the world.

The excitement and happiness he shared with his fans is simply awe-inspiring! He deserved so much better than what he received. We wholeheartedly wish Asim Azhar well for his future endeavors!

Here Are The Do’s & Don’ts Of The Dangerous ‘Ring Of Fire’ Solar Eclipse Tomorrow!
Sushant Singh’s Girlfriend Rhea Chakraborty Might Be The Biggest Reason Of His Death
To Top