The harassment against some female journalists has shaken Pakistan in one whole day. From petitions being signed to responses on the stance, the whole public is intrigued to learn regarding the outcome of the situation. Famous, top-notch journalists include Gharida Farooqui, Asma Shirazi, Nasim Zehra, and many more. However, the story did take another vicious turn, as Federal Minister for Planning Asad Umar shared his views on the matter of harassment with these female journalists!

Things spiraled completely out of control right after the petition was signed against some government officials who were harassing these female journalists online.

Although his statement by Asad Umar creates a more neutral zone and focuses on the imperative of how both males and females should not be treated any differently regardless of their occupation or gender, it also sheds light on the role of ethical and authentic journalism. If one looks at it from a completely different point of view.

Asad Umar said in response to the journalists that anyone who uses abusive language or is involved in an act of harassment regardless of their role or gender must not be treated any differently. In fact, they both are wrong. Which stands correct. Shouldn’t that be what we all must focus on? However, maybe people didn’t understand his stance or statement in a clearer light and have started to call him out on the matter.

There’s no equivalence here. Men aren’t targeted for their gender. A ruling party with a vast social media army is far more powerful – and dangerous – than individual journalists doing their job.

From Omar Waraich to Marvi Sarmad everyone started to question his stance and statement.

Sarmad, like always, knew how to make the story controversial and questionable for well, everyone. What is angering people regarding his tweet is how it seems that he might be openly accusing these journalists for being misleading and spreading fake news. In another context, it makes his statement not only controversial rather even as if its blaming the victims also.

You Mr Umar, are the king of false equivalences. Sometimes I wonder why weren't you ever taught to actually use your mind? Do you really think all of the "facts" youentioned are equivalent and comparable?

Aha, classic tactic to seemingly condemnn something but also turning it into a list and adding other issues to it, implicitly providing a justification for the original offense. Like harassment of journalists can't be condemned on its own without considering your oth grievances

Asad on a serious note I wish you could walk your talk. Your Insafi trollers use most filthy & obscene language not only against Non-Pro PTI anchors & politicians but also against those PTI leaders who leave or made to leave the party. Uzma Karzar, Fouzia Qusoori, etc r examples

From criticizing him for being one of the bullies, it is a tad bit amusing as to how people are calling him out. The point he makes in his tweet is very concise, to the point, and clear.

He isn’t pointing fingers, however, he does puts in focus, that perhaps, fake news makers can’t hide under the umbrella of harassment after being called out for spreading fake news. 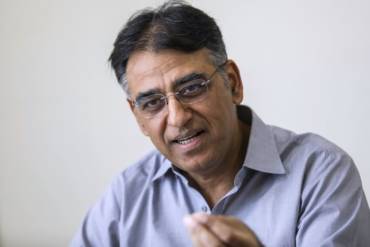 Harassment is not a joke

It is important to understand every angle, the one of Asad Umar and the other of the journalists on harassment, before standing against or in favor of something. Hence, why is it that people are only looking at this harassment case objectively? Is it weird that most of the journalists that are involved in this petition are pro-opposition, rather than the government?

Could there be more to the story than what is being led on? Perhaps, it is time that citizens before picking sides or coming to a more distinct outcome focus on all the aspects of the situation.

Now don’t get us wrong! We aren’t saying that the government is all roses and cherries. But the need of looking at the situation with a more convenient and neutral perspective is of due importance, before deciding over the pros and cons of it.