Minister for Planning, Development and Special Initiatives Asad Umar on Thursday assured that fighting coronavirus in Balochistan was a priority of the government.

The minister made the statement while briefing a meeting of digital media representatives in Islamabad. Several digital media journalists, including the team Parhlo.com from Karachi and Balochistan, also joined the discussion via video links. 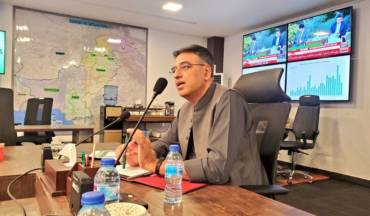 Source: TwitterWhen one of the digital journalists asked about the COVID-19 testing policy and pace of the government, Umar said, “Pakistan has the highest percentage of taking tests in South Asia so far and the government is increasing the testing facilities across the country.”

The Ehsaas Program and Balochistan

Talking about the Ehsaas Emergency Cash Programme, the federal minister said the program had done a remarkable job, and the government had figures to prove that.

Umar explained how the program distributed millions of rupees among the indigents on war-footings. However, he mentioned there was an extreme bottleneck in implementing the program in full swing as 76% of the labor force is undocumented.

Prime Minister Imran Khan’s Ehsaas Program, in particular, was aimed at helping the poor and the daily wagers in the country who were affected by lockdown. However, a huge number of laborers in Pakistan are undocumented.

In reply to a question by Parhlo.com with regards to the mechanism the government had in supplying goods and money to those undocumented laborers, the minister said, “The National Database and Registration Authority (NADRA) has a thorough data, which is helping the government in taking care of them.”

The minister also discussed how the provincial governments, particularly Sindh and Balochistan, performed while dealing with the pandemic in their respective provinces.

“Around 1,90,000 families have been benefited from the Ehssas program in Balochistan. The government is also working to embellish the condition of the hospital in the province”, said Umar.

Umar also faced questions regarding the plan agreed between the government and the ulema on congregational prayers during Ramadan.

“The meeting which agreed on a 20-point agenda on congregational prayers and mosques was headed by the president. Ulemas are an integral part of society and their input in the affairs of the state matters. But I’ll admit that there’s still a difference of opinion over the matter,” he said in reply to a question over it from the team Parhlo.com.

Another digital journalist raised the matter of political mudslinging on social media platforms when the country was facing coronavirus and asked the minister his point of view. 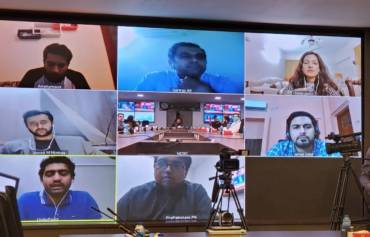 “Center and provincial governments are working together in this fight. I have just talked to Sindh CM about an issue on which he was asking about my opinion. This the level of collaboration between us,” said Umar.

“No politics should be done on the issue of coronavirus.”

According to Umar, the coming three weeks are crucial for the country. “Coronavirus is a contagious disease and nothing can be said with certainty that we will be out of this.”

“The month of Ramadan will be decisive and the government is fully prepared,” he added.

Regarding the Chinese pharmaceutical company that recently invited the National Institute of Health (NIH) Islamabad, to collaborate in conducting clinical, the minister said, “There is no approved vaccine as of yet.”

He said, “The private sector has been badly affected by the lockdown and the government is observant of that.”
Umar urged people to practice social distancing and adhere to the guidelines of the government.

“If people will not follow the instructions it is quite possible that on the Eid, the government may impose a stricter lockdown,” warned the minister.

The meeting was organized and attended by Dr. Arsalan Khalid, the Focal Person of Prime Minister Imran Khan on Social Media along with other stakeholders.