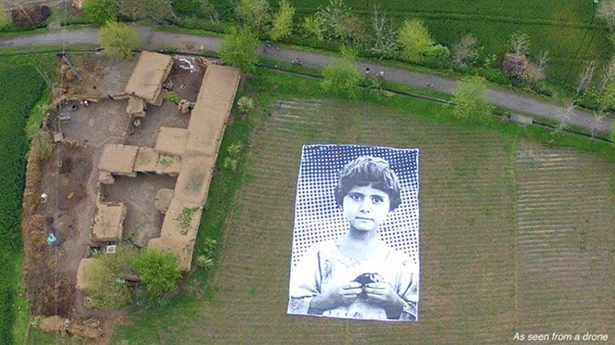 An artists collective has unfurled a massive poster showing a childâ€™s face in a heavily bombed area of Pakistan in the hopes that it will give pause to drone operators searching the area for kills.

According to #notabugsplat, named after the description given to kills on the ground when viewed through grainy video footage, the artists â€“ with help of villagers â€“ unfurled the giant poster in a field in the Khyber Pukhtoonkhwa region of Pakistan.

The hope is that it will increase awareness of drone operators of human cost, or â€˜collateral damageâ€™, when drones are used to attack targets on the ground.

The massive poster is also large enough to be captured by satellites collecting landscapes for online mapping sites.

#notabugssplat claims the installation was done with the help of artists associated with French artist JRâ€™s â€˜Inside Outâ€™ movement.

According to the Foundation for Fundamental Rights, the nameless child featured in the poster lost both her parents and two young siblings in a drone attack.