A video posted by a girl Zoobia Meer surfaced on the Internet last night left us all speechless. She recorded her brother, named Arsalan Meer, in a shameless act of brutally beating his mother. Social media users all over Pakistan erupted in anger and demanded justice for Zoobia Meer.

We could see his wife encouraging him to torture and ruthlessly hit his helpless mother in the video. Apart from this, the lack of mercy showcased in the viral video deeply shocked the entire nation.

Pakistani netizens are extremely enraged over the incident. Not only this but they also demand the unleashed monster to face the worst consequences of his actions. The entire nation has been devasted ever since the video surfaced on social media platforms.

Initially, the police had arrested the culprit. However, on offering a bribe to the greedy police officials, they set him free. Zobia Meer appealed to the entire nation, whoever came across the video, for justice for her helpless mother.

In addition, Rawalpindi Police ensured that a case has been registered against Arsalan and his wife for beating the mother, and Zobia. They also ensured that action will be taken and the accused will be brought to justice according to the law. 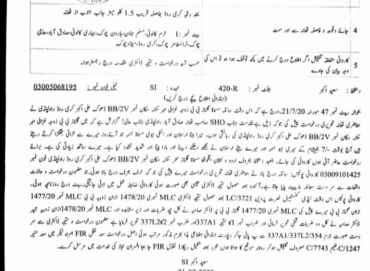 Fortunately, Rawalpindi police have finally arrested the accused. Additionally, the Superintendent of Police Atif Nazir has taken to his Twitter to share the good news.

Rawalpindi Police arrested the accused who tortured his mother in a video clip pic.twitter.com/Bv6n4V4Lr2

What a pity! He confesses to his heinous and inhuman act of beating his mother. According to the video, he claims that his mother was giving his wife a hard time. Moreover, he adds that there were some issues going on in the family which ‘burdened’ him, and ‘pressurized’ him.

In addition to this, the man who is abhorred by the entire nation seeks forgiveness from his mother. He also apologizes to all the mothers in Pakistan.

Twitteratis demand to make an example out of him!

Arsalan, the animal who was beating his mother in a video has been arrested. Keep this monster behind the bars for the rest of his life and make an example for others not to even think about raising their hand on their parents.@PunjabPoliceCPO #SpeakForDomesticViolence pic.twitter.com/v4agcEJDxL

Power of social media. Arsalan meer the man doing rounds on social media for beating his mother
Has been arrested 🖤 pic.twitter.com/GqdSAzKU9T

Arsalan Meer personally confessed his heinous crime. Punish him and make him an example for all other bullshit people who disrespect and torture their parents just for property #zoobiameer #HangArsalan pic.twitter.com/ppQkZD86JD

Arsalan Meer, the man doing rounds on social media for beating his mother has been arrested.
His arrest is not enough, He has to be gone through proper trial and should be sentenced.#ZoobiaMeer pic.twitter.com/dNul44sZcJ

Punjab Police said on Twitter Arsalan was included in the investigation after being granted interim bail.

How can anything at all even justify what he did? Nothing in the world, nothing, can ever justify hitting your mother. Whatever he and his wife did is purely sadistic. Hence, imprisoning him is not sufficient enough punishment for his monstrous act.

WATCH: A Missing Saudi Man Found Dead While He Was In The Praying Position Of ‘Sujood’
Ushna Shah – Why Controversies Surround Artists
To Top