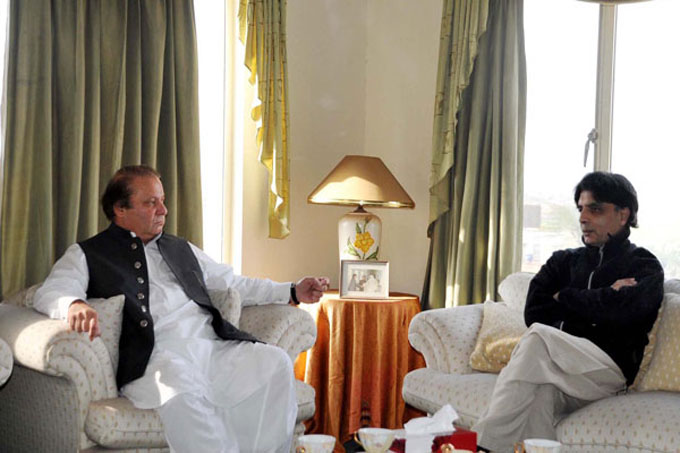 In the meeting which has been ongoing for four hours, Nawaz has assured Nisar that all grievances and issues will be resolved.

The interior minister told Nawaz that he has no personal grievances with him and that under all circumstances they should work for the government and party interest.

â€œParty matters should be resolved within the party,â€ the premier said.

Punjab Chief Minister Shahbaz Sharif was also present during the meeting. He has been tasked by Nawaz to meet with all ministers who have any grievances to resolve them.

The next meeting for this will take place at the Prime Minister House in Islamabad.

Earlier today, Nisar and Shahbaz reached Raiwind via helicopter to meet the premier.

Shahbaz had brought Nisar to Lahore on July 4. The move had come after a meeting of Pakistan Muslim League-Nawaz (PML-N) leaders over Nisarâ€™s growing sense of estrangement.

The PML-N leaders had met under the chairmanship of Nawaz in Islamabad yesterday and were briefed by Shahbaz about the interior ministerâ€™s grievances with the party and other issues, particularly the case of former president Pervez Musharraf.

Party sources had earlier said that Nisar will ask the prime minister for a solution to tackle the August 14 long march announced by Pakistan Tehreek-e-Insaf and Dr Tahirul Qadriâ€™s planned â€˜revolutionâ€™.
Sources had said the interior minister will also advise Nawaz to review the partyâ€™s policy on Musharraf during todayâ€™s meeting.

According to sources, Nisar is annoyed with certain cliques within the party and the premierâ€™s decision to give Defence and Energy Minister Khawaja Asifâ€™s opinion on the Musharraf issue precedence over his suggestion.

According to reports, three informal powerhouses have emerged within the PML-N and the stalwarts leading these groups have started lobbying within the party to remove each other from important portfolios or deflate their influence.

The three groups are led by Nisar, Asif and Finance Minister Ishaq Dar.

Party officials have revealed that Nisar is the most influential of the three group leaders or has the â€˜strongestâ€™ group as he is the closest to Shahbaz Sharif.

On the other hand, Asifâ€™s group, which includes Railways Minister Khawaja Saad Rafique, is known to be under Nawazâ€™s wing.

Although both Nisar and Asif have strongly opposed each otherâ€™s proposals whenever they were presented before the party leadership, they are both united in their opposition towards Dar, who they think uses â€“ rather, abuses â€“ the extra powers he has been given by the prime minister.

Article 245 to be invoked: Army to aid civil powers in major cities
F-35 fleet grounded for the eighth time over unknown engine issue
To Top