AR Rahman Just Shut Up All The Indians Who Judged His ‘Niqaabi’ Daughter And Wow, What A Dad! 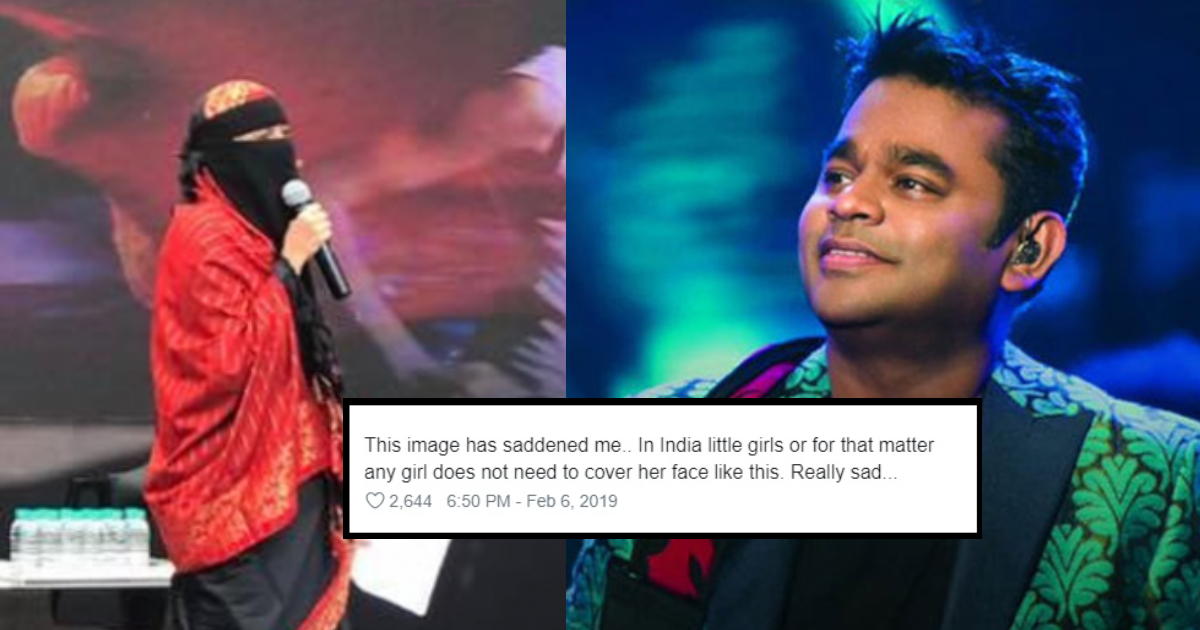 AR Rahman is a name that is not unheard of if you are a fan of Hindi music. He undoubtedly is one of the finest music composers, singers the Indian subcontinent might ever produce. But even he was a victim of the wrath of social media warriors who were too quick to judge when they saw his daughter in a niqaab on stage at an event. The event marked his 10 year anniversary of Oscar-winning for Slumdog Millionaire.

Social media was too quick to judge.

If a woman covers her head or even her face, why does it necessarily mean that she has been forced to do so and she is oppressed? But Indians were not really able to understand that fact and criticized AR Rahman and her daughter for her attire.

This image has saddened me.. In India little girls or for that matter any girl does not need to cover her face like this. Really sad… pic.twitter.com/ni7veXeAkT

Some were sensible and decided to come forward.

If people in South India can wear a lungi and go to work, AR Rahman’s daughter, Khatija has every right to wear niqaab if she wants to. The criticism seemed pretty unfair to the father and daughter because everyone can dress exactly how they want.

This is where India’s greatness liesIt is a free secular country where every citizen has a choice.Yogi Adityanath can wear saffron and perform his chief minsterial duties. A Muslim lady can wear a burqa. We from the South can wear a veshti (not Lungi)and go to office

But AR Rahman had a fitting reply to the trolls.

The maestro posted a photo of all the women in his family posing with Nita Ambani and he used the hashtag “freedomtochoose”. Yes, Mr. Rahman, everyone has all the freedom to choose whatever they want to wear, however, they want to dress and nobody has any right to judge them.

AR Rahman’s reply was a shut up call to all the trolls in the most perfect way!

The picture he posted shows his wife with a dupatta on her head, his daughter Khatija wearing a veil and the other daughter not doing either. The picture was enough as a reply to everyone who felt sad about Khatija’s naqaab assuming that she was “oppressed” or forced to cover her face. It really was her own choice and wasn’t compelled by anyone under any circumstances.

This picture sums up Muslim women of India

AR Rahman’s wife, Sairaa covers her head with a dupatta
His elder daughter, Khatija wears niqaab,
and other daughter, Raheema does not do either. #DoNotStereotype#FreedomToChoose https://t.co/tlVjgEvXla

Even Khatija decided not to stay silent.

She made a post on her Facebook regarding this situation and cleared it out that naqaab is her own personal choice and has nothing to do with her parents. She further said that everyone has a choice to wear whatever they want and asked to refrain from judgments without understand the situation.

The recent conversation of myself on stage with my dad has been doing the rounds. Although, I didn’t expect such an…

AR Rahman and his daughter really responded to the situation in the most effective way. Way to go Khatija!

The Rapping Pakistani ‘Deadpool’ Just Hit The Streets Of Lahore And The Awaam Is Going Crazy For Him!
Who Knows What The Future Holds? Red Bull Futur/Io Invites Creative Minds From Around The Globe To Share Their Desirable Futures
To Top