Hajj is one of the five pillars of Islam. It lays, utmost significance in Islam. Muslims from across the world perform the holy ritual every year in the month of Dhuʻl-Hijjah (the month of the pilgrimage). However, owing to financial or other issues several people despite the significant desire to perform hajj, cannot perform it.

Moreover, many find it difficult to know about the places to visit, the rules, and the steps of hajj. There is an application, Labbaik VR which can help those people. The app virtually makes one perform the hajj and knows about the surroundings.

Sadly, this year hajj is not open for all. Those who truly desire to visit the Holy Kaaba can install the app and see the virtual site of Kaaba and all other sites.

The application is can virtually take one to  Safa Marwa; it can show one how to perform Tawaf and Jamarat.

Here is what they say about the application on their official website.

“Labbaik VR is the world’s first fully developed, state-of-the-art, 3D Virtual Reality hajj and Umrah Simulator. Hajj is the definitive journey that every Muslim pilgrim yearns to undertake. Yet, many pilgrims are confused about the correct way to perform the sacred rituals, as well as knowing the locations of the holy landmarks.”

Current hajj training programs are ineffective, as they fail to provide a visual representation of the holy locations and the hajj rituals to the trainee.

“Labbaik VR is a one-stop workshop that trains hajj and Umrah pilgrims how to perform the complete set of hajj rituals in a Realistic 3D version of the holy locations in Makkah. This enables quicker, easier learning and enhanced retention of the information taught to the pilgrims.”

According to details on the website, “Labbaik VR is a highly useful tool that governments of Muslim countries can use to provide quality hajj training. Projected on a large immersive display screen, Labbaik VR is ideal for training large groups of pilgrims and cutting on training time.” 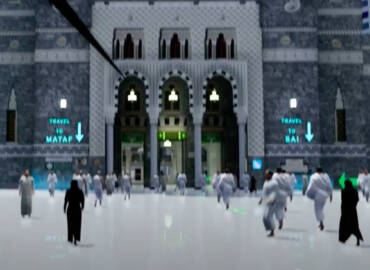 “Parents can use Labbaik VR to teach hajj rituals and duas to their children in an interesting and engaging manner. It also features a series of hands-on video tutorials for performing hajj, which can be learnt easily with the aid of the OCULUS device. Trainers can even upload their own tutorials on Labbaik VR to cater to all sects and races.

It features the Holy Kaaba precincts, the Arafat grounds, Muzdalifah, Jamarat, and other holy locations.” said the website.

As hajj is not allowed for foreign pilgrims this year due to the coronavirus pandemic. This application can take many to perform a virtual hajj. Moreover, it can also help one in learning certain mandatory ‘duas’ for hajj. Hence, one can get most of this app.