I Contacted This Indian Girl For A College Project, Didn't Know She Will Leave Us So Soon 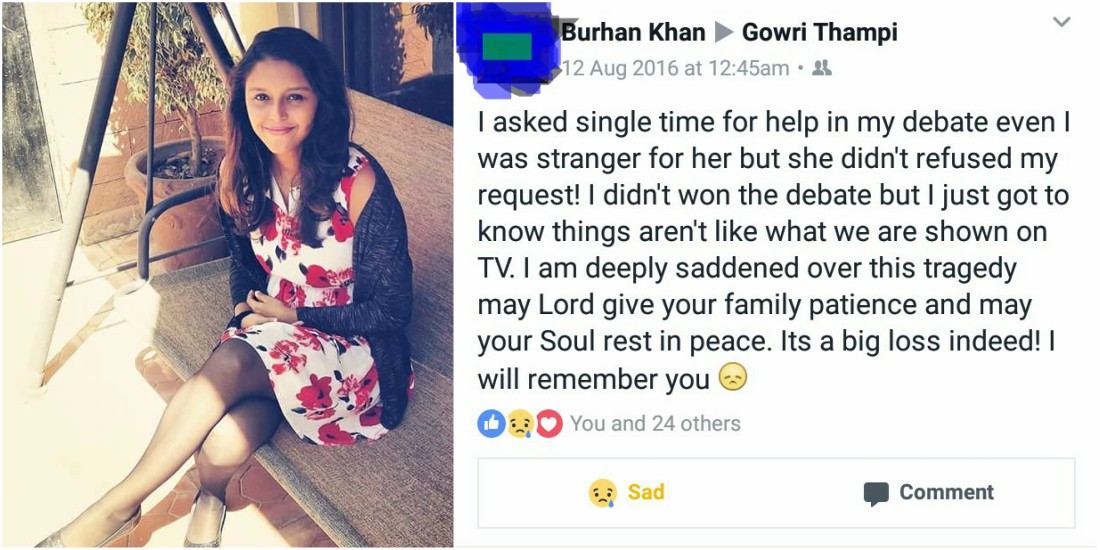 My name is Muhammad Burhan Khan and I live in Sialkot, Pakistan. I am a student of Computer Science and currently, I am completing my master’s degree from University of Management and Technology, Sialkot.

Actually, these were the days of June and we were about to have an activity in our University arranged by Model United Nations (MUN). I had participated in different discussions but the topics were to be finalized a day before. One of the topics to be discussed was “Aman Ki Asha” (Hope of Peace). Since Pakistan vs India is already quite a famous topic, it wasn’t difficult for me to prepare it but, it occurred to me; why not ask the same question from an Indian?

Because I was curious to know what an ordinary Indian would think about ‘Aman’ between Pakistan and India. Of course, we are and were each other’s rivals. I started my search on Facebook. After few hours of searching and messaging to few Indians, I got a reply from ‘Gowri’ who lived in Chennai. She didn’t ask me much but she was willing to help me. After few hours I messaged her if she is fine to start a conversation and she replied positively. 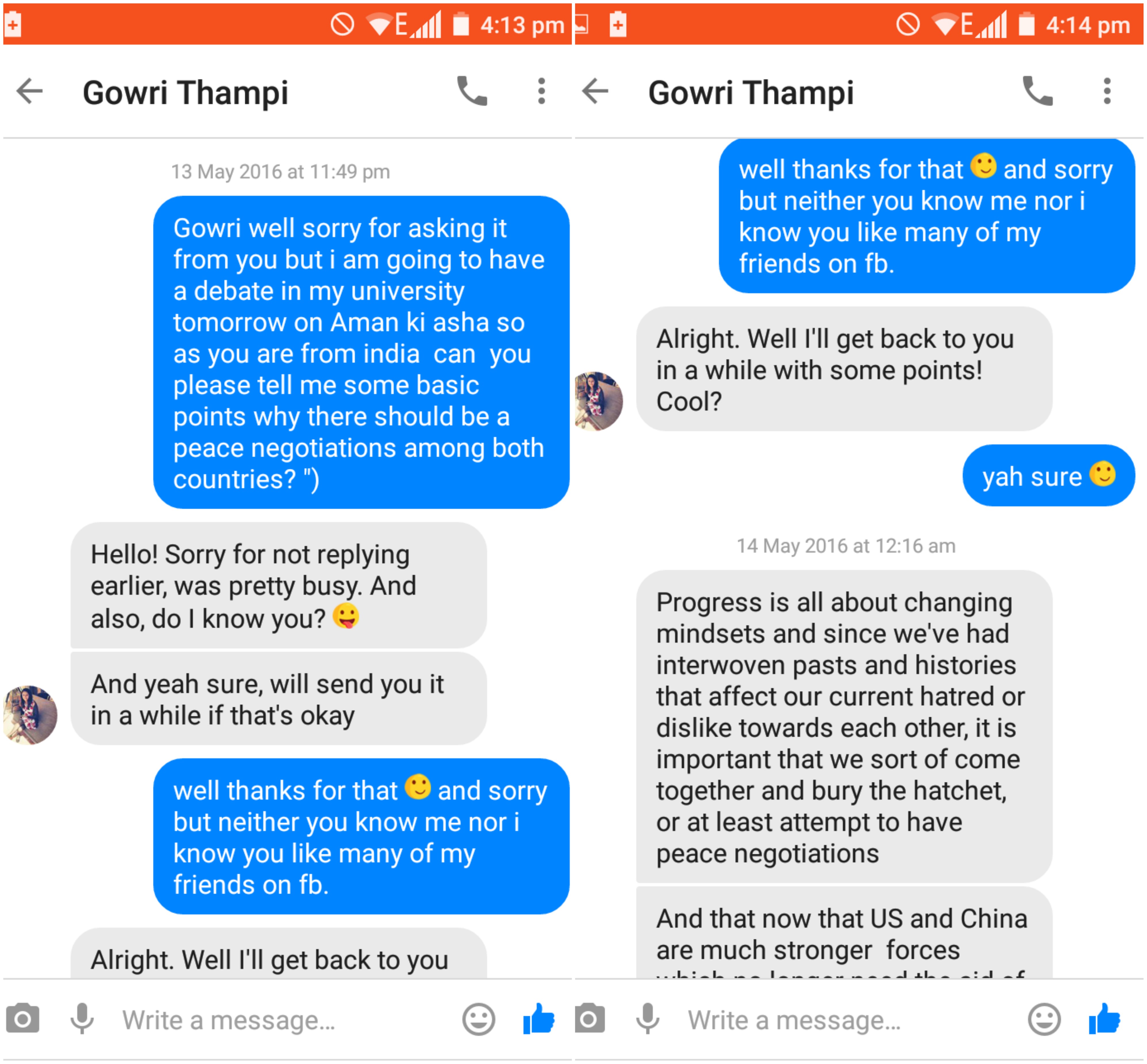 I asked her questions concerning problems between Pakistan and India’s friendship like “Border standoffs” and few other things. I was happy because I didn’t think it would be easy to just ask someone for help whom you thought was your enemy and they assisted you without hesitation. Unfortunately, I lost the MUN discussion but, I didn’t feel bad about it. 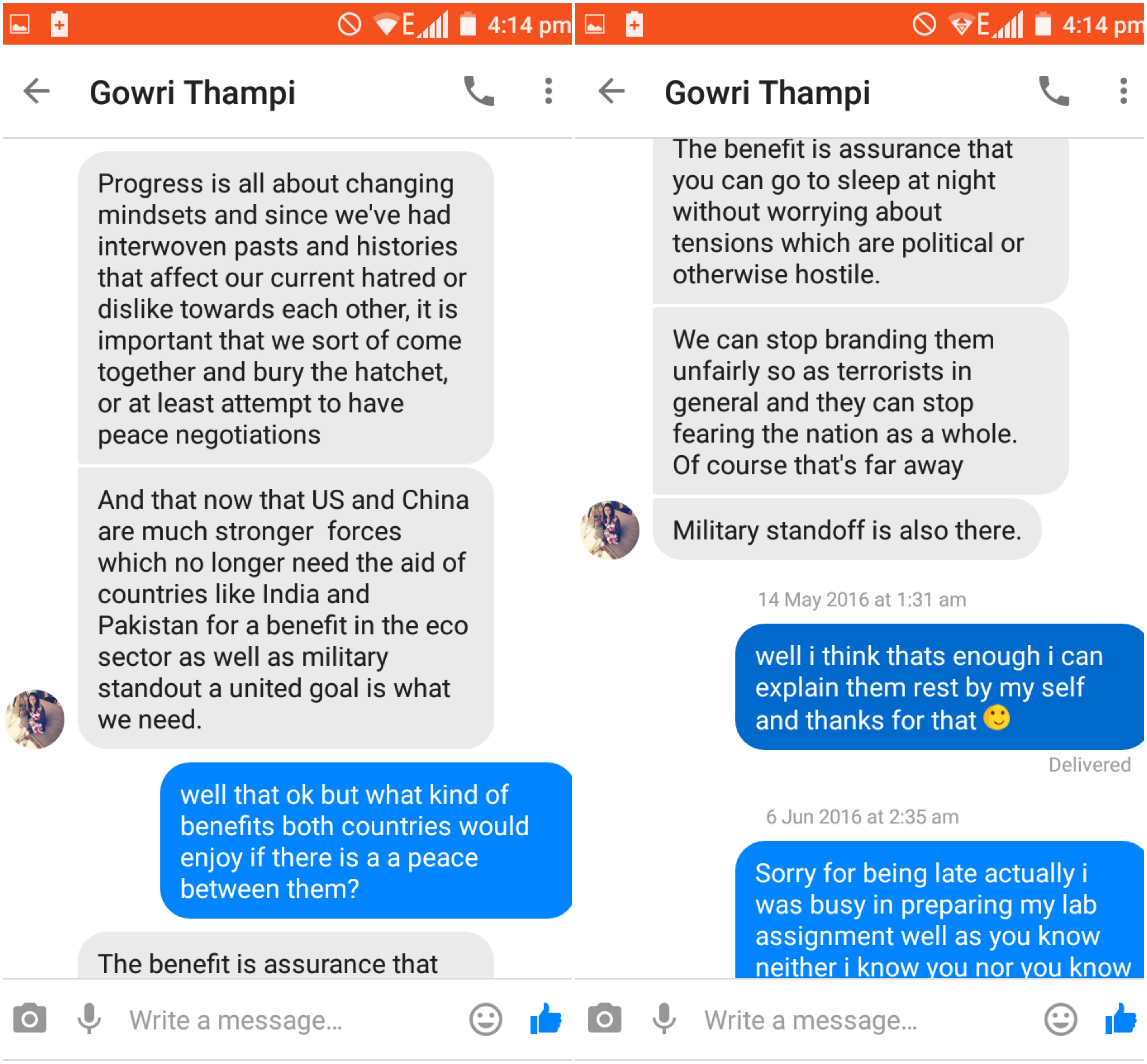 We continued to have a normal conversation on messenger. Gowri was a nice girl and surprisingly she didn’t have any kind of animosity toward my country and its people. 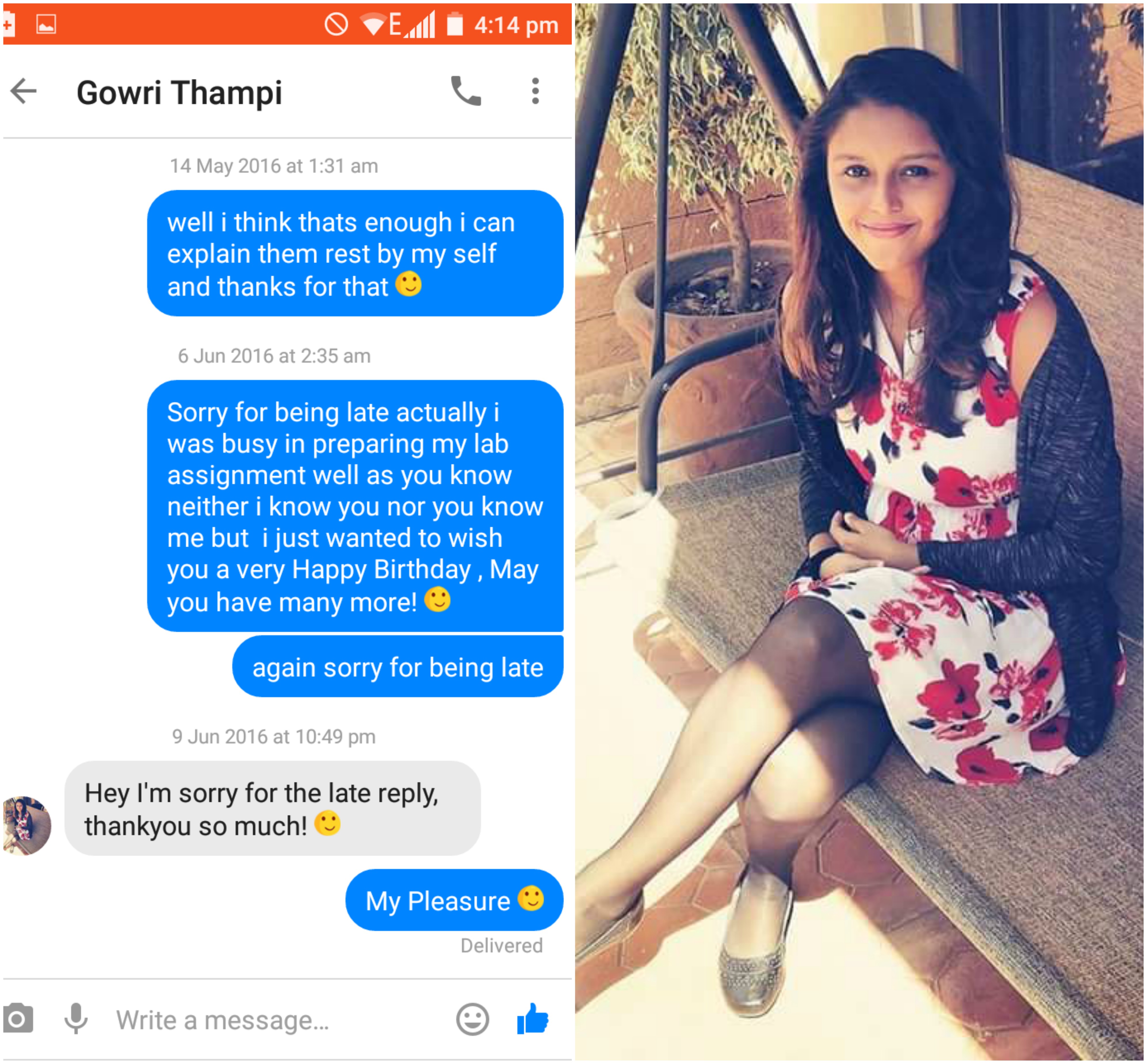 But anyways time passed and it was her Birthday. I sent her a birthday message and after one day I got her reply saying thanks. That was the last message I received from her. A few days later I was checking my news feed and I was shocked to read the eulogy her friend had written on her wall. I rushed into her profile and my greatest fear had turned into reality. Her profile was memorialized and people were paying their condolences on her Facebook wall. I asked few of her friends what happened to her but no one replied. After a couple of minutes, I got a message in my inbox from her friend and he told me that she died due to a sudden cardiac arrest.

It shocked me completely because she was so young and talented. A bright future was waiting for her but; unfortunately, she left us too soon. I left a message on her timeline as a tribute from a friend from another side of the border.  I had tears in my eyes and couldn’t explain anyone about her because I never told anyone about my friend.  But now I have a firm belief that people on both sides of the border want peace and love. Regardless of those sitting in government and making policies for degrading each other. If an Indian girl can stand to help a Pakistani boy then why can’t we all help each other to cope with our problems?

I have a very humble request for you. Please pay her a tribute I just wanted her parents to know that she did her part well. May her Soul rest in Peace.