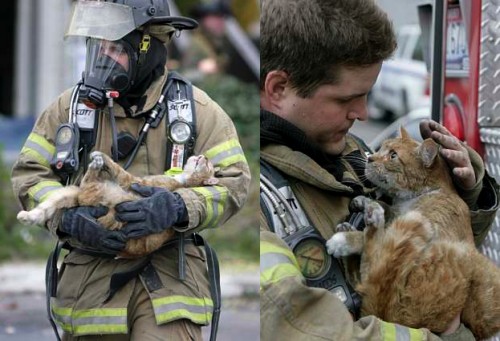 When it comes to the problems we face in Pakistan, the first thing that usually comes to mind is the lack of rights. Lack of rights for men, lack of rights for women, for children, for minorities. You name it and chances are that they are persecuted in some way or the other. But all these people have a voice. To an extent, they can ask for their rights. Have you ever wondered about those who don’t have a voice to speak for themselves? Those that can’t agree or disagree or make any choices so they’re forced to put themselves at our mercy? Have you ever given a single thought to rights belonging to animals? 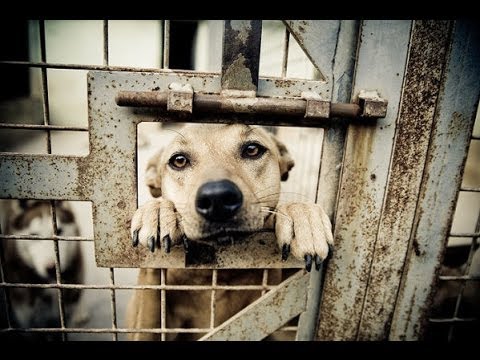 There is legislation in Pakistan for prevention of cruelty to animals but these laws are never followed and a claim under them hasn’t been successful. Ever. This is because the punishments are so meager, there’s no point in suing a person over them.

This may not be a source of concern for some people, but for animal lovers, pet owners or anyone with even a bit of empathy, this is an enormous issue because it has no real solution. If someone sees a person mistreating a dog, there’s nothing they can do about it. If someone poisons your cat, there’s nothing that can be done about it.

This happened in Karachi

This is what happened to the pet cat of a Karachi resident, Hira Saeed. According to her, she took her family cat to the vet Dr Shehla in the Karachi Animal Hospital. She wanted to get the cat neutered, which, contrary to popular belief, is a perfect normal procedure and is actually recommended by veterinarians all over the world. 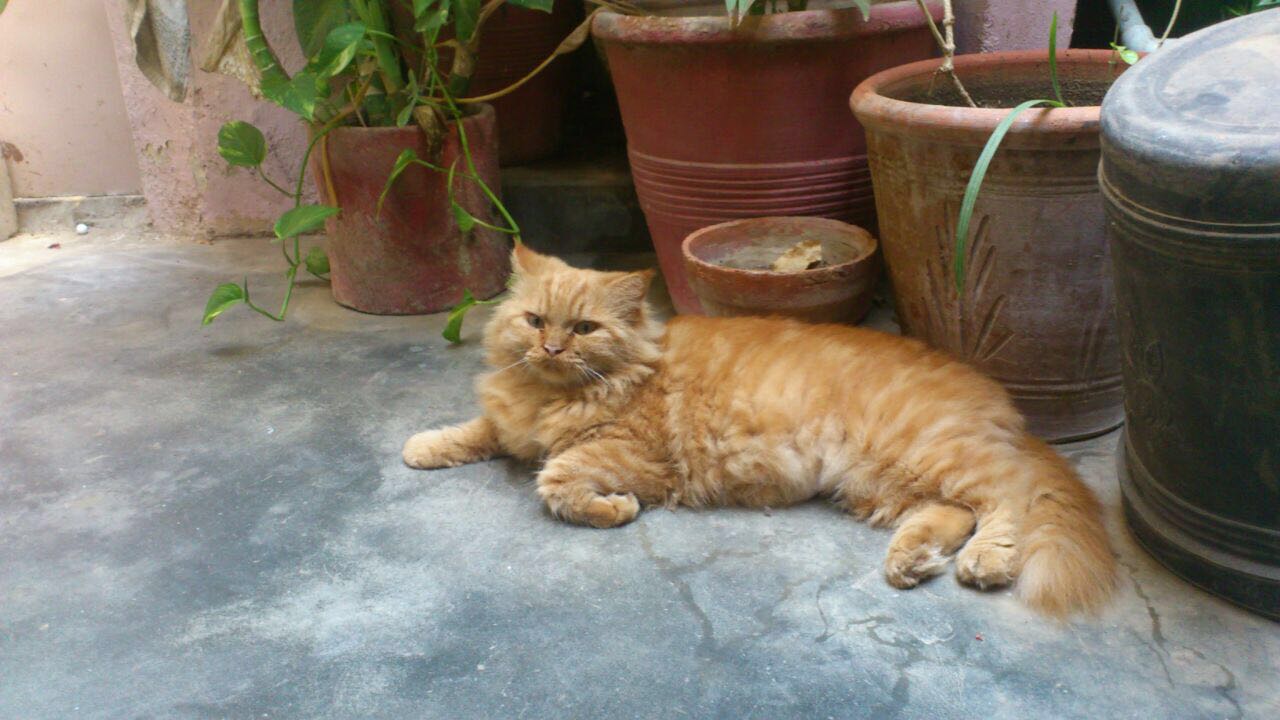 This is the cat, Fluffy.

However, some complications and arose and as a result of it, Fluffy ended up dying. The following is the story as told by Hira herself on Facebook. There is also video evidence in which Dr Shehla admits that the cat’s condition is, at least to some extent, her fault.

“Vet Dr. Shehla Killed our Cat!
Readers, if you have an inch of love for animals in your heart, please share this video ahead.

Case: I took my cat (Her name was Fluffy) to Karachi Animal Hospital to a vet named as Dr. Shehla. Fluffy went for her spay/Neuter surgery which was to be cured within 3 days after the procedure. We took her on 31st May for a checkup, since we rescued her so had a very little idea about her exact age and Spaying is not a wise choice if a cat is above the age of 4-5 years old. We asked the vet and she said she is aged but not that much of any risk. We can do it. We trusted and allowed her to do the surgery and signed the risk note, she asked us to come back after 48 hours. One thing I would like to clear here is that Fluffy’s male cat is unable to mate hence we had to take this decision to make both of them survive otherwise we wouldn’t have opted the spaying process anyways.

The next day my sister called her assistant and asked for some pictures just to confirm if she is doing fine. He sent her 2 pictures in which she was in cage. It was horrifying for me but yes they cant let them wander in clinic so we didn’t panic.

Next day on call, her assistant said that Fluffy is being very aggressive and she has opened her stitches and because of that the infection might cause her “Herniya”. We asked for a solution and he said we have re-stitched her and she will be fine.

We went to visit her next day and she was doing fine though she was scared as hell but we thought of it as temporary pain. That day the vet said that she have to keep it for another day until her stitches get dry. We agreed.
Then comes a real horrifying scene, days went like rush and her assistant kept telling us she is fine and just in the healing process. We trusted once. Next day he said the same thing and we asked if we could come to take her or atleast meet her on which he didn’t reply and since its Ramzan so clinic times were off as well. 2 more day passed and neither he replied nor did he send any pictures even after sending hundreds of messages and making hundreds of calls till midnight. 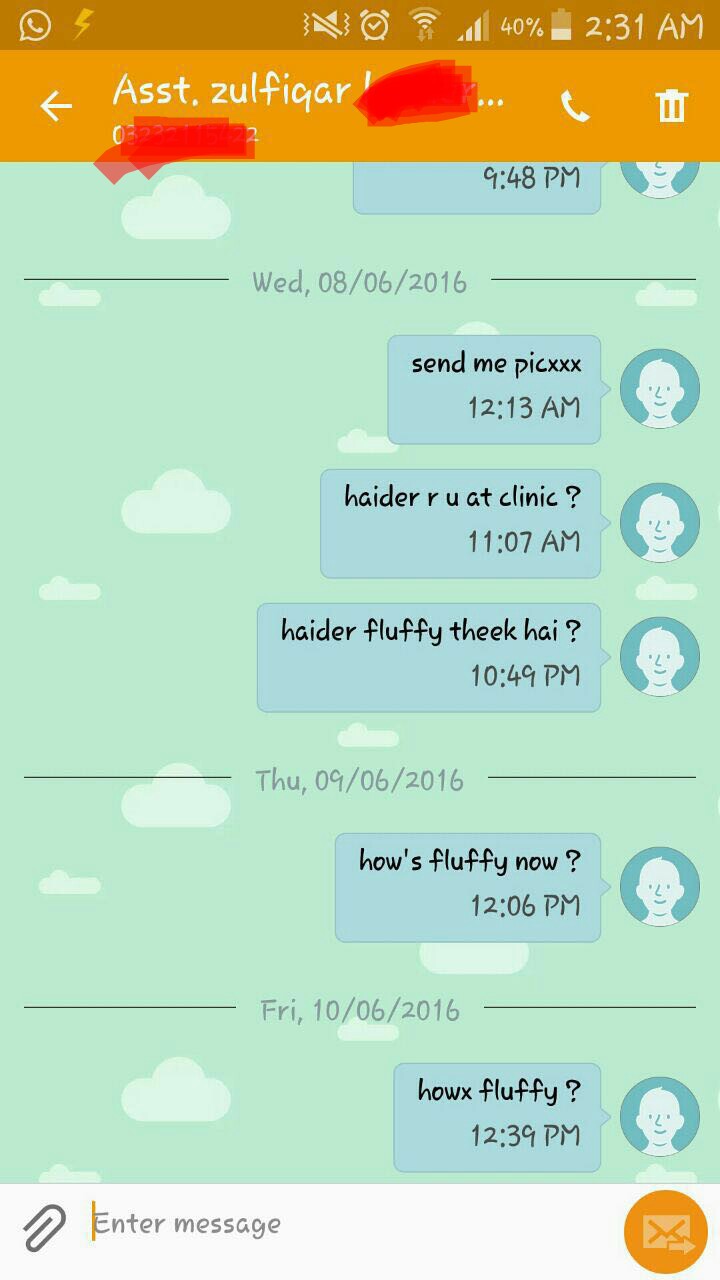 On Sunday, we decided to go there and just before leaving, Dr. Shehla called and said “YOUR CAT IS IN SERIOUS CONDITION, PLEASE TAKE HER HOME” – I took the phone from my sister and had a word with her on which she hung up on me. We rushed immediately and reached clinic. Fluffy was lying on the floor and Vet was there.

The rest of the conversation is in video in which she clearly said that “I cannot keep her because this environment will kill her” – We brought her back to home and Fluffy died within 3 hours.

1. On our way to home we showed Fluffy to another vet and he told us that she is almost 10 years old. Why the eff Dr. shehla didn’t tell us this? Doesn’t she know her real age and agreed to treat her for some thousand rupees?
2. She kept on saying that its too hot here that’s why she isn’t healing, my question is if she wasn’t healing in that temperature why didn’t she tell us? We were ready to take her home and would have kept her in AC to fasten her healing.
3. She did 2 surgeries on her and gave her anesthesia idk how many times knowing that she won’t survive this much sedation in this age. How come this lady is a doctor when she doesn’t know a pin?
4. Her assistant didn’t pick our call or informed us about anything that was happening. Whose fault is this? And he clearly said in the video that HE WAS BUSY.
5. Her clinic stinks like hell and hardly has 2 fans therein. Whose fault is this if any pet dies there out of heat?
6. My cat didn’t survive and she breathed her last in front my eyes. My sister has been crying and cursing her life for taking her there. Who is responsible for the trauma she has been through in fast?

To all those who are reading this and have kept pets in their home, Please let this monster Dr. Shehla know that she is a killer. She is an incompetent and irresponsible doctor who is an insult to this profession. I am unfortunate that I live in Pakistan otherwise I would have sued her and will take a revenge of my Fluffy.” 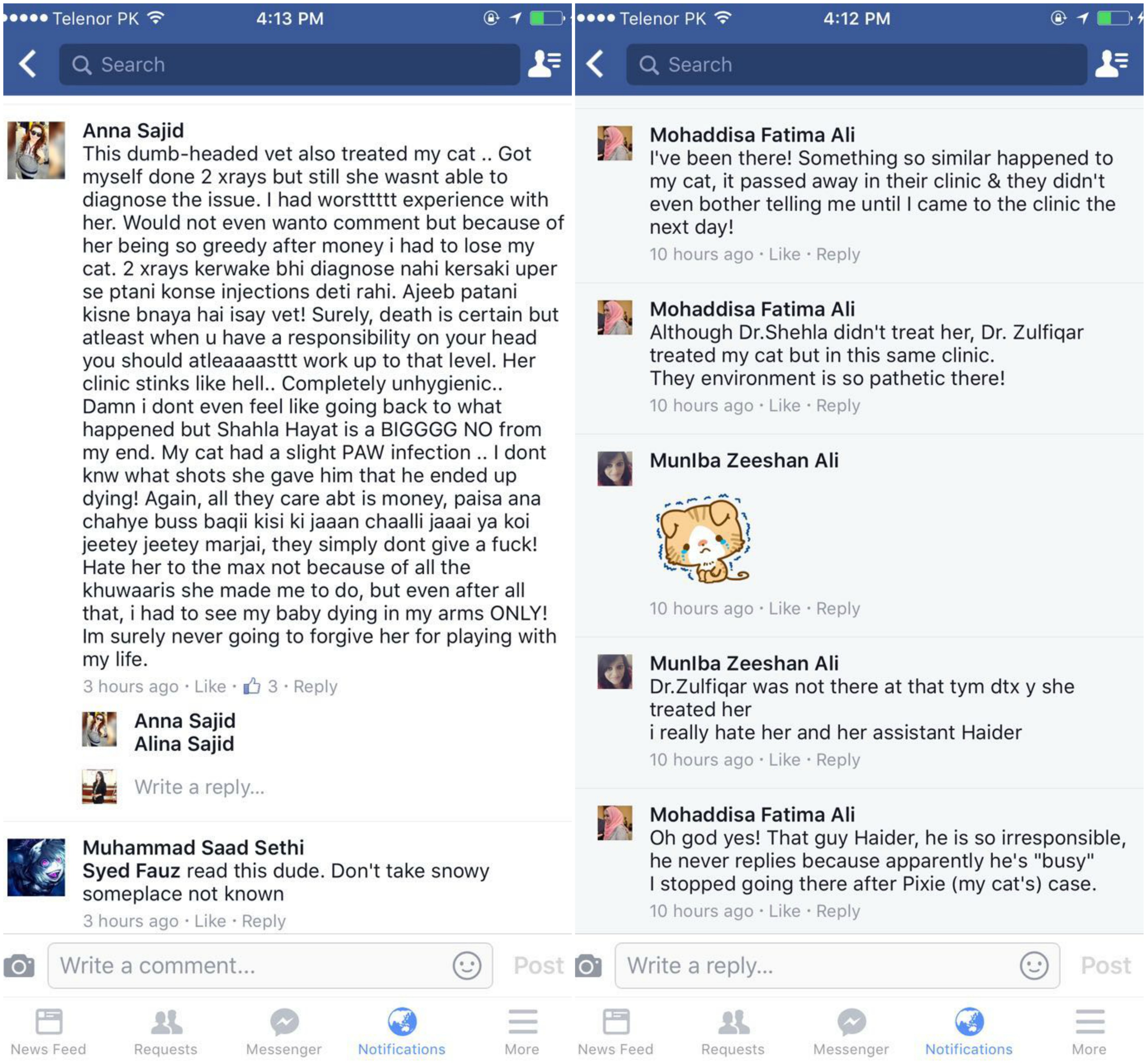 People are saying Dr Shehla has done stuff like this before.

People who don’t have pets won’t understand the kind of loss she’s suffered. Pets aren’t just animals. They are members of the family. They grow up with you. They stay by your side. They love you. They are only a small part of our lives but to them, we are their life.

This dog cried when it visited the grave of its owner

Animals have feelings. Just like us, they feel pain. They feel joy. They feel sadness. They choose to spend whatever time they have in this world with you. Don’t mistreat them. Take care of them and take comfort in their presence because before you realize it, they’ll be gone. 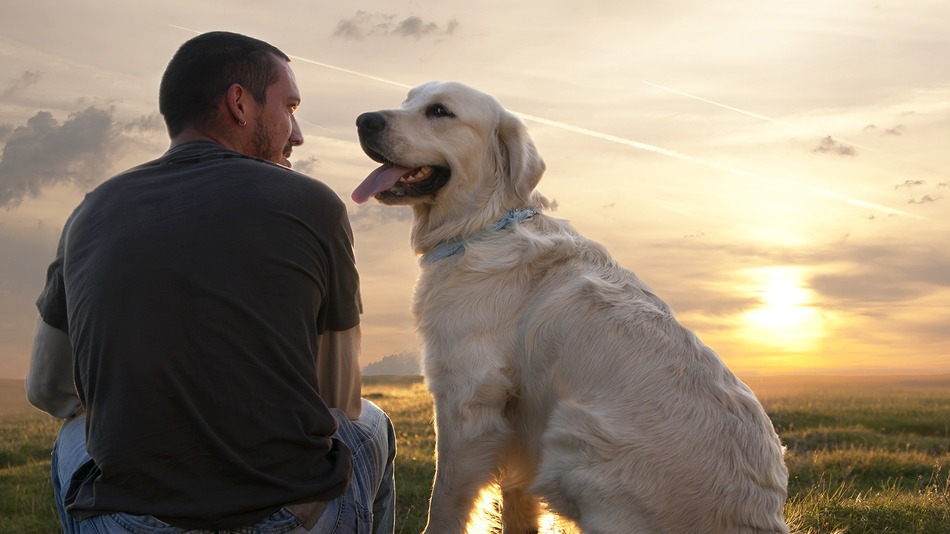