Amir Zaki’s Last Performance in #CokeStudio10 Is Making All of Us Cry! 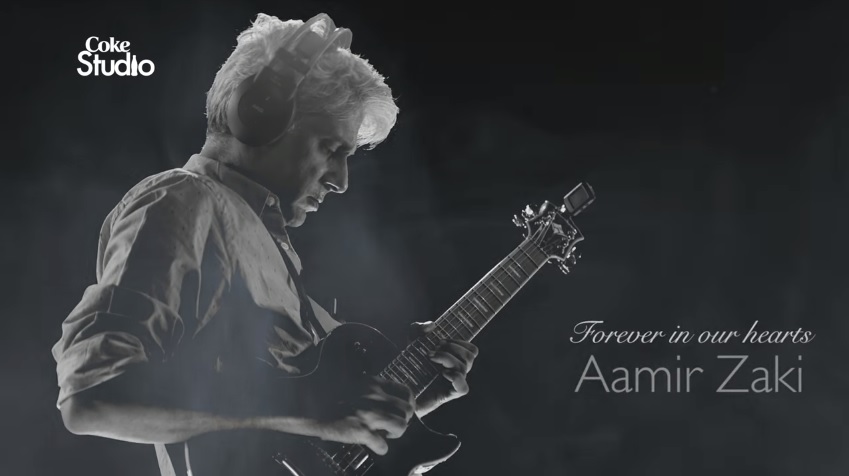 They say Amir Zaki’s signature guitar riffs were enigmatic and his passion for music stood above everything. We have seen the best of him in Coke Studio and now it’s time to celebrate his memory which is what brings us to the episode 4 of Coke Studio Season 10.

The latest episode of #CokeStudio10 is a class apart!

Did you notice how beautifully the acoustic tunes balance everything?

TELL ME HOW MANY TIMES YOU REPLAYED IT!

As he takes the position and works the magic of his guitar strings, we uncover a lot about him and his style. He maintains his iconic stature and the art of poise he once ruled, with a bowed head and humble stare. Next, we hear the magical sound he creates that uplifts everything about the song. The guitar solo is indeed soulful and something that makes you want to close your eyes and savor every second of.

It does not last long yet quickly forms a groove that captures us. Listening to it, you could not expect to hear a guitar solo because it might turn out vague and break the transition.

But then, the innate genius of Amir Zaki exactly knew how the fluidity of such a different song could support such a powerful solo. Indeed, Naina Moray takes a smooth transition of emotions and is fueled by the rhythmic sounds of Amir Zaki’s guitar.

As we listen, we sit here and remind ourselves of what a gem we lost! Thank you, Coke Studio for this! <3

We can never get over Naina Moray, but episode 4 dropped another beautiful surprise that has got us talking…

Yes guys, Ali Zafar is back! After the great rendition of Master Inayat’s Jaan-e-Baahaaran, Ali Zafar pulled off a different style this time. Julie; the song title sums everything: a heartbreaking composition that is playful, joyous and high-spirited. Check it out..

And boy, Danyal Zafar’s powerful guitar solo follows up, which is another reason why we cannot get over Julie!

Moving on, a star-studded cast was another highlight of this episode. and if you’re a Qurat-ul-Ain Baloch and Farhan Saeed fan, then you have every reason to get excited for because these two artists partnered up for Latthay Di Chaadar.

Once again, we see two different vocals combining together in such a simple song. Farhan and QB are two powerhouses and about time we see them together in one song. It’s light and has a positive vibe about it. You can marvel at the smooth transition it takes with the deep and soothing vocals of both artists. WE REALLY WANT TO SEE MORE OF THESE TWO!

Besides, the last song brings Ali Hamza in his formidable fashion with Nirmal Roy, who marks her sweet return to Coke Studio. Their song Jindjaani is a must, must listen…

All in all, the episode 4 of Coke Studio Season 10 has been remarkably overwhelming. Let’s wait and see what the next episode brings.

Refrain from the ‘Cow Syndrome’ and Keep It Religious This Eid-Ul-Azha
Karachi: Sacrificial Camel Tied Up in a Temple Irks Hindus
To Top