This Ramadan, everything is commercial and everything is about ratings. Each ‘Ramadan special transmission’ show is about bagging the highest ratings by stooping to the lowest level. From Sahir Lodhi to Amir Liaqat, every channel and their hosts are battling to see who will be the worse of all.

Safe to say, Amir Liaquat’s show is the worst of all and yet, knowingly, people still follow it and give him and the producers the money they are looking for.

From the scam of giving Mercedes to giving out a jet plane, the show run by Amir Liaquat is a joke. Shame that people used to follow him as an ‘Islamic Scholar’ before his reality was bashed.

Anyway, in the next episode of how an anchor sells himself like a fool stars Amir Liaquat (no guesses there) and guest appearance of Meera Jee.

Meera Jee, Recently, Has Been Taking The Internet By Storm Through Her Amazing Tweets

Unfortunately, for Pakistanis & their judgement, it's the other way around https://t.co/tIdOXiheDv

Amir Liaquat made Meera stand at a certain point present in the set and started asking her questions like, “What makes a woman the best wife?”, and Meera’s uncomfortableness was so easy to see. He said statements like, “Mera yaha intezaar karna, warna mae nahi ao ga.”

Meera continued saying, “Khana bna k. Bache paida karke. Namaze parh k. Shohar k pair duba k. Saas ki khidmat karke.” and other nonsense statements. The crowd, as dumb as the host himself, continued clapping and appreciating whatever which was happening. The stupid act ended with Amir Liaquat announcing how they will start looking for a husband for Meera in the ‘game show’.

People Started Sharing How Absurd All Of This Was! 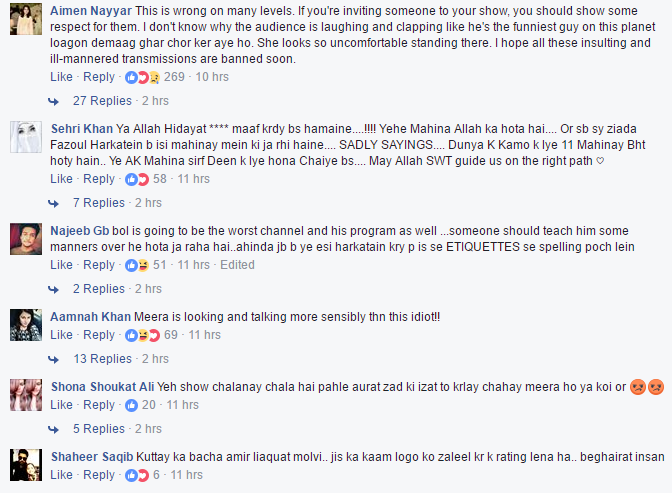 Meera looked extremely uncomfortable while such questioning as if she was forced to answer everything in this way. Whereas Amir Liaquat, regardless of how one may defend him, is a complete disgrace of “molvi”.

A request to everyone – please stop watching these pointless shows and stop giving them the satisfaction of creating money.

This Badass Shoot Of Pakistan Women’s National Cricket Team Is Winning Our Hearts!
This Very Popular Brand of Chocolate Might Be Infected With Salmonella!
To Top