Great news for all the boxing fans around the world as British-Pakistani boxer Amir Khan confirms his fight with Manny Pacquiao, one of the most celebrated boxers in the game today. Unbelievably, Amir Khan was chosen as Pacman’s opponent by his Twitter followers.

Both the boxers confirmed the fight for April, 2017, which is only two months away. Pakistani boxing fans are in for a treat because this will be the biggest fight in Amir Khan’s career yet.

Negotiations between team Pacquiao and team Khan have come to terms for the April 23 bout as this is what the fans wanted. #PacquiaoKhan

For Amir Khan, the fight comes on the back of a lot of scandals and family troubles that were exposed on different social media platforms. Amir Khan might be ready and fit physically but the same cannot be said about him being prepared mentally. The constant social media rambling and defamation between both parties has left Amir Khan stressed. Furthermore, there was also an alleged sex-tape release of Khan, adding to his miseries. 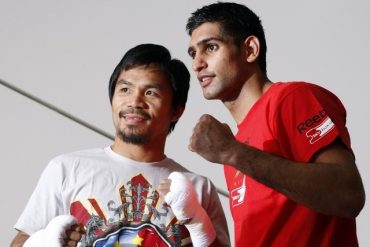 The fights started between Amir Khan’s wife Faryal Makhdoom and her in-laws, that include Amir’s mother, sister, brother, and father. Defaming each other all over social media, the heat started when Amir’s father and brother referred to Faryal as ‘Michael Jackson’. It was later on that Faryal couldn’t take it anymore and replied to Amir’s family the same way they did, claiming that all of them were using Amir for his money. 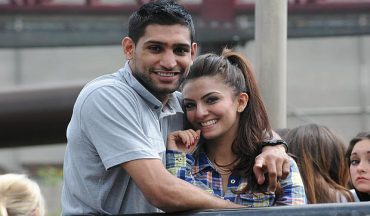 This lead to Amir siding with his wife and child, leaving his family’s house and affection. He even fired his father, who was his manager, along with not attending his brother’s wedding ceremony. Since then, Khan has been busy training in the USA, and now he has got what he wanted – a match against the famous Filipino boxer Manny Pacquaio.

It doesn’t matter if Khan wins or loses, this is a game he deserved after all the trouble he has gone through. The fight will see Khan earn a huge amount of money, along with Pacman, who went into retirement after losing to Mayweather but returned to claim his belt by defeating Jessie Vargas. Khan will also be back from his loss against Saul Alvarez.

We, as Pakistanis, hope and pray that the match is everything Amir Khan needs to get rid of the unwanted attention. We hope Amir defeats Pacman and makes an even bigger name for him and the two countries he represents. Godspeed!

This Adorable Peshawar Zalmi Ambassador Stole The Show Yesterday And The Internet Is Loving Her!
This American Journalist’s Experience With KP Female Elite Force Is Everything That’s Right With Pakistan
To Top