Is Kohli Working In Ertugrul Series As Doğan? This Is What Amir Thinks

There are more than 7 billion people living across the world, many of them resemble each other. Remember the character of Doğan, the alp of Ertugrul, in the famous series Resurrection Ertugrul? He also resembles someone you know. Regarding this, the famous cricketer of Pakistan Mohammad Amir on his official Twitter account asked Virat Kohli a question.

As per Mohammad Amir Doğan, whose real name is Cavit Çetin Güne resembles Virat Kohli. Hence, Amir the national hero of Pakistan, asked Virat Kohli a question, asking “brother is it you m confused”? He mentioned the question above the picture of Cavit Çetin Güne, a brave warrior of the Ertugrul series.

@imVkohli brother is it you m confused 😂 pic.twitter.com/kbwn31yjT6

Although India and Pakistan do not share cordial relations, the cricketers are still showing their mutual respect to each other. Besides, Amir calling Virat Kohli a brother depicts the intimacy of their relation. It is not the first time that these cricketers broke the ice amid tough times between the countries; earlier, Navjot Singh Sidhu came to Pakistan and showcased his love for the land of pure.

Similarly, The legend Shoaib Akhtar on his official youtube channel often talks with his counterparts in India regarding the dynamics of cricket. Furthermore, Virat Kohli once gifted his bat to Mohammad Amir and admired the bowler. During a show, Kohli said: “In the recent times, Mohammad Amir of Pakistan (keeps him on his toes). He is in the top two or three bowlers in the world and the toughest bowlers I have played in my career. You have to be on your ‘A’ Game when you’re facing him or he will strike. Outstanding! Very good bowler!” 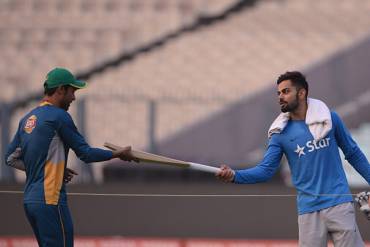 On the other hand, when Virat Kohli got the ‘ICC Spirit’ award, Mohammad Amir highly applauded it. Hence, the cordial relations of cricketers go on despite other realities.

People on social media reacted to the tweet of Mohammad Amir in the following manners:

‘Virat with an arrow’

Some asking Amir to get back to test cricket

Above all, Pakistanis like Virat Kohli for his comments regarding Pakistan and Pakistani cricketers. The tweet of Mohammad Amir brought joy and laughter across the twitter as many actually believe Cavit Çetin Güne (Doğan) looks like Virat Kohli.
What do you think of the story? Let us know in the comment section below!