The famous US travel blogger Cynthia Ritchie is enjoying her time in Pakistan by pondering over the delicious mangoes of the country. The blogger is known for mentioning Pakistan on her social media and always seems to express her appreciation for the nation.

Cynthia Rithie’s love for Pakistan isn’t seeing an end. Recently, she uploaded a picture on Twitter where the blogger can be seen sitting inside a rickshaw with her sunglasses on. The tweet read, “Here I’m caught red-handed trying to drive off in a rickshaw. The plan was to pick up as many mangoes as possible. The only problem is I don’t know how to drive a rickshaw,” to end it with, “And I think I scared off potential customers.”

Here I’m caught red-handed trying to drive off in a rickshaw. The plan was to pick up as many mangoes as possible. Only problem is I don’t know how to drive a rickshaw.. 😅

And I think I scared off potential customers.

Considering that Pakistan is a country where women barely drive motorcycles and rickshaws, this tweet got extra attention. People appreciated another gesture of a foreigner trying to display Pakistan within a ‘positive’ light. Moreover, Ritchie also seems to call out the poverty and various societal issues within the southern regions of Pakistan as well.

As a reply to a tweet mentioning that she should visit areas like Sindh and Balochistan too, she said, “I’ve visited the areas/people suffering, and do make related posts. There are already many focusing on the negative aspects of PK, so balance is important” 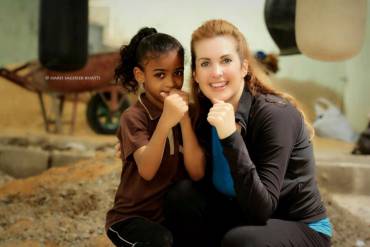 Moreover, regarding Jeremy McLellan leaving for Islamabad for ‘Helping Hand USA’, Ritchie said that he should definitely try out the mangoes. Basically, McLellan tweeted, “Leaving for Pakistan tomorrow where I’ll be spending two weeks in the areas around Islamabad with a youth team from Helping Hand USA. Please say a prayer for our work and follow me on FB, Twitter, and Instagram for daily updates. Pakistan Zindabad!” to which the blogger replied back as “Your Consul General awaits. With mangoes. Lots and lots of mangoes. Looking forward to seeing you in Islamabad!”

Apparently, she is hooked on mangoes and honestly, no can blame her! Probably because Pakistan is included in one of the countries that produce the largest quantity of mangoes. Many tourists come to the southern regions or the big cities to taste the infamous mangoes of the country. Moreover, foreign food bloggers who visit Pakistan for trying out the cultural food and spreading positivity, have mentioned Pakistani mangoes as an out-of-the-world experience! And yes, about 90% of Pakistan would agree as well.

Not to mention, her post showing her eagerness towards the monkeys in the north of Pakistan had gone viral as well!

It read, “PSA: Don’t feed the goats – or, especially, the monkeys when you travel to the hills north of Islamabad. They can be aggressive! I learned my lesson! (note how far away the cameraman is)”

PSA: Don’t feed the goats – or, especially, the monkeys when you travel to the hills north of Islamabad. They can be aggressive! I learned my lesson! (note how far away the cameraman is).

However, people had started to make jokes about her considerable ‘excitement’ towards the animals and scenario, in general. The blogger had withstood it enough so she said, “For 2019, I will no longer respond to peeps w/ a history of being mindless twits, patwaris, khotas, chawwals or lifafas – unless they have something meaningful to say in civil discourse w/ reasoning & intellect”

Nevertheless, her popularity in Pakistan won’t be seeing a drop soon!

What do you think of the situation? Do you support Cynthia Ritchie and her opinion on Pakistan? Share your thoughts.