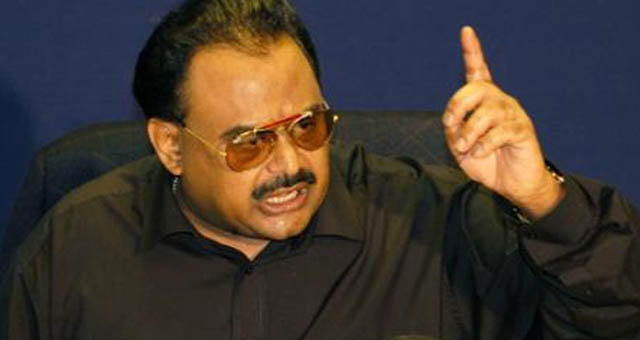 KARACHI: Muttahida Qaumi Movement (MQM) chief Altaf Hussain was released on bail four days after he was arrested on the suspicion of money laundering by the London Metropolitan Police, DawnNews reported.

Police sources said Hussain was released on a personal bail without any charges framed against him with the condition that he would appear before authorities whenever required.

Soon after he was released, he addressed via telephone his party lawmakers and workers who were participating in a sit-in protest at Karachi’s Numaish Chowrangi against their leaderâ€™s arrest in London.

Hussain commended the participants of the sit-in for their passion and commitment, adding that truth must always be spoken.

The MQM chief said he had remained patient throughout his recent ordeal and did not beg for his freedom. He further said that he and his party knew how to stand up to oppression.

Hussain said: â€œI salute those who participated in the sit-in protest against my arrest. I will continue to fight for the truth until my last breath. I respect the British law and have complete trust in the British judicial system. I am prepared to go to jail for a refresher course.â€

He admitted that the Pakistani prime minister had played a positive role in the matter and expressed his determination that, if necessary, he would be prepared to sacrifice his life for truth.

Hussain also thanked traders, transporters, scholars and artists for supporting the MQM during a difficult time. He also said that all former colleagues who were angry with the MQM have been forgiven.

The MQM chief directed his supporters to end their protests and concluded his speech by praying for Pakistanâ€™s deliverance from all internal and external dangers.

Hussain was arrested in London four days ago on suspicion of money laundering. Immediately afterwards he was shifted to the Wellington Hospital over concerns to his health and underwent angiography and other tests.

Having been discharged from the hospital, Hussain was taken to the Southwark police station where he was questioned for nine hours.

His bail application was accepted and he was released on early on Saturday.

Police source were quoted as saying that the 60-year-old, who had been detained for interrogation over money laundering suspicions, was released on a personal bail without any charges framed with the condition that he would appear before authorities whenever required.

A large number MQM activists along with party leaders Rauf Siddiqui, Babar Ghauri, Farogh Naseem and MPA Khawaja Izharul Hassan were present outside the police station waiting to welcome their party leader upon his release.