Rumors Of Altaf Hussain Converting To Hinduism Have Made Many Angry!

The infamous leader of the Muttahida Qoumi Movement (MQM), Altaf Hussain who has been living in London for the last two decades, shocked the general public of Pakistan by making a bizarre demand on India’s Republic TV.

While speaking with Arnab Goswami on “The Debate”, he requested for asylum in India. Although Pakistan doesn’t expect much from Altaf Hussain, given the hate-mongering history of the MQM leader – this request still came as a disappointment to many.

Now, on top of this request, another news published in a local Pakistani newspaper has led to an uproar.

This news was published in Wednesday’s newspaper and senior journalist anchorperson Nadia Mirza even confirmed from the sources, for this shocking news to be true. Altaf Hussain’s hate-speeches against the military, Pakistan and the over-all political scenario made it evident that his loyalties do not lie with the nation’s stability and well-being.

However, according to the responses of Pakistanis – they didn’t expect Altaf to take such extreme measures to satisfy the Hindu-extremist leader of India and the controversial citizenship bill that was passed earlier; only allowing non-Muslims from three adjacent countries to gain Indian citizenship. 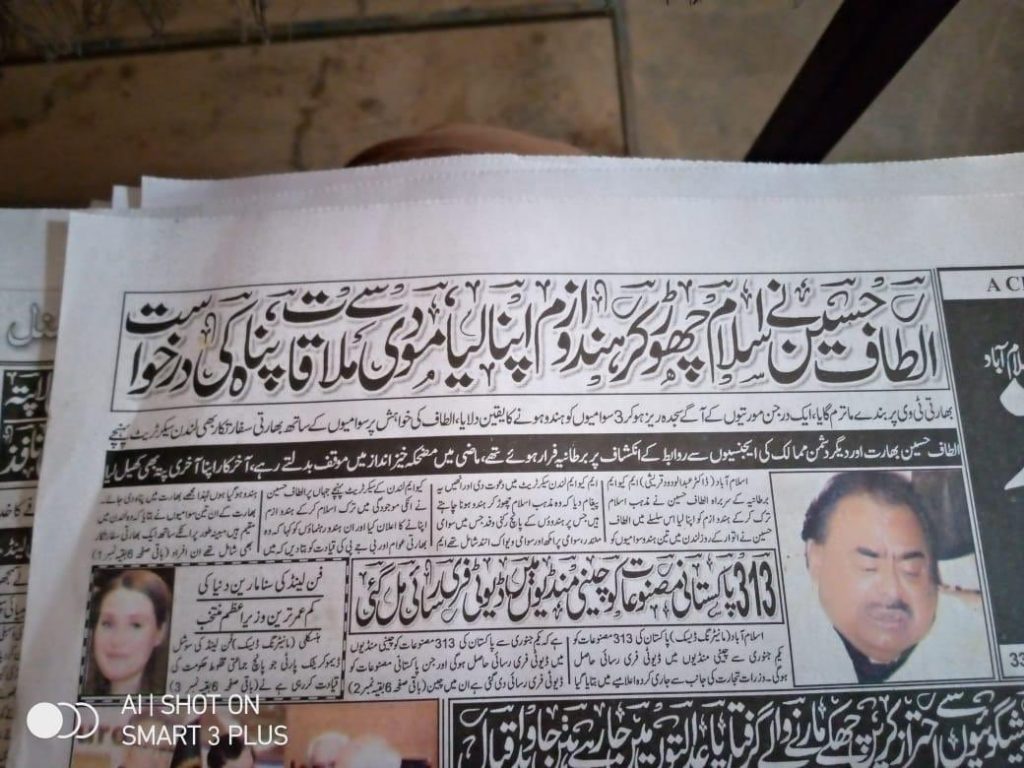 Nadia explains the extremities of Altaf’s decision on leaving Islam when his own grandfather was a renown ‘Mufti’ in India. In addition, Altaf’s father was a station master there, she explains. Nadia informs that Altaf following his asylum request, changed his religion to Hinduism, in order to gain Indian citizenship.

Nadia says that the editor of this particular newspaper has confirmed the news himself.

Nadia continues to shed light on the details provided to her; which included Altaf being ashamed of his entire lineage being Muslim. However, where this news is making headlines, Shama Junejo declined this information as she confirmed with Altaf Hussain’s right hand.

Calling it completely baseless, Azizabadi also deemed it as a ‘bullshit’ story.

This new progression in Altaf Hussain’s conversion controversy, definitely makes the news uncertain. However, who is on the lying-end, is hard to distinguish.

Pakistanis serve their verdicts over ‘Altaf converting to Hinduism’ rumor.

Many are questioning the authenticity of this news.

The supporters express their disappointment.

Even if Altaf Hussain had played little sensibly, the situation would be different and the city hadn't lost its representation.

A cry of appeal for him to not leave Islam.

If this is true,
I feel sad and sorry for a believer going astray,
Only because of any x, y, z reason.

WE THE PEOPLE OF PAKISTAN AND ISLAM
ASK ALTAF HUSSAIN NOT TO LEAVE
THE FLAG OF PROPHET MUHAMMAD PBUH. https://t.co/SbISHthKK4

So far, Altaf Hussain’s request for asylum in India hasn’t been responded to by Prime Minister Modi. In addition, the news of him converting to Hinduism and leaving Islam has been rubbished by his right hand; so what is Altaf’s future or end, is still yet to be unveiled.

Why Is The Country General Manager At Careem Calling Customers?
Lawyers On Strike For Their Arrest In PIC Rampage!
To Top