Recently, the price of US Dollar against Pakistani Rupee went up, meaning devaluation of our local currency. The Pakistani Rupee took a staggering nose-dive and it has been the lowest in history. This is an alarming prospect and calls for our attention towards an upcoming economic crisis at large. 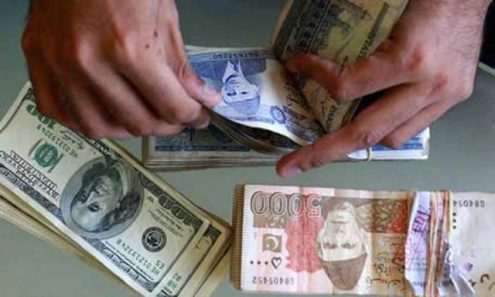 As the Rupee crashed and the market went down, economics experts and advisors surge into a debate, strictly criticising the government’s policies. Meanwhile, the entire nation is engulfed by the cricket fever and many have chosen to ignore a major problem sitting on our doorsteps. Mainstream politicians have been discussing this problem for days now on various media platforms. You can expect Imran Khan to go full throttle against the government and the Sharifs.

As if Sharifs' & Dar's crime of money laundering & corruption had not taken enough of a toll on the country's economy, the disastrous policies of Dar have led to the rapid fall of rupee value over the last few months, piling up the mountain of external debt for Pakistani nation

Meanwhile, Ali Zafar, a man who needs to introduction, popped out of nowhere and reacted to Imran’s particular tweet. He meant to point out that the whole nation is uplifted by the cricket fever and one should celebrate as cricket comes to Pakistan. In this time, discussing any other topic, especially a “problem” does not seem fit.

and then Ali Zafar said this…

Sir, we do love you for your efforts for the country but perhaps “timing” on issues matters? On a day nation celebrates cricket we do expect you (as our cricket hero) to appreciate, if not participate in the joy and sentiment of the country that comes with cricket coming home 🙂 https://t.co/7RGDkVb4VU

So, Ali Zafar wanted the likes of Imran Khan to ignore a major problem surrounding our country’s economic spectrum and rather talk about our progress in cricket.

Pakistanis are not having it all and Ali Zafar got seriously bashed!

Here are some quick facts:

Yes, we cannot ignore a major problem no matter what…

Mr Ali Zafar today is the most appropriate day to highlight the grave economic situation Pakistan is facing. We would appreciate if you would leave film, music etc at least for one day & think about the poor people suffering due to the economic mess created by our corrupt rulers.

Absolutely correct; a leader has got bigger concerns

Nonsense Ali. He's a leader, he has better things to do (for example voicing his concerns over the country's failing economy) than commenting on T20 leagues.

Don't get your hopes up @AliZafarsays. He's probably banging his head to the wall right now because apparently credit will go to @najamsethi and govt to bring cricket to the home. Anything which gives credit to govt is a big no to IK, even its at cost of Pak.

Bruh delete this. He shouldn't talk about economy cuz there is a cricket match on? What???

It did not go well at all for Ali Zafar here. Maybe he was just being too naive because, in such times, our politicians at least should get their priorities right and concentrate on the bigger problem.

‘Tabdeeli’ Arrives As Aamir Liaquat Hussain Protests Against VIP Culture On His Super Bike In Karachi!
The Internet Reacted To Peshawar Zalmi Vs Karachi Kings In Very Hilarious And Witty Ways!
To Top