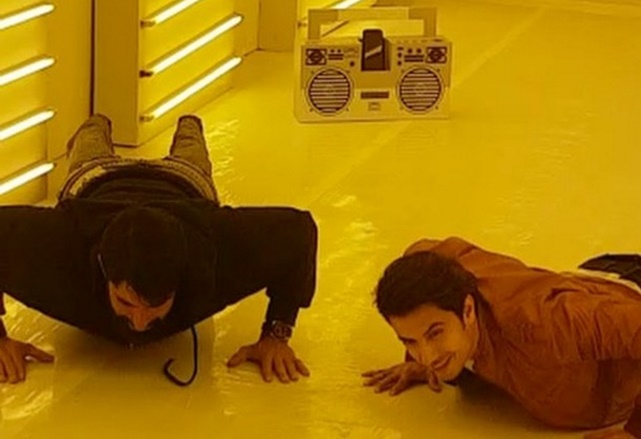 Misbah-ul-Haq once performed push-ups in the middle of the pitch after an impeccable century he scored in a Test series and made history.

Pakistan Test cricket team captain Misbah stole the headlines, engrossed everyone with his push-ups and set a new trend. Ever since Misbah’s performance, the push-up challenge became one of the popular trends circulating the social media. It was until when Pakistan Cricket Board barred the team from doing push-ups.

Anyway, PCB could ban the team from performing push-ups on the pitch but they could not stop thousands of us following the iconic trend led by our beloved Misbah. The push-ups trend started last year has gone to unimaginable heights. Everyone seems to be doing it…

Talented Pakistani singer, actor and an individual of many other expertises, Ali Zafar is once again returning to compose the official theme song of Pakistan Super League (PSL) season 2.

But we are not going to talk about that just yet… Ali may be busy in composing the new OST of PSL 2017, but he is also quite getting along with the players. Ali Zafar is gearing up the spirit of the tournament with none other than Misbah-ul-Haq!

We take on Instagram, where Ali Zafar posted a video starring him and Misbah doing the glorious push-up challenge.

Here are the two legends combining together to presenting us fans a remarkable treat:

The push ups celebration was a welcoming change that is still taking on the social media, evident of two legends doing it in this video. Not to forget, the new theme for the PSL 2017 is being played in the background.

Who do you reckon won the push-up challenge? My money is on Misbah, although it is hard to tell who lasted longer, did more push-up sets and won the challenge and we definitely cannot underestimate Ali Zafar at all. Simply no chance. We do not know who is a winner here since the video ends without declaring the winner of the challenge. However, it is still enthralling to see these 2 stars involved in this elevating performance.

We do not know who is a winner here since the video ends without declaring the winner of the challenge. However, it is still enthralling to see these 2 stars involved in this elevating performance. This is one of the teasers of what an exciting tournament involving legendary cricket players and star-studded celebrities we should anticipate ahead.

We are definitely up for the new season when it begins next month.

This Is Why HIV/AIDs Patients Should Not Be Neglected And How The Disease Can Be Prevented
Shahid Afridi, A Possible Contender For Governor Sindh
To Top