Ali Zafar has been in the news from quite sometime now. From the allegations by Meesha Shafi of sexual harassment to the promotion of his upcoming film Teefa in Trouble.

The allegation rose when Meesha Shafi came forward on her Twitter. With Ali Zafar first denying the claims, he then filed a case against Meesha Shafi and since then no evidence in favor of either party has surfaced.

On the other hand, social media warriors continue choosing their sides. While it is evident how sexual harassment is taken extremely lightly in our country, many started accusing Meesha of making it all about a stunt fame, while calling Ali Zafar the ‘honest, family’ man. Allegedly, it has also been said that Ali Zafar hired social media PR team to fix his tarnished reputation over these claims.

Oh and How Can One Forget the Patari Debacle Cut Short, A Lot of People Believe How Ali Zafar Really Is Guilty The Way He Has Been Acting In Subtle Manner Lately

Hiring paid PR, using Twitter users to speak against Meesha Shafi and those who defend her and also asking Patari to move down the song, it all makes sense. Given this, he has indeed lost a lot of supporters and fans.

Just Yesterday, Ali Zafar Was On His Way to Promote Teefa in Trouble and Something Happened

Protestors came outside KFC, where the promotion was set to take place. These protestors held posters of Ali Zafar’s movie and had crossed all over them.

This all took place in Karachi, jbtw.

And Ali Zafar? Well, He Was Surprised! 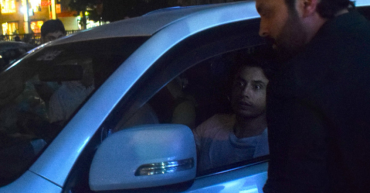 And People Have Been Talking About this As Well

ali zafar really got shamed outside of KFC, the international hub for unhealthy conservatives and patriots, you could never live to redeem yourself from that kind of embarrassmen t pic.twitter.com/sR7bVgwZ3x

Well well well, so there are people out there who realize how hiring a team of PR to fix your image won’t always benefit you.

Whether people will watch Teefa in Trouble or not, now THAT is a question!