Times Square Is Showcasing Ali Sethi On 13 Screens For A Whole Week!

Ali Sethi’s vocals have entertained Pakistanis this year and the famed singer is ending his 2019 on a bigger note by literally being featured on Times Square, New York. The singer has had a successful streak, where he entertained Pakistanis and International fans with hits like Dil Ki Khair, Ishq, and Chandni Raat; coupled with some smashing Coke Studio songs that include Mundiya with QB and Gulon Main Rang. 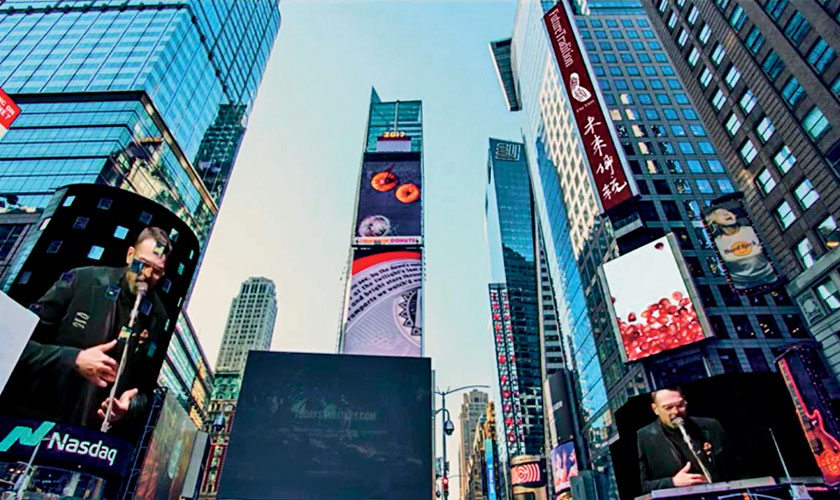 Now, his hard work and passion have earned him a spot twice a day for a week straight on Times Square. In fact, his pictures have started to display on those large screens on the famous tourist spot. Of course, for those who aren’t there were finding it hard to believe. Those hints of doubts were laid to rest, as the sources suggest that this is very much a reality. Ali Sethi himself gave the green signal.

Ali Sethi confirms his images being displayed on Times Square; explains why he made it to the screens of NY.

Ali explains the plot and says, “It’s part of a tribute to the Chinese American composer Du Yun; I was a soloist for her at Carnegie Hall. So they’re playing a video clip of me from that show!”

He announces this achievement on his Instagram like an excited little boy. He writes, “YASS TIMES SQUARE: guess who’s gonna be featured here on 13 screens twice a day for a full week? C’est moi, that’s who!”

YASS TIMES SQUARE: guess who’s gonna be featured here on 13 screens twice a day for a full week? C’est moi, that’s who! Along with a bunch of amazing artistes who collaborated with global music force @duyun in 2019 💖🎶🧚🏾‍♂️ GO SEE IT IF YOU’RE IN NYC! Display runs twice a day (morning + evening) Dec 15-21 (you’ll see me 16 TIMES on Dec 16th!!!) 🎶😍✌🏾#FutureTradition brought to you by Beijing Century Foundation and Times Square NYC #alisethi #duyun #timessquare #nyc #2019

13 screens is a lot and Pakistan couldn’t be more excited for Ali Sethi. In case anyone is unaware of Ali Sethi, we have jotted down some important pointers regarding this Coke Studio sensation. Recently, his sister Mira Sethi tied the knot and Ali serenaded the couple with his melodious vocals. The lucky sister didn’t need music in the background when you have such an impeccable live performance.

Coming back to his perfect ending nod to 2019 – Sethi and Du Yun joined forces in 2019 to create a classical masterpiece for New York’s Carnegie Hall. Times Square will be displaying a snippet from that performance along with the displays of other artists, as well.

Ali Sethi a novelist too.

Ali Sethi is multi-talented; not only he is a great vocalist but also has written a novel, that to NOT our surprise has received global recognition. Touche’. He makes us wonder what hasn’t he done that didn’t become an instant sensation? From Coke Studio hits, individual solo success and now his book gaining international acknowledgment. He is a true megastar of Pakistan and the country is proud of his achievements.

We wish him a Happy New Year and hope he becomes even bigger of a star in the coming year.

Are you excited too? Let us know in the comment section below!

Lawyers On Strike For Their Arrest In PIC Rampage!
Transport Minister Visits Careem’s Offices As It Completes Its 4 years!
To Top