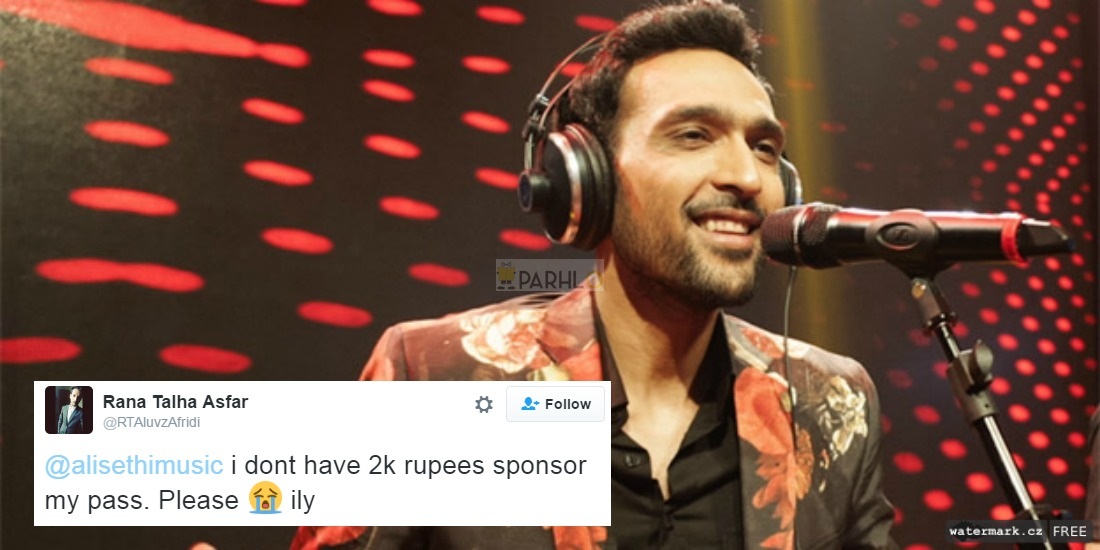 Ali Sethi, Pakistan’s number one star and heartthrob of 2016, is definitely adored by millions all over the world. Ali is not just a prolific singer, but a jack of all trades. Talent aside, Ali Sethi’s personality is winning Pakistan’s hearts and what happened on Twitter is the perfect example of his charm.

Ali Sethi’s social media presence is much admired by his fans. His Twitter followers often tweet him, hoping for a reply or response. Sethi tweeted about his concert and one fan, who did not have money for Ali Sethi’s concert tickets, tweeted him to get a reply.

The fan tweeted him out of curiosity as twitter often acts as the tool of engagement between celebs and their fans.

i dont have 2k rupees sponsor my pass. Please 😭 ily

What happened next absolutely blew the fan’s mind and sent him into an awe-inspiring shock..

OK. Send me your number!

And from there on, the fan’s excitement could be seen from his tweets!

did ali sethi just ask for my number
omomgomgodmfowamfksanfcskjancmkdsnvcksdzfxcmsabejadasdx

Envious, the rest of the tweeps also started tweeting at Ali Sethi in hopes for free passes, or whatever else they wanted. However, it is pertinent to note here that Ali Sethi’s attitude and humbleness perfectly backs his talent and makes him one of the most adored celebrities in Pakistan.

Fans often dream of attending free concerts to their favorite stars, to be lucky enough to actually have the tickets sponsored through your favorite stars is goals AF’. For Ali Sethi’s fan, the incident made him respect the star even more. “Like I just randomly tweeted that if he could sponsor my ticket and he was like send me your number, and he is like no worries let me arrange two passes,” the fan told Parhlo.

To the fans, an act of kindness is a huge thing and it says a lot about how much a star actually thinks of the people who make him what he is. For the star, the small act doesn’t cost or mean much but it talks volumes about his nature. Ali’s phenomenal gesture has left many on social media speechless, especially his critics who think ‘he has an ego problem’ or ‘his fame is because of his father’.

More power to you, Ali Sethi!