Aima Baig and Shahbaz Shigri have been capturing everyone’s attention lately because of their recent hangouts that they have posted all over Instagram.

It seems they haven’t released anything to the public regarding their relationship, but their social media posts have to say something else. Aima has always been silent about her relationships and love life and hasn’t announced much of it to the public.

Even though, people did suspect her and Sahir Ali Bagga, who she featured in Coke Studio with, to be interested in each other. But she remained silent about those rumors as well. Yet, now she posts a lot of pictures with Shahbaz Shigri and people have started to speculate. She hasn’t denied any of the rumors and has, more so, uploaded even more pictures with him.

The last straw for the fans was when Aima and Shahbaz traveled to the U.S together. They didn’t upload pictures of each other together while traveling but people were quick to capture hints in the pictures on their individual accounts.

Here is a picture that Aima posted of herself with the location set to Washington. She can be seen sporting a chic orange jacket while a glowing machine with the words ‘galactix’ is situated behind her.

Afterward, Shahbaz posted his own picture on his official account and the location appears to be similar. The same machine is located behind him. And even though Aima posted her picture weeks after Shahbaz, it is still safe to conclude they went abroad together because they’ve been good friends for a while now.

Game Over. Try Again? Am I trying to figure out whether I want to go home and sleep or if I want to keep playing video games? Hell no! I’ve got my priorities damn straight. Definitely playing more video games. 🤖🎮🕹

Moreover, this isn’t the end of it. There have countless pictures that they have posted of each other on their accounts. Even if the official word isn’t out, fans still believe that they are an official couple.

Here are some of their pictures that started to stir debate regarding their relationship.

Aima Baig uploaded this on her official Instagram account and so did Shahbaz. This was the post that fed questions in her fans’ minds as to what might be going on between them. However, Aima as well as Shahbaz, both didn’t mention anything and continued to display themselves as good friends.

Once again, this cute selfie between the celebrities was adored and welcomed throughout. People complimented their skin, hair, styles, everything, and even raised brows at their relationship.

If orange is the new black, then what the hell happens to black. Caught mid-inhale by @aima_baig_official as I take in the Sacramento breeze. 🔸️◾🌤

Lastly, this picture ended up stirring Pakistani Instagram as well but left a lot of questions.

Although they look like great friends or a potential couple, some have even been raising the issue of Shahbaz Shigri being married. However, he broke up with model, Aisha Linnea more than a year ago. They had been a couple for ten years but had to part ways because of personal reasons.

Seeing posts of Aima Baig and Shahbaz Shigri together, people were quick to compare. Though, comparing one person to another in regards to who has more ‘class’ isn’t healthy nor nice. It can be hurtful to the other person. And dismissing these comments is a part of the problem as well. 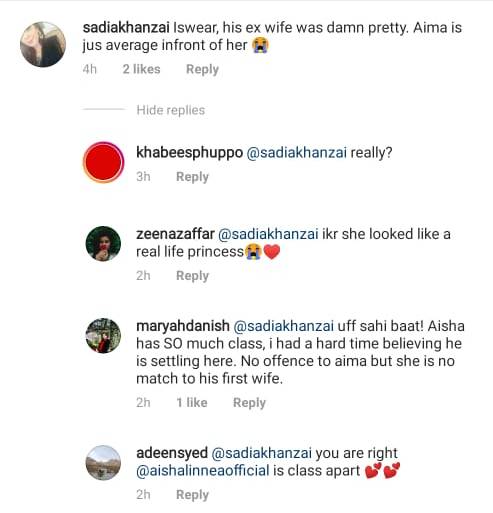 Though, there were still people that warmly welcomed the two and made sure to compliment their chemistry.

This is an undeniable fact for their fans!

Looks like the rumors between Sahir and Aima after they featured together in Coke Studio were truly only rumors!

Babri Masjid Verdict VS Kartarpur Corridor: A Struggle For Peace And Hatred
Schoolbag Weight Of Children To Be Less Than 15% Of Body In KPK
To Top