Ahad Raza Mir Is Up For A Nomination At Betty Mitchell Awards For Hamlet|Parhlo.com

Ahad Raza Mir has been in the theatre business for a while now. Moreover, that’s what he did before making it to the big screens. Now, his role in Shakespeare’s Hamlet is putting him up for an international nomination!

He is nominated in the Drama category for his Outstanding Performance as an Actor. The Betty Mitchell Awards will be held on June 24th, 2019. And Pakistani’s are more than just excited.

The Play’s Background And His Thoughts:

The play was in Canada from 20th March to April 13th. Mir seemed to prove himself as a worthy and talented theater actor by completely engrossing himself into his character. Even his mother mentions that she was scared to see his appearance and performance, as he looked like someone else. Moreover, Mir also said that his clothing was altered according to his ethnicity to give it a proper ‘desi vibe’, “To suit me, they definitely gave Hamlet’s costume a desi vibe,”, he shared. 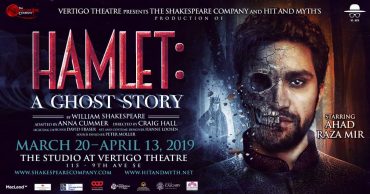 The actor has been content to go back to his roots, which was theatre acting, and being able to excel in it. Mir said, “I was called back to play a lot of roles I wanted to take on but couldn’t, and the calls would keep coming. That means that I still have a home here. People think of me enough to go, ‘Hey, let’s give him a call and see if he wants to play a role. This time, for Hamlet, it worked.”

“I wanted to return to the stage as I haven’t been on it in so long! I also just wanted a challenge and to be honest with you, when I’m in Pakistan, I’m just at my house because if I go outside it can be kind of hectic at times. While I love taking selfies and I love my fans, I just needed this break.” He further adds in.

Within a limited amount of time, Mir has become famous for his gorgeous looks and extraordinary acting skills; In addition to being super humble throughout his journey. 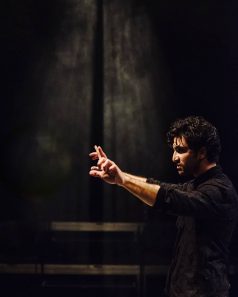 Many of us might look at this with the ‘good for him’ mentality but there is a bigger picture that needs to be painted a bit better. Considering that this play was in Canada, it remains at an international exposure. To see a Pakistani man acting in Hamlet while there is zero stereotype labeling on him can make you wonder.

This is just another tiny step for the Pakistani community abroad. Not only has an actor of Pakistani ethnicity successfully captured hearts through a theatre play but he is also in nomination for a well-known international award! This isn’t only a proud moment but it promises a bright future for Pakistani actors making it big in the West.

Once, we can easily see brown people in movies without the hurtful labels then there is hope for us to properly make our way into international showbiz.

This user is satisfied with the actor’s success, “Words Fall Less To Praise What You Have Achieved Through “Hamlet:A Ghost Story ” We all saw the months of hard work and effort you have put in for this role, Ahad Raza Mir Just being nominating is an honour because for us you already won”

Words Fall Less To Praise What You Have Achieved Through

We all saw the months of hard work and effort you have put in for this role @ahadrazamir
Just being nominating is an honour because for us you already won.#AhadRazaMir #HamletAGhostStory pic.twitter.com/VqYhuBkhc7

Once again a mature appreciation, “Congratulations Ahad Raza Mir for getting nominate at Betty Mitchell Awards for you play Hamlet (A Ghost Story). This is huge man. So Happy to see our generation representing our Country so well”

Congratulations @ahadrazamir for getting nominate at Betty Mitchell Awards for you play Hamlet (A Ghost Story). This is huge man. So Happy to see our generation representing our Country so well ?#AhadRazaMir #Hamlet pic.twitter.com/FTBfsXjhpi

Very well said, “Don’t be jealous of other people success. They have their path and you have yours. Try to learn how to be humble and not to be jealous of other actor’s achievement. Keep your head down & concentrate on your own work rather. Thank you”

Don’t be jealous of other people success. They have their path and you have yours. Try to learn how to be humble and not to be jealous of other actor’s achievement. Keep your head down & concentrate on your own work rather. Thank you @yasirhussain131 #AhadRazaMir #YasirHussain pic.twitter.com/oZ98awxkOQ

Such enthusiasm, “All The Best Ahad Raza Mir Bohot Bohot Bohot Sari Duayain… WE ARE SO SO SO PROUD OF YOU LOTS AND LOTS OF LOVE”

All The Best @ahadrazamir Bohot Bohot Bohot Sari Duayain… WE ARE SO SO SO PROUD OF YOU LOTS AND LOTS OF LOVE ????#HamletAGhostStory#AhadRazaMir pic.twitter.com/puI5Mu9fa0

Mir is coming back on the screens with his finance Sajal Ali. The two broke the internet when they announced their engagement. This resulted in both positive as well as negative responses where fan girls were sad that the heartthrob isn’t a single pringle anymore.

Ahmad Raza and Sajal Ali will be hitting the internet once again with Farhat Ishtiaq’s romantic drama.

The two seem to have perfect chemistry as we can see in ‘Yakeen Ka Safar’ which is also a work by Farhat. Moreover, the director of the infamous drama ‘Suno Chanda’, Ahsan Talish mentions regarding the upcoming drama, “It’s a beautifully written story by Farhat Ishtiaq. It’s being produced by MD Productions and Ahad, Sajal and Adnan Siddiqui are the main characters. It’s a romantic thriller which we shot up in Islamabad and Shogran and will tentatively come out end of July, beginning August on Hum TV”.

Everyone is anticipating for the result especially after knowing that Ahad Raza and Sajal Ali are a couple and will show an even brighter chemistry on-screen.

So, what can his nomination teach us?

Any young and aspiring Pakistani actor or actress can see this as a motivation to work even harder. This can assist in the dreams of countless people hustling to become better theatre acts. This is exactly why seeking for fame and money is never the way to make it into the entertainment world. In the end, the success that you achieve through your skills and dedication is what can matter.

Read Also: Ahad Raza Mir has a Message for all the Artistic Students

We should realize our potential and keep striving for a day where our names can be plastered onto such prestigious awards. Pakistani awaam needs the undying motivation that can help us excel. We are so caught up in the ‘this is how life is’ that we barely try to achieve our aspirations.

What do you think of this achievement? Is the nomination right? Also, are you excited for the up-coming drama as well? Comment below to add your input.

Pakistani Animated Movies/Series That Deserve Appreciation Yet Are Underrated
‘George Ka Pakistan’ Is Questioning VIP Protocols in Naya Pakistan And Everyone Is Pretty Furious!
To Top