The current year is turning out to be a ‘hitching season’ for Pakistani celebrities. Every now and then either someone is getting engaged or married which creates a whole new reason for the fans to cheer. People who stay up to date with their favorite celebrity’s, keep an eye on every tiny detail from what they post on their social handles to what they are up to in future, it seems like a hard job to do but after all but fans are fans.

Celebs and their marriages!

As the actor-singer duo, Farhan Saeed and Urwa Hocane got married some time back, it looks like people from the industry were just waiting for their starry marriage. After that, Pakistani actors Ahad Raza Mir and Sajal Aly officially announced their relationship and their fans went crazy. Recently, in this year’s Lux Style Awards (LSA) actor and host Yasir Hussain also proposed to Iqra Aziz and their lovey-dovey act sure stirred a new controversy among the masses.

Just look at the adorable couple! 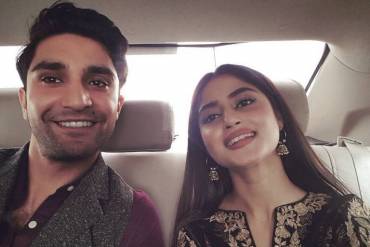 Well, among all the ‘marriage marriage’ chants from the entertainment industry, a beautiful couple is making their way to the ‘couple goals’ list. Because of the adorable exchange of comments, actor Ahad Raza Mir and Sajal Aly manage to stay in the limelight from time to time. Earlier this week, Sajal Aly posted two pictures on her official Instagram and Ahad Raza Mir’s cutest remarks on the pictures are making everyone go gaga over them.

Just look at the amazing couple showing true love for each other!

It is not the first time the couple has commented on each other’s post. The actor-duo have been open about their relationship from the start and has even worked together on different projects. Their projects have always gathered a lot of appreciation from Pakistan as well as from across the border. Fans are now just waiting for them to officially get married soon.

Had fun reading the article? Let us know in the comments below!

Taxes Might Be Imposed On Graves Too Now In Lahore, Ab Marna Bhi Mehnga Parey Ga!
The First 10 Days Of Dhul Hijjah: Days To Reap Rewards
To Top