Hina Altaf and Agha Ali, the latest celebrities to tie the knot have been the talk of the town for a while now. Both the Pakistani actors left everyone in shock after revealing their wedding pictures on social media. However, there were no rumors about their dating or anything related to their personal lives.

The celebrity couple got married in a simple yet elegant wedding ceremony in May of this year during the lockdown. Since then, Hina and Agha, with their love-filled pictures have been gathering the love of their fans and followers. Unlike every other celebrity who shows off their marriage proposal, this couple decided to keep their private life away from public eyes. Nonetheless, in a recent interview, the Mehram actor Agha Ali revealed how he proposed the love of his life. 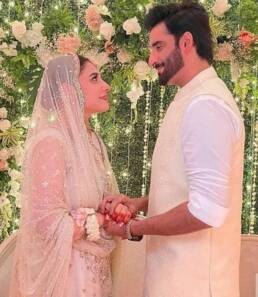 In addition to this, the celebs are constantly active on social media interacting with their fans- from constant Instagram updates of their wedding ceremony, to the lockdown activities. Both the young actors worked in a Pakistani drama serial Aatish.

Agha Ali asks Hina Altaf for one thing before getting married

Recently, the newlywed young couple appeared in Nida Yasir’s popular morning show ‘Good Morning Pakistan’. In the interview with the renowned actor and show host, Hina Altaf talked about what Agha made her promise before tying the knots. 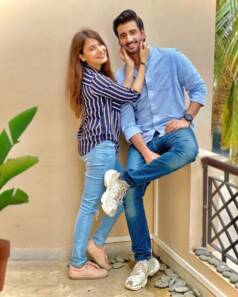 The Rabba Mainu Maaf Kareen actress began sharing that, “Before we got married, Agha showed me a picture. It was not my picture, it was of someone else. So, he shows me the picture and says…” Agha cuts her off and says, “No, not this. I made her promise only one thing before marriage. I said that I don’t want anything else, just promise me one thing…”

Hina interrupts and says, “Don’t ever get fat,” to which Agha proudly responds, “That’s all I asked.” In addition to this, Hina also talks about how whenever she is having food, Agha would always remind her of the promise she made by saying “I only asked you for one thing.” 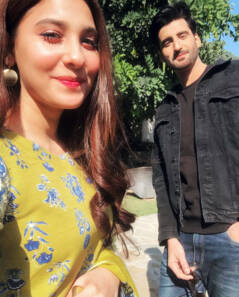 Furthermore, the morning show host then goes onto asking Agha if he was asked for anything in return. He replies, “Well, all she said was, yeah you too.”

wtf is cute about it??? it’s disgusting and he’s feeling proud about it pic.twitter.com/VSHW6ZyJlB

People have been calling out the actor Agha Ali for body shaming. Well, obviously, how is this even cute? However, somehow the Mehram actor seems to be finding it a source of pride. We can see the way he responded to it, “That’ it. That’s all I asked for.” Really, is that all you are asking for? Trivializing body shaming?

Laughing off and playing down such a huge social issue, that too on a morning show which thousands of people be watching. Well, sure this is their personal life, and might as well be something very minor among them. However, being in the limelight, they should know better.