We all probably have faced situations where our inexplicable anger leads to the breakage of materials and possessions in our households. It is somewhat an obsession to pass your anger and resentment to something and let it fall to pieces. It may sound scary why the human mind behaves in a certain way and why aggression feels comfortable when you are boiling with rage. You might have done it before or surround with people who simply incur their wrath on stuff that’s closest to them.

Shahid Afridi, the legend whose known to belong from Northern area of Pakistan and let’s admit it, people from the North are usually thought to be extremely aggressive in our culture (stereotype alert). In other words, Pukhtoon people are ultra jazbaati… There goes a stereotype and we have believed it all our lives. So, keeping that in mind, what would happen if people were totally angry about something? Absolute mayhem – our very own Shahid Afridi reveals once why he did what he did…

Here’s Shahid Afridi in his own words; the reason is funny and thought-provoking at the same time

Indian dramas… Dayum. Well, if you have a look at these weird and obnoxious dramas that were once aired heavily on television and amassed viewership of Pakistans to an unimaginable level then you will empathize with him. Considering the conditioning of mind that these dramas incur, it is pretty valid to prevent people around you from watching it. Afridi was being Afridi and just as he’s always looked aggressive on the pitch, he went full throttle against that poor television and broke it into pieces. That’s one way to get around it… 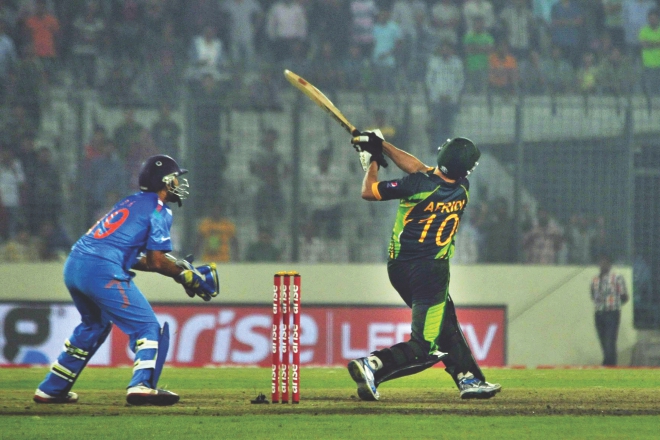 Thank God, the Indian dramas are no longer aired on television and our viewership is no longer crazy about them. If Indian dramas were still there, then we would also have to unleash the Shahid Afridi in us and smash our TVs to prevent Indian content from taking over. Talk about how they focused every scene and put a noisy bang to emphasize on little things, it’s really good that our people have stopped watching them. Also, big thanks to our Pakistani entertainment industry for producing brilliant and 10x better content that people absolutely love it.

Would you react the same way as Shahid Afridi did in his home over something you do not like?

Share
Tweet
Share
Share
Email
Recent Posts
Trending Posts
Novel Coronavirus Awareness Message
Avoid touching your eyes, mouth and nose.
Avoid close contact with individuals that are sick.
Clean household objects that are frequently touched.
Wash your hands regularly for at least 20 seconds
Urdu
6 Tips To Make Your Soul Happy
I Am A Literary Classic And This Is How You Are Treating Me…
To Top