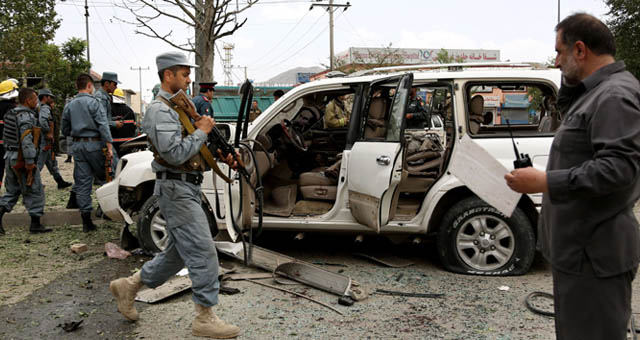 A suicide bomber and a roadside bomb have struck the convoy of Afghan presidential candidate Abdullah Abdullah as it left a campaign event in the capital Kabul, the Interior Ministry said.

In a televised statement shortly after the attack, Abdullah said that several of his security guards had been wounded in the attack.

The interior ministry spokesman said the number of dead was likely to rise, the Associated Press news agency reported.

The assassination attempt on Abdullah came ahead of a second-round presidential election on June 14, which Taliban fighters have threatened to disrupt.

No group has so far claimed responsibility for the attack, the AFP news agency reported.

Afghanistan is in the middle of elections to choose a successor to President Hamid Karzai, who has ruled since the fall of the country’s Taliban government in 2001.

Abdullah fell short of the 50 percent threshold needed for an outright victory in the April first round and will face former World Bank economist Ashraf Ghani in the run-off.

US President Barack Obama recently outlined the US strategy to end the war in Afghanistan, saying the US presence in the country would be scaled back to around 9,800 troops by the start of 2015.

The drawdown relies on Afghanistan signing a long-delayed Bilateral Security Agreement laying out the terms of the US military presence in the country after this year.

The outgoing Karzai refuses to sign the pact, but both Afghan presidential candidates have vowed to sign it if elected.