Today I am going to tell you a story of an Afghan boy who you may have caught wearing a Lionel Messi shirt made out of plastic on social media. How it has accumulated till now will certainly restore your faith in humanity.

Meet, Murtaza Ahmedi, a six-year-old boy who has a craze for football idols just like many of us. We all have our favorite teams and players who we dream to meet once in our lifetime.

Murtaza has gone from wearing a plastic bag shirt with Messi’s name on the back to receiving a genuine shirt from Messi himself and to finally meeting him.

Murtaza fled from Afghanistan to Pakistan, met his idol in Doha, where FC Barcelona have visited for a friendly fixture against Al Ahli.

It’s amazing how only this January, the pictures of little Murtaza (Afghan Boy) wearing a plastic bag with “Messi 10” written behind played in his town and got noticed by people.

Shortly after the pictures went viral and circulated all over on social media, it came into Messi’s knowledge. Realizing the potential here, Messi opted for a beautiful gesture one could not imagine. He himself sent him a genuine jersey.

The job was not done yet. The little boy still was to be impressed by his idol. Murtaza’s luck spun and opened an opportunity for him when he got a chance to meet Messi in Doha.

Leo Messi finally meets the young Afghan boy who made a Messi shirt out of a plastic bag! pic.twitter.com/kXkoPy9M9y

On 13th December, Murtaza (Afghan Boy) not only met him but also walked down the pitch as Barcelona’s mascot for the game. He was full of joy and made every moment count of his time with his idol. He was in no hurry to leave the pitch and repeatedly ran after the player he admires.

The gesture my Messi has certainly brought the world to shower praise on his character and conduct. It shows the level of humility of a player who’s counted in the likes of greatest football players to grace this world. 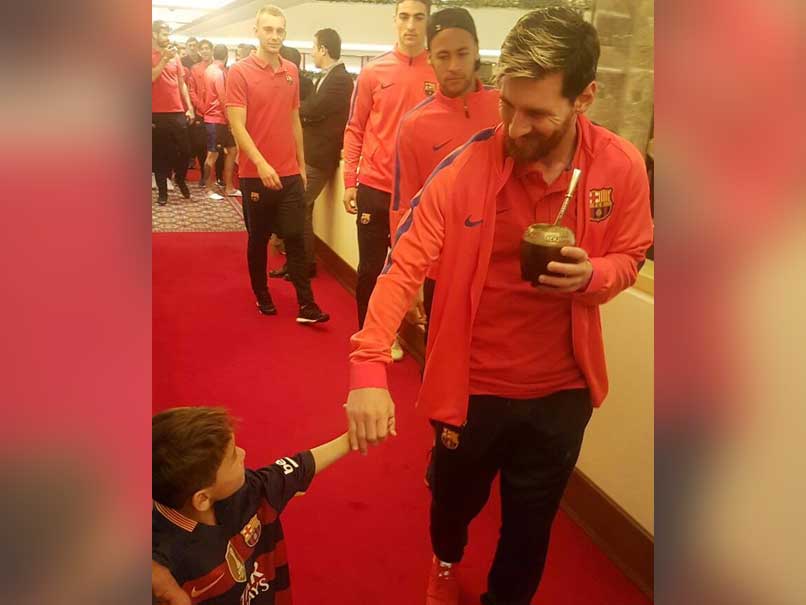 The meeting was arranged via United Nations refugee agency, UNHCR. Their commendable efforts have certainly made a boy’s dreams come true.

However, Murtaza’s rise to fame has not been welcomed. It has forced his family to seek refuge in Quetta, Pakistan since his father reports to receive threats. The family resorted to such measure fearing abduction of the little Messi.

His father previously said, “I sold all my belongings and brought my family out of Afghanistan to save my son’s life as well as the lives of the rest of my family.

“Murtaza hopes that one day he would be able to meet his hero, Messi.” Source: The Guardian

AND HE JUST DID!

English Premier League: Chelsea Keeps Winning, Costa Keeps Scoring And Man Utd Win At Home After 78 Days
This Couple Decided To Celebrate Their Wedding In The Most Inspiring Manner
To Top