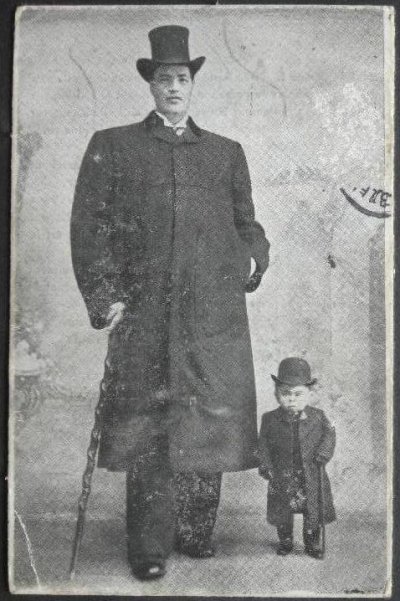 It might sound unbelievable, but there was actually a man who was both a dwarf and a giant over the course of his lifetime. This case is so extraordinary that there is only one documented instance of it in medical history.

In 1899, Adam Rainer was born in Austria (Graz), to average sized parents.

Adam Rainer tried to enlist in the Army when WWII broke out, but he was rejected as he had a height of 4’6.3 inches and was deemed too weak and short. One year later, Adam Rainer tried again, the army rejected him once again on the basis of his height, even though he had grown a full 2 inches.

Although Adam Rainer had a short height, but the medical report from that period suggest that Rainer had unusually large feet and hands for his height.

After three years, his feet had doubled to a size EU 53 (US20), although his height remained static (relatively). Shaquille O’Neal, US basketball player wears shoes sized US 23.

But all this changed, when Adam turned 21.

Over the next 10 years, he grew from almost 4’10 to an astonishing 7’1. During this period of time, Adam Rainer also began to develop a severe spinal curvature. 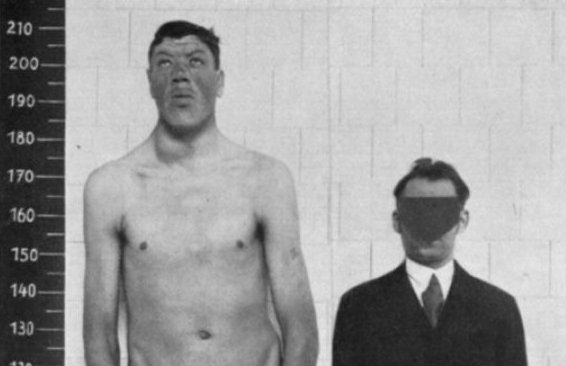 The cause behind Adam Rainer’s growth spurt:

Adam Rainer was examined by Drs A. Mandl and F. Windholz, (between 1930 and 1931) they discovered that he was suffering from a medical condition known as Acromegaly.

In the case of Adam Rainer, it was caused by a tumour on his pituitary gland which resulted in overproduction of growth hormones in his body. Acromegaly was the reason behind Adam Rainer’s strange appearance; he just did not have unusually large feet and hands. Adam Rainer also had thick lips, widely spaced teeth and a protruding forehead and jaw.

Images of man with Acromegaly – The effects of this syndrome can be seen on his facial features:

The doctors decided to operate, even though they believed that the chances of success are slim given the fact that the tumour had been growing for more than 10 years. Adam Rainer was measured again few months after the surgery. His height remained the same, but his spinal curvature was more severe, hinting that Rainer was still growing, although at a much slower rate.

The health of Adam Rainer continued to deteriorate. He began suffering hearing loss in his left ear, and lost vision in his right eye. Over the period of time, his spinal deformity became so distinct that Adam Rainer was confined to bed.

Adam Rainer died at the age of 51, measuring 7’8 inches. Some of the newspapers reported Adam Rainer’s height as 7’10 inches. Adam Rainer is the only man in the history to be classified as both a giant and a dwarf. He truly is a testament to the marvels of human body.

Chibatman – An Unknown Superhero like No Other!
Apple iPhone 6 and iPhone 6 Plus Announced! It Is Beautiful, Like Samsung.
To Top