They say when Allah Almighty wants to change something, he does so without any hesitation. That is the belief this man from Lahore still holds very dear to his heart. This is the story of an old man, who has lived most of his life. He has seen best of the both worlds, the carefree life of the world and one that prepares for the hereafter.

Meet Sufi Bashir Ahmed, a former actor, who turned into a tableeghi after his mother wouldn’t pray for him. Our friend from Daily Pakistan, Ibtasam Chaudhry caught up with Sufi Bashir, who now spends his life spreading Islam.

Sufi Bashir wasn’t always a tableeghi, neither was he a very religious person. But one incident of his life changed everything. Thirty years ago, Sufi Bashir was a renowned Pashto film actor. Not only did he 70 odd Pashto movies, but he was a renowned star of the industry who had worked with the best in the business. 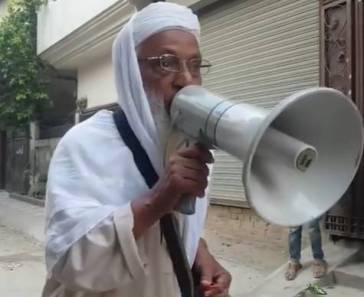 Sufi traveled the world on his actor pass, most the Emirates, but all the way to London. He lived the high life, earned a lot of money, and had the best fame possible. However, there was one thing that always irked him. Whenever Sufi asked his mother to pray for him, she would remain silent.

All the years Sufi worked in the entertainment industry, never did his mom pray for him. He recalls, one day, he was going through a tough time and when he visited his home in Peshawar, he asked his mum to pray for him. However, she denied it. Sufi Bashir asked her why she wouldn’t pray for her son. To this, she said that the work he did was not the teaching of Islam, neither his family.

That day Sufi Bashir asked her to pray for him, the way she wanted. When he returned to Lahore, he met an accident. While recovering, he realized that this was Allah’s sign and his mother’s prayers. From that day, till today, Sufi has spent his life spreading the cause and name of Islam as a tableeghi.

Riding an old motorcycle, carrying a message, Sufi goes through the streets of Lahore preaching Allah’s powerful message. When he was quitting showbiz, people asked him how he would feed himself and his family. To this, Sufi said, it was Allah who would take his responsibility and till today, Sufi continues to keep the same beliefs.

Sufi Bashir might have not earned a lot in this world, but his Hereafter surely is protected. He pleased his mother’s wish and the wish of his Maker. Surely, no wealth can compete with that.